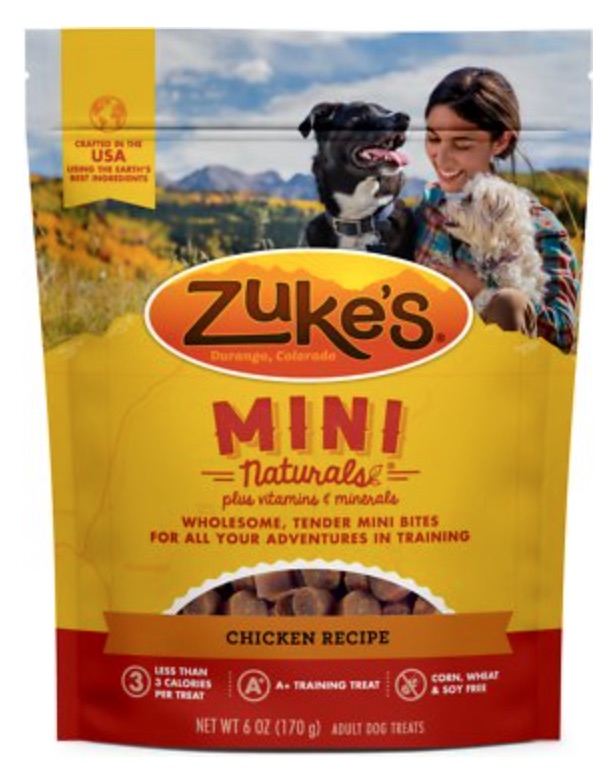 Zuke’s Mini Naturals Training Treats have been one of my dog’s favorite motivators in our training sessions throughout his puppyhood. While he is overall more praise-driven than food-driven, these treats have been an exception for him. They have played a crucial part in teaching him to lay down, turn around, and leash walk. As a result, I have gone through several bags of these treats now, and they seem to also be a very popular product for other puppy handlers. Earning them a 4.8 star rating from over a thousand reviews combined on their different flavors on the popular pet supply platform Chewy, Zuke’s has been praised for the quality of their formula and ingredients. In this review, we will be taking a closer look into the most popular recipe of their training treat line, which is the chicken recipe.

Unfortunately, despite the seemingly good intentions of the brand, the advertising of the product and the lack of information does not seem to align with their mission statement. Despite wanting to honor and act responsibly in accordance with nature, Zuke’s seems to lack transparency in that aspect with their production line and ingredient suppliers. The additional greenwashing clues from the advertising are also unsettling, especially combined with the lack of information provided by the ingredients. Going forward, I would like to see Zuke’s improve the transparency within their production line, and rethink their use of the word “natural” in their company philosophy. Until then, a good affordable alternative for Zuke’s treats is a good ol’ cooked shredded chicken breast.

One of the main selling points of Zuke’s chicken treats is that they are “natural”. Zuke’s company philosophy says that “nature gives everything our dogs need to keep going” and that this idea is the basis of their attitude towards sustainability. Specifically, sustainability to them means to “honor and protect nature”, as well as “ being intentional, resourceful, and continuously improving and renewing”. There is a lot of pretty dramatic language involved in Zuke’s company page, and my first thought was that there could be some green-washing occurring within the branding. Since “natural” is not a specifically regulated term, what does that mean for Zuke’s? How does Zuke’s honor and protect nature in the way they produce their treats?

To Zuke’s, “natural” seems to mean that the selection of ingredients should be “purposeful”, with high protein meats, nutrient dense vegetables and fruits, and vitamin content in the chosen formulation. They also specifically point out leaving out corn, wheat, and soy in all their products, implying that these ingredients are not purposeful. While it is ultimately up to a veterinary nutritionist or professional to confirm the dietary needs of each individual dog, it is interesting to think that Zuke’s associates the term natural with the nutritional contents of a particular ingredient, rather than how the ingredient is derived.


Furthermore, the claims of being natural are particularly debatable. Since barley extract and vegetable glycerin are not found “in the wild”, what does it mean for them to be natural? In addition, since chicken, barely, and rice are domesticated forms of former wild versions of the same animal and crops, can they still be considered natural as well?
While I do not doubt that the ingredients chosen are beneficial for my dog, there seems to be some discrepancy between the marketing basis of the product and the product formulation itself.

As for the ingredients themselves, the source of the chicken used is not disclosed, so it is not specifically known what kind of facilities, hormones, or diets that the chicken was subject to. Even if subject to fairer living conditions, the environmental cost of producing poultry is high and directly contributes to the emission of greenhouse gases and climate change on the planet. Rice and barley production is directly impacted by the climate change induced by poultry production, since the increase in temperature and impeding droughts shortens the rice production season and decreases barley production (and also impacts the production of barley extract).

As mentioned earlier, Zuke’s is not transparent about where they source each of their main ingredients. As for ingredient processing and manufacturing, they state that their production quality exceeds the requirements for the Association of American Feed Control Officials (AAFCO) standards for pet food. When navigating the page of AAFCO, it is not particularly clear what these requirements are, aside from certain labeling standards needed for packaging. The actual content regulation for ingredient formulation is not to be found. They do state that their ingredients meet the stringent US quality standards, but the guidelines for those standards are not specified either. Upon some investigation, I found that requirements for pet food specified by the FDA only require the food to be safe to eat, produced under sanitary conditions, free of harmful substances, and properly labeled. Further specifications of these requirements are not provided.

With the lack of transparency towards their manufacturing process, it is difficult to understand how Zuke’s logistically intends to honor and protect nature in their production process.

With unclear information on which particular facilities are responsible for Zuke’s production line, it is even harder to discern who works in this production line, as well as their treatment and employment rights. It is also hard to understand the relationship between Zuke’s and their ingredient suppliers. Zuke’s only states that their partners have been providing quality ingredients to their production line for a long time, but the nature of their relationship and the way their suppliers operate remains unknown.