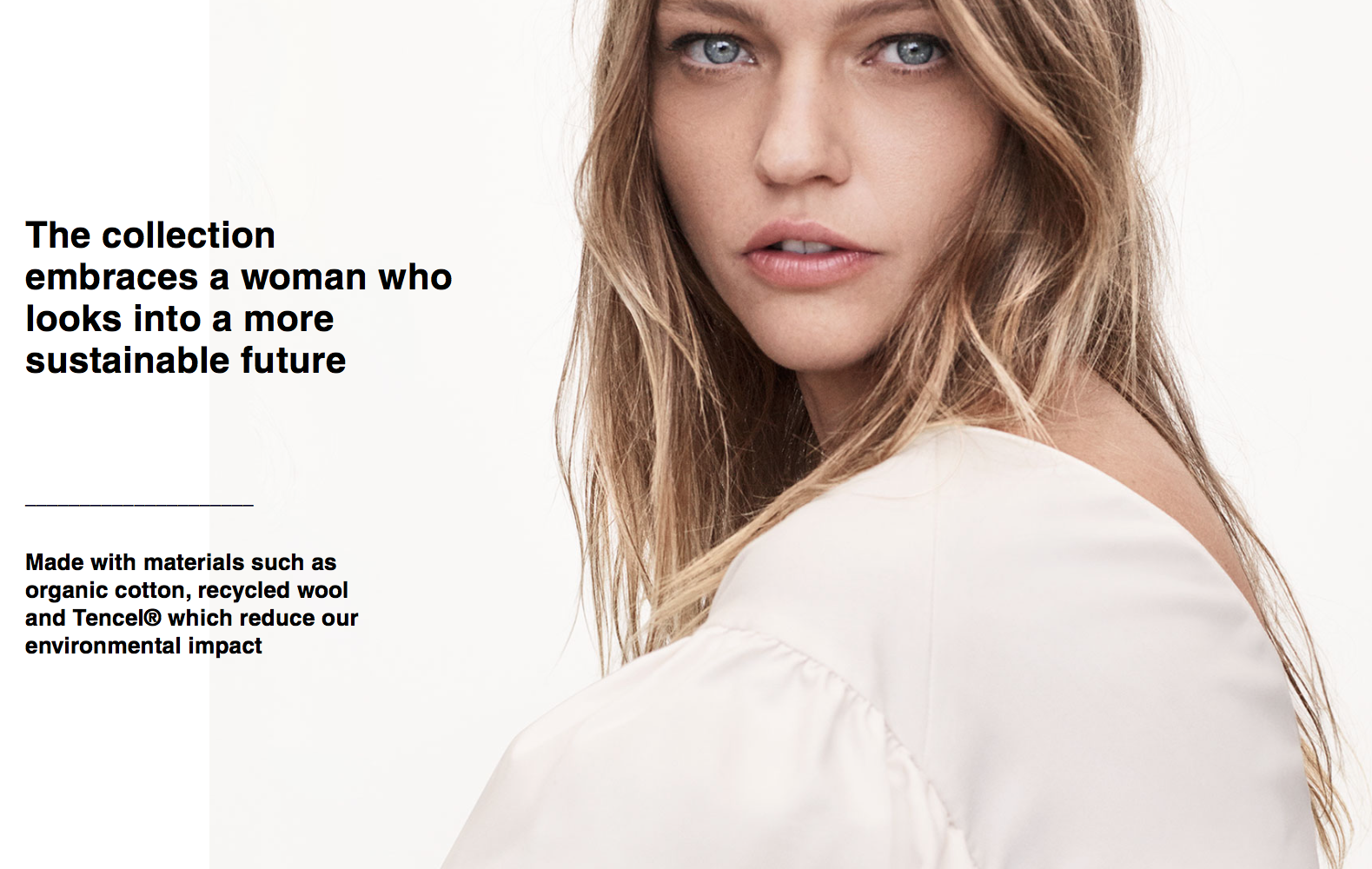 ZARA is a multi-national fashion company which consists of almost 3000 stores across 96 countries and is owned by parent company Inditex. Although the company claims they are not within the fast fashion industry, arguably this is incorrect due to the company’s reliance on excessive purchasing of minimal usage clothes, which is evident through their annual release of 24 trend-led collections comprised of 20,000 new designs (approximately 500 new designs weekly).

In 2016 ZARA launched their ‘Join Life’ collection, which was their first range of products to move towards more sustainable processes and materials for their products. All clothes with Join Life sewn into the label have been produced using raw materials and processes to help ZARA reduce its impact on the world. In addition to this ZARA published their environmental commitments in 2019 as part of their sustainability strategy. However, for such a huge retailer, you would expect more action to have already taken place and for ZARA to lead the way for smaller less profitable companies, but this is not the case at all.

It is claimed that all the products within the Join Life collection are made with at least 50% sustainable fabrics. The sustainable fabrics which ZARA regularly use for products are as follows: organic cotton, recycled polyester and Tencel. Despite this sounding positive, sustainable fabrics can still have a large impact on the world and its environments, which unfortunately can lead to green washing consumers into thinking the products within ZARA Join Life are much more environmentally conscious than they actually are (although this behaviour shouldn’t be occurring I am not shocked to see this from a fast fashion brand). Firstly, organic cotton, although being pesticide free which is an environmental positive, requires a large amount of land and water to successfully grow and farm. Secondly, recycled polyester avoids the need to extract new materials, however, it can cause extensive microplastic pollution during the washing process of the synthetic material. Finally, Tencel, which is a manmade fabric made from wood pulp that has been chemically processed, has been ranked as the second best sustainable option for fabrics but ZARA will not be clear on the true impacts of this material.

Despite the efforts being made to increase sustainable fabrics within ZARA products there are still big improvements to be made. A good starting place for ZARA would be to increase transparency with resources used/required for their product life cycles, so that consumers can gauge how impactful the actions they’re taking actually are. Additionally, for such a large multinational company, more investment could be made into increasing the sustainable fabrics from one collection to all products, as well as the sustainable fabrics making up 100% of garments instead of just 50%.

Moreover, ZARA have implemented an animal welfare policy, this policy bans the use of fur, angora, and animal testing within their clothing products, but allows the use of materials such as wool, leather, and exotic animal hair. Once again making it difficult for consumers to gauge an understanding on the extent to which this policy is actually impactful for animals and wildlife.

Even though ZARA publish that 50% of the fabrics used to make their Join Life collection are sustainable fabrics, the lack of transparency the company has when disclosing the total number of resources required for production makes it extremely difficult to gauge the manufacturing process of Join Life products as well as how impactful the use of 50% sustainable fabrics actually is. Moreover, the lack of clarity to publicly share the Join Life’s manufacturing process, in itself leads to questions about the true impacts of these processes, because if they weren’t damaging to the planet there would be no need to conceal this information.

On the contrary, in 2016 ZARA introduced a repair and reuse programme for their product called ‘Closing the Loop’. This programme allows shoppers to drop off their used garments in-store or through the post, and then these garments with be recycled in order to try and make productions within ZARA more circular. However, as an individual who has previously purchased from ZARA, the presence of this scheme is not very well known to consumers, therefore, this programme is potentially not being used to its maximum potential meaning that production/manufacturing of garments is still yet to become a circular process.

ZARA products are made all across the world. Inditex, the parent company of ZARA owns twelve clusters of factories worldwide, there locations are as follows: Spain, Portugal, Morocco, Turkey, India, Bangladesh, Cambodia, China, Pakistan, Argentina, and Brazil, and within these clusters of factories is where 92% of clothing production occurs. The initial concern of having such a wide spread of factories across the world is the carbon footprint ZARA are now giving themselves through the shipping of materials and resources to the factories, then the shipping of finished products back to stores all over the globe. Considering the extensive sustainability goals ZARA have set themselves (as seen on their website), processes of transportation like this need to be considered so goals can actually be met instead of empty promises used to green wash consumers.

In 2016 ZARA was involved with a scandal whereby 140 workers within one of their Turkish factories were not paid for their work across a time span of 3 months, but this could have been longer. These workers were hired by Bravo Tekstil, which was a manufacturer that used to produce items for ZARA, but shortly after the scandal the factory was closed down. Another case of unpaid workers for ZARA was found within their Istanbul factories, this neglect for workers was discovered when factory employees began hiding notes in pockets of garments they had made to inform consumers they were not receiving a wage, one example of a note was “I made this item you’re going to buy, but I didn’t get paid for it”. In addition to not paying workers, ZARA has also received accusations of using slave labour, child labour and exploiting Syrian refugees. Until all of these unethical treatments of employees are eradicated from ZARA’s production processes they will never be able to classify themselves as sustainable.

In 2020, employees of the Huabo factory in Myanmar, which also produces clothes for ZARA, released claims that they were being made to work 10 hour days, 6 days of the week, on a wage of £2.44 a day. Contrary to this, the owner of ZARA is thought to be the sixth wealthiest person on the planet with a net worth of £59 billion, but on regular occasions fails to pay workers a living wage or altogether.

Conclusions:
Overall, I believe that such a large multi-national company like ZARA with huge annual turnovers as well as being owned by the sixth wealthiest human on the planet, should be expected to be making more of an effort sustainably and should be investing more money in becoming sustainable across all aspects of their business. Employee welfare and well-being also needs to be reconsidered on a global scale. Finally, the implementation of programmes such as the ‘closing the loop’ scheme need to be conveyed to their consumers so that all have awareness of the schemes and can get involved at their own accord.