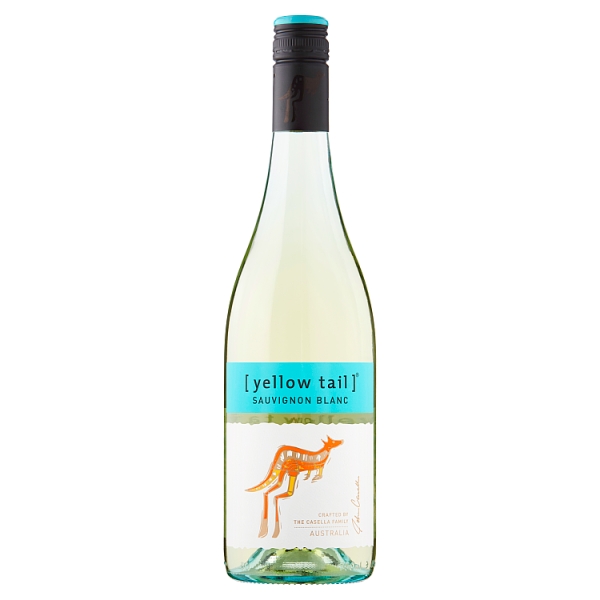 Yellow Tail is an Australian wine label owned by Casella Family Brands. It’s a pretty popular brand in the UK as it’s relatively affordable (this Sauvignon Blanc is £7), yet still tastes alright (score!).

However, since I only encountered one webpage of information on Casella’s corporate social responsibility and no sustainability information on the Sauvignon Blanc itself, my research on a product level has resulted in being rather unfruitful. Casella Family Brands are too vague with the information they put on their websites regarding sustainability, and a common pattern I’ve found with other wine brands is a severe lack of information on sustainability at the product level. I want to know how sustainable this wine is: it takes about six gallons of water, on average, to make one gallon of wine... so how much water goes into making a gallon of this wine? We can see the cosmetics and apparel sectors gradually moving into product-level specifics, so there’s no reason why we shouldn’t be able to have this in essentially every other sector out there.

The grapes that make up this wine are from vineyards in South Eastern Australia, and New Zealand. Confusingly, Casella states that their vineyards are all based in Australia, so we don’t know what this means for the outsourced New Zealand portion of this wine. Therefore, all of what Casella says about their environmental practices I can only apply to a portion of what makes up this Sauvignon Blanc. However, the New Zealand government has implemented its own environmental standards that winegrowers must meet, which is encouraging to see. Some of the areas for which New Zealand has set standards include the sustainability of soil, biodiversity, air, energy, and business. With regard to Australia, it seems that their take on environmentally-friendly winegrowing is an opt-in system to their national programme, Sustainable Winegrowing Australia (SWA), rather than having governmental requirements to meet sustainable standards. Yellow Tale / Casella don’t mention whether or not they are a member of SWA, so I can assume that they aren’t, or else they probably would’ve proudly stated it.

The Sauvignon Blanc is described as suitable for vegans (a fair few wines actually aren’t). When wines are vegan, this tends to be because the filtering process doesn’t use animal-derived fining agents that are more traditionally used, like egg albumen, gelatine, or chitin (crustacean shell fibres). The issue here is that we don’t know what vegan fining agent is used by Yellow Tail instead, and whether this alternative is environmentally superior to animal-derived products.

The Sauvignon Blanc bottle is marked with the Mobius loop, which is the symbol which expresses something as being capable of being recycled. Casella is a signatory to the Australian Packaging Covenant Organisation to address a reduction in its packaging’s environmental impacts. Casella says that they engage in initiatives to reduce their packaging’s weight, optimise its efficiency, and investigate opportunities to divert waste from landfill. Although, this all does sound a bit like: ‘we’re looking at more sustainable packaging’, rather than ‘we will / already do use fully sustainable packaging’.

I could not find any information on specifically the Sauvignon Blanc’s production process - the irrigation, harvesting, pressing, bottling, or distribution. More generally, Casella mentions that they only use sustainable viticultural (winegrowing) practices with minimal intervention, which is of course good, but they don’t detail very much what makes these practices sustainable. They explain that for the past year they have been reducing their use of agricultural chemicals at their vineyards in Australia, and some of their sites in Australia use grazing sheep in the winter to reduce their herbicide usage by 50%. However, there is no way for us to know whether these practices apply to a site from which this specific wine’s grapes came from - Casella owns and produces about five other labels to which these statements could apply instead.

They do seem to have invested in a decent system for reducing water waste in their wine production, which is able to recycle over 160 Olympic-sized swimming pools a year. It’s unclear, though, how significant this is relative to the amount of wine produced by Casella annually, so this figure doesn’t mean a huge amount without some more context.

Casella states that they have regular audits to identify opportunities to save energy and monitor processes to ensure improvement of environmental performance, but we don’t know if these audits are independent or internal. This also doesn’t really seem like a strong enough statement for me to feel like they genuinely are making hefty - or even any - progress with their energy usage like brands these days should be. I’d like to see data on this from Casella and Yellow Tail!

Casella also doesn’t address their carbon footprint. Transporting the grapes from New Zealand to Australia, as well as the general production of the wine, plus the trip halfway round the world to be sold in England, for example, must lead to a pretty significant footprint!

A lot of the information given on Casella’s environmental efforts seems almost pointless to provide when we don’t know how or if it applies to the specific product a consumer might be interested in. Some of this information is incredibly general and still doesn’t include many figures to support their claims. I am unable to rate the Sauvignon Blanc any higher on its sustainability due to the (lack of) information I’ve been able to find. To give a higher rating with the amount of information I had at a product-level would be perhaps giving Yellow Tail the benefit of the doubt rather too heavily.