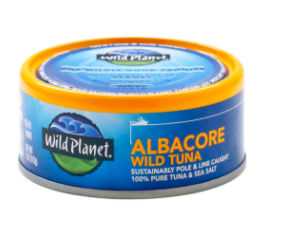 Changing industry practices is a great step in the right direction, and the company clearly has good intentions. However, the lack of accessibility due to the high price and minimal transparency does not further their sustainability agenda. Using pole and line fishing is much better than purse seine, but since only wealthy consumers have access to it, their theory of change will not sustain the global population. It is unsustainable to have constant access to high value goods like tuna, and it is our responsibility as consumers to reflect on the sustainability of our food choices.

Wild Planet’s canned tuna only contains albacore tuna and a little bit of salt. Albacore tuna are primarily located in the North Pacific ocean and in the South Pacific near New Zealand. According to NOAA fisheries, Albacore tuna are currently fished at a rate that is not threatening to their existence. However, the WWF (World Wildlife Fund) and a couple other sources say that this species is close to being under threat if the current rate of fishing continues. All of these sources are credible, so it is difficult to say with complete certainty that Albacore tuna are not under threat. Albacore is a much more stable species than many other types of fish, so I am giving this section a 2/3.

As you have probably seen in the news, many types of fish that are essential to marine ecosystems are being overfished to the point of collapse. If fish are caught at a faster rate than they are able to reproduce, then their species can be put in danger. There are also ways of fish farming that are more harmful to marine species than others. The most widely used fishing practice is called ‘pure seine’ fishing, which is a massive net that is cast into the water, scrapes the ocean floor, and brings up whatever is caught in it. This practice is detrimental because there is a lot of by-catch that comes with the intended species. All of the dead by-catch is tossed back in the water when they could have not been disturbed in the first place. Wild Planet uses a pole and line to catch all of their albacore tuna rather than a net. This makes sure that the local fish population is stable, so that it can be available for future generations. Wild Planet also supports a lot of legislation that protects certain areas of the ocean where some fish populations are especially endangered. Their tin can can be recycled if it is cleaned with soap so there is no oil left in it, and their productions are non-GMO certified. It is important to note that one can of Wild Planet’s tuna cost $4.59 compared to $1.29, which is the price of a typical can of albacore tuna. Obviously it takes more physical labor to use a fishing pole than it does just to cast a net, but I don’t see what other factors lead to that large of a difference. As overfishing continues and fish becomes more scarce, the price will go up, so it is imperative that there are more regulations put on fishing quotas so that $4.59 does not become $9.59 or even higher. I only gave a 2.3/3 because I feel as though there could be even more transparency about their manufacturing and distribution process as well as more information on their pricing.

The only information that I could find on their labor practices is that a 3rd party audits them, but there was no indication of what standard they are trying to achieve. There was also no mention of any type of fair wage. The lack of transparency in their labor practices is definitely concerning considering that working on a fishing boat is one of the most grueling jobs in the world.