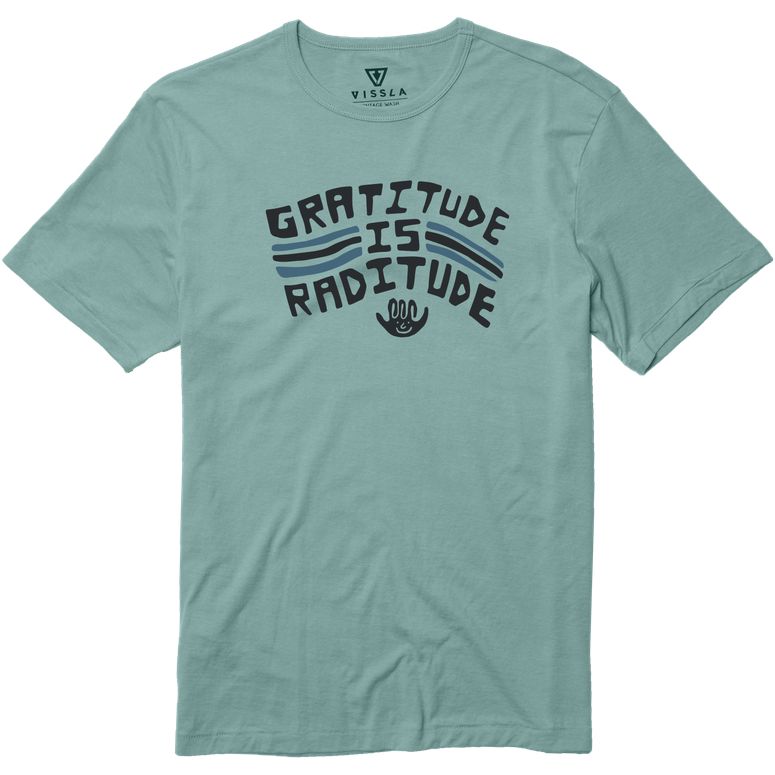 Gratitude is Raditude! A positive surfer-inspired mantra screen printed on a faded crew-neck tee is one of many items available as a part of Vissla’s More Mate Less Hate Collection. The collection, identifiable by Stefan Hunt’s youthful and colorful designs sprouting ~good vibes only~ messaging, includes upcycled coconut boardshorts (see another Voiz review on More Mate Less Hate Boardshort), tee shirts in various sleeve lengths, and bucket hats (although it appears that they aren’t all currently available on their website). This particular tee shirt design has only been produced into 30 single shirts made with 100% organic cotton and upheld by a strong but not super detailed supplier code of conduct. With the small production size, choice of fabric material, and general transparency in regards to supply chain, there is evidence of sustainability claims that Vissla proudly views as a part of its branding. However, the organic cotton claim isn’t super clear, and Vissla as a brand promotes a very non-inclusive, non-diverse surfing community through its stereotypical white-toned man with sun-bleached blonde hair aesthetic despite surfing’s Polynesian roots, which can have harmful sociological impacts.

Vissla claims this tee is made from 100% Global Organic Textile Standard (GOTS) certified cotton. This is a more sustainable choice compared to its conventional counterpart due to its reduced environmental and social impacts through the elimination of toxic chemical usage, GMO seeds, forced labor practices, and heavy metals. Be that as it may, there are two caveats to this claim.

First, there’s an asterisk next to the 100% organic cotton material composition that says, “*EUROPE PRODUCTION: Tees are made with 100% organic cotton but are not GOTS Certified.” This statement is incredibly confusing and seems to completely retract the GOTS certification claim. Additionally, it implies that only the European production of the More Mate Less Hate Tees isn’t GOTS certified, as in other suppliers/manufacturers located elsewhere have been GOTS certified. However, that implication contradicts a previous point about how only 30 shirts have been produced. It’s very unlikely for any company to produce such a small batch across factories in different continents as that would be unnecessarily costly. In an attempt to verify the decreasingly salvageable GOTS certification claim, I tried to identify Stokehouse Unlimited LLC (Vissla’s holding company) suppliers using Matchory to look them up in the GOTS certified suppliers database, but all of my database searches came up empty-handed. Also, I was unable to find any reference to the GOTS certifier or the supplier’s license number, which are usually supposed to be provided next to the GOTS certification logo. Unfortunately, these findings suggest that at least for this item Vissla has misused the GOTS logo to greenwash.

Secondly, if we give Vissla the benefit of the doubt and believe that these tee shirts are made with 100% uncertified organic cotton, there are still some sustainability issues to consider. If the organic cotton failed to meet the GOTS certification, it’s likely that the fibers of the tee from the farm are actually organic but other parts of the supply chain do not meet the ecological and social responsibility standards. Potential problems may include unethical labor practices or use of toxic chemicals during processing, and these problems can range anywhere from the spinning of the cotton into thread to the manufacturing of the clothing. In addition, even though organic cotton is a better alternative to conventional cotton and many synthetic fabrics, it’s important to note that the yield of organic cotton is about 25% less than traditional cotton. As a result, to produce the same amount of organic cotton, farmers need to dedicate more land and resources.

Appreciatively, Vissla’s holding company does release a Supplier Code of Conduct that “defines standards for fair, safe, and healthy working conditions and environmental responsibility throughout [their] supply chain” for its family of brands (Vissla, Amuse Society, D’Blanc, Sisstrevolution). The code of conduct addresses legal compliances, working conditions, chemicals management, discrimination/harassment, and implementation of the Supplier Code. I especially like the Monitoring and Compliance section where Stokehouse explains how they’ll maintain this high standard they’ve set for their suppliers through verifiable measures and inspections. It also clearly states that Stokehouse is only willing to work with suppliers that meet their high standards, which reassures Vissla and other Stokehouse brands customers and demands suppliers to do better.

While the range of topics addressed is positive as they are holding themselves accountable in many different areas, some sections have a rather vague description. For example, under the section entitled, “Environment,” all that is written is “Suppliers must comply with all local environmental laws applicable to the workplace. We encourage and expect best practices of sustainability.” What are the best practices of sustainability? Expecting sustainability is also a very different statement compared to ensuring sustainability. By using “expect”, it relieves Vissla or Stokehouse Unlimited LLC of accountability and places the responsibility on its suppliers.

Another example of a poorly defined section in the Code of Conduct is the Nondiscrimination segment. All that is written here is, “while Stokehouse recognizes and respects cultural differences, Suppliers must ensure employment – including hiring, remuneration, benefits, advancement, termination, and retirement – is based on ability and not on religious belief or any other personal characteristics.” I find it extremely odd that the author of this conduct highlighted religious belief and no other “personal characteristic.” Other anti-discrimination policies usually specifically name the areas in which people are habitually discriminated against. For instance, the Fair Housing Act in the United States explicitly states that it’s unlawful to discriminate on the basis of race, color, religion, gender, or national origin. By not including these characteristics (and others such as sexual orientation), Stokehouse signifies that these aren’t important enough to be mentioned, which undermines the experiences of various historically marginalized groups who also tend to be employed in clothing supply chains. In addition to including more detail to these parts of the conduct, I would also love to see at the very minimum some basic information regarding how many suppliers do they work with, where are the suppliers located, and some reporting to show that this Supplier Code of Conduct is really being upheld. Finally, there are some typos within the Code of Conduct and it hasn’t been updated since 2019, which is not a huge deal, but it does feel a little careless.

Vissla and its sister brands were started by Paul Naude in 2013, a notable figure in the surf industry from his experience with popular surf brand Billabong. When it comes to environmental sustainability, Vissla as a brand does do a fairly good job. They partner with the SIMA Environmental Fund, the Ecology Center, and the Surfrider Foundation, all great organizations working toward a better planet. 55% of Vissla products are made from more sustainable materials like more eco-friendly neoprene, upcycled coconuts, ecolastic, and organic cotton. On Instagram, they promote sustainability through their Simple Solutions series and sustainability ambassadors. All of these initiatives seem well-intentioned especially as the ocean is a big part of surf culture, and it’s great to see Vissla take such an active role when it comes to ocean conservation!

Regrettably, I have some criticisms for Vissla, which is why the planet score for this section is lower than it could be. First of all, they don’t really provide any information about who makes the products, who works at Vissla, etc. Instead, they do have a section of their website with profiles of their Creators and Innovators, about 30 surfer dude influencers who make up Vissla’s brand image. My main concern is that there isn’t a diverse range of people who make up these ambassadors especially when it comes to race. Most of the creators fit a very stereotypical Californian surf aesthetic (historically very white and very wealthy) which contributes to the erasure of surfing’s Indigenous roots. (See Voiz’s Instagram post on the Indigenous Roots of Surfing.) While it may not be Vissla’s intent to promote this culturally appropriated surf culture as the industry has been dominated by white and/or wealthier people, it can have damaging effects on people of color. In an article by Surfer.com, “Why surf culture desperately needs more diversity,” Justin Housman recounts a story where his non-white friend, the owner of a surf brand, had a racist experience with a customer who made a return citing the owner’s ethnicity as the reason for no longer wanting the items he had purchased. The lack of representation for people of color in surfing somehow leads to instances like these where customers only want to purchase surf products from white brands because that feels more like authentic surf culture. Although Vissla itself is obviously not individually responsible for the systematic inequalities in surfing, as an established brand that boosts its sustainability initiatives, it would be incredibly encouraging to see Vissla take greater action when it comes to diversity, equity, and inclusion.