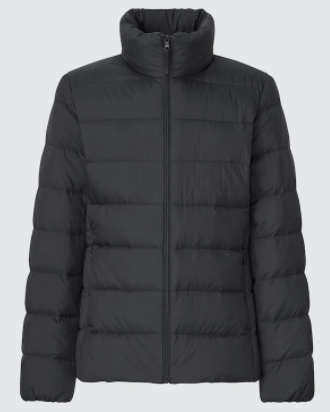 I myself own one of these jackets and love it. I wear it all over town and it is my go-to for a backpacking trip because of how warm it is and how tightly it packs. But I had no idea how it was made or all the steps it went through before making its way to me. I think that Uniqlo could be far more transparent and work to implement feasible sustainability goals with programs like Down Recycle giving an incentive to consumers that might actually motivate them to return their used jackets.

The face and back of the jacket is made from 100% nylon. Nylon is a synthetic material derived from petrochemicals. It requires even more energy than polyester to manufacture and 3 times more energy attentive than cotton. Its production also results in the release of nitrous oxide, a greenhouse gas. One statistic from Sustainable Fashion and Textiles: Design Journeys by Kate Fletcher states that “​​emissions from a single UK nylon plant in the 1990s were thought to have a global warming impact equivalent to more than 3% of the UK’s entire carbon dioxide emissions.” Nylon isn’t biodegradable, and so will continue to live on in our environment for many years to come. Natural dyes/low impact dyes also can’t be used with nylon, though the dyes that are used don’t contribute to as much water pollution as natural dyes do.

The filling is down, which is considered to be one of the most efficient insulators available. According to the International Down and Feather Testing Laboratory, "Down and feathers have the lowest carbon footprint of any other fill material, both natural and synthetic." But down does have the big drawback of requiring ducks and geese to be plucked, sometime while they are still alive. So it isn’t high on the buy list of vegan and those with animal welfare in mind.

Some companies like Tundra, Crux and Baskare instead use nest harvested down, down that comes from the nests of molting geese, or from a Eider, a sea duck. But as you can imagine that would be pretty pricey for the producer, and thus the consumer. At the very least Uniqlo could publicly announce that they won’t use live-plucked down in their products, as companies like IKEA, Marks and Spencer and Patagonia have.

Something to consider too in general when buying a product like this is not just its initial environmental and social costs but also the longevity and quality of the product, and whether that might outweigh the negative aspects. I do believe that there is something to be said for that here, but also there are easy steps that they could take to be more sustainable, that they are not.

As of September 30th, 2021, Uniqlo has launched a down recycling campaign, where customers that turn their down products back over to Uniqlo after use will receive a $10 voucher that can be used on new mens and womens down outerwear. The campaign is set to end March 31st, 2022. That is definitely a start, but thinking as a consumer myself, I’m not sure how motivated I would be to bring my jacket back in for just a $10 voucher. They haven’t given any statistics on the number of products they have had returned to them since the start of the campaign.

There is no public list of Uniqlo’s suppliers, though they do supply some basic information about their supply chain. They do not offer any sort of carbon offsetting for shipping both to consumers as well as just from manufacturing sites to stores and they haven’t made any of their emissions data public.

To understand a bit more about Uniqlo itself and its company practices, I had some help from some great fellow Voiz reviewers Disha Takle, Sayli Limaye, Zachary Moss and Chloe Cho. I’ve added their reviews below so check them out! Uniqlo was founded in Yamaguchi, Japan as a clothing apparel company. It is owned by Fast Retailing Inc. They published a 2022 sustainability report and the company has set the goal of using 50% recycled fabrics by 2030 and is shooting for carbon neutrality by 2050. Their Fashion Transparency Index score is within the range of 31-40%. They created a sustainability department back in 2016 and give in their 2021 sustainability report a timeline of their sustainability achievements to date. But in digging into them, many are very surface-level, various teams or campaigns like the down campaign that they have created. But there are no numbers of their carbon emissions or the amount of recycled material they are currently using in their products. So it very much gives the feel of green-washing.

Uniqlo has partnered with the United Nations High Commissioner for Refugees (UNHCR) and has said that they have donated more than 41.11 million items worldwide as of August 31, 2020.

In terms of working conditions, uniqlo has gotten significant pushback from the public in recent years as various scandals have arisen. There were investigations in both Hong Kong and China exposing sweatshop conditions, workers overworked and underpaid. As of 2020 they were in a legal battle with 2,000 Indonesian garment workers over $5.5 million in severance pay that the company is denying they have any responsibility to pay. The two Jaba Garmindo factories where these workers were based were also under investigation for labor rights abuses, including the firing of pregnant workers and the harassment of trade union members. Uniqlo stopped placing orders with them while this investigation was ongoing, leading to Jaba Garmindo’s collapse and the loss of 4000 jobs without compensation.