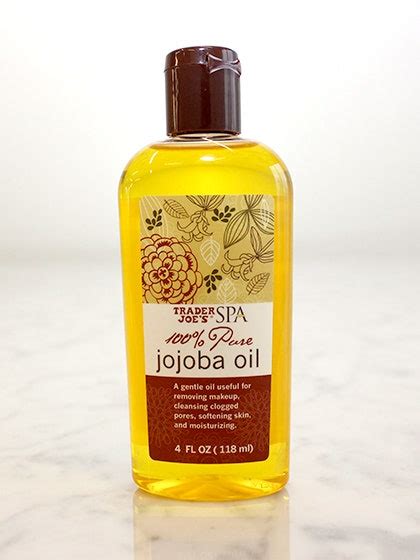 Trader Joe’s jojoba oil is a natural, low cost product that is great for your skin. Its only ingredient is jojoba oil, which ensures that it is not harmful to humans or the environment. It is unknown how it is made, as Trader Joe’s is extremely non-transparent about how they produce their products. While Trader Joe’s has made efforts to improve the sustainability of their company, it simply is not enough and seems to be bordering on greenwashing.

Trader Joe’s Jojoba Oil has only one ingredient: jojoba oil. This is great to see, as it means that the product isn’t full of unnecessary ingredients that may be harmful to humans or the environment. Trader Joe’s jojoba oil is marketed as useful for removing makeup, and cleansing, softening, and moisturizing skin. Jojoba oil is certainly an adequate ingredient for all these purposes; it is an amazing ingredient for moisturizing, and is full of nourishing nutrients, antioxidants, and minerals. Jojoba is a drought resistant plant and does not require much water, which makes its oil a relatively sustainable choice. While jojoba plants are farmed around the world, they are primarily grown in Latin American countries, which means it requires a substantial amount of energy to be transported to the U.S. Overall, jojoba does not seem to be particularly unsustainable, but it is not outstandingly sustainable either.

There is very little information about how this product was made, and there is no way of knowing who manufactured it or how it was done. Many jojoba oil brands have sustainable practices in their production, such as use of renewable energy and drip-irrigation, but we have no way of knowing how Trader Joe’s makes their oil. Generally, jojoba oil is produced by either expeller or cold pressing jojoba seeds, then filtering the oil. Trader Joe’s is cruelty free, which makes me feel comfortable with purchasing their products. However, I am very uncomfortable with the lack of transparency surrounding how their products are made.

This jojoba oil is distributed by Trader Joe’s, but there is no information about who exactly is making it. Trader Joe’s markets itself as relatively sustainable, and outlines their sustainability efforts on their website. In the beginning of 2019, they promised to eliminate more than 1 million pounds of plastic from their stores. Since then, they have claimed that they are in the process of carrying out that goal, through initiatives such as switching out the plastic sleeves on their greeting cards with a renewable, compostable material. They also claim to have recycled and composted large amounts of material that would have otherwise gone to a landfill; however, this information was not given in context, so there is no way to know whether it is actually a substantial amount. Trader Joe’s has attempted to make their packaging more sustainable as well, mostly by lessening the use of plastic. It appears that while Trader Joe’s has been making an effort to make their company more sustainable, a lot of their attempts are mostly for show, or borderline greenwashing. This is further reinforced by the fact that Trader Joe’s is infamous for continuing to use hydrofluorocarbons in their refrigeration, despite having been petitioned to stop. Hydrofluorocarbons are super greenhouse gases, and are very harmful to the environment.