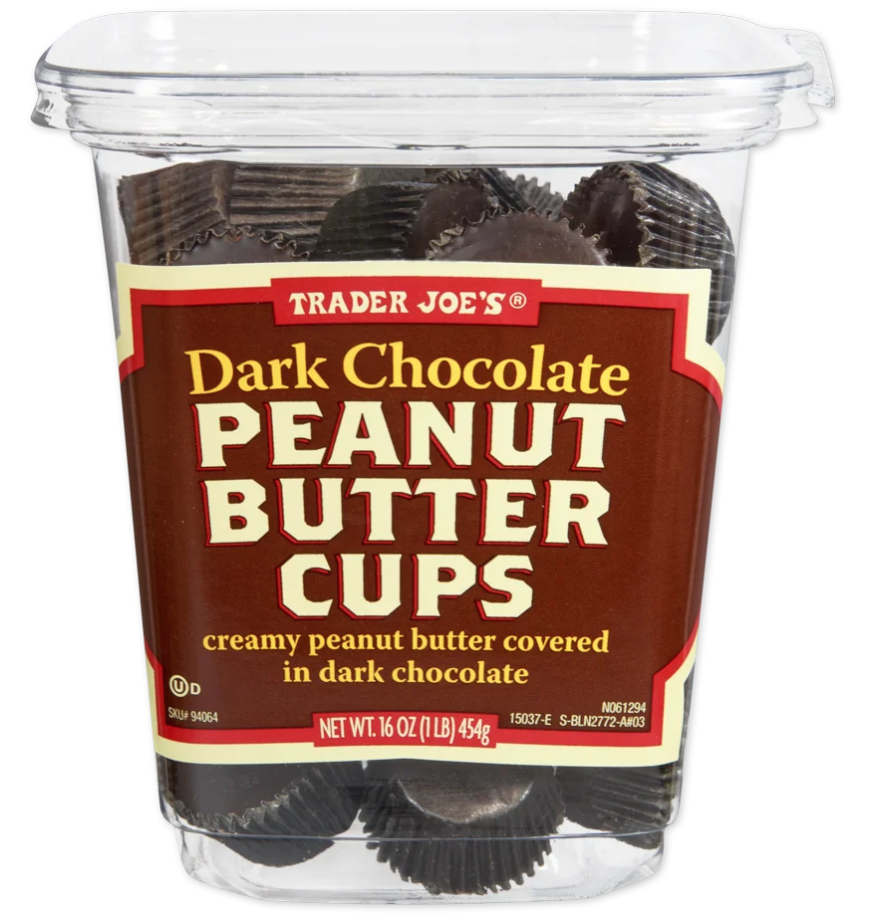 I am almost indescribably disappointed by what I have learned in writing this review about Trader Joe’s, and especially their very popular and, admittedly, very delicious dark chocolate peanut butter cups. Trader Joe’s has a shocking lack of transparency across the board in their company and the questionable ethical practices, problematic history with the EPA, and use of palm oil and non-fair-trade certified cocoa make this product almost entirely unsustainable. The only positives I can see for TJ’s are their good reputation for working conditions, their commitment to minimizing waste and donating unsaleable food to the community, and the fact that they minimize chemicals and synthetic products, so this item only has 7 ingredients. Although it hurts me to say it, I would generally not recommend someone buy this product.

Let’s start with the good things: this product only has seven ingredients (if you count semi sweet chocolate as one). It is also made of one very naturally sustainable product on the market, and some of the least sustainable products. Palm oil and Palm kernel oil are listed as separate ingredients in this product, but both are made similarly and cause massive deforestation usually through the burning of rainforests which releases CO2, destroys habitats and spreads massive amounts of smoke to affect people’s health. Most palm oil trees are grown in Malaysia and Indonesia, where tropical peat forests store more carbon than any other ecosystem in the world; that carbon is released when these forests are burned. Clearing and burning rainforests also displaces indigenous peoples and palm oil mills cause water pollution. Cocoa, which is used to produce the chocolate in this product, is also often unsustainably grown and farmed, and Trader Joe’s chocolate is potentially extremely harmful. The company expresses no acknowledgement or commitment to limiting deforestation, which cocoa production greatly contributes to, or fair trade policies, meaning factory workers and farmers do not have to be treated ethically by Trader Joe’s suppliers. Without these policies, Trader Joe’s aligns with other retailers who, on average, make 44% of profits from cocoa sales, while farmers make only 6.6%. Cocoa farming also often includes child labor, a factor which Trader Joe’s does not acknowledge in regards to their chocolate either. Another ingredient in the peanut butter cups is lactose, which is a byproduct of the dairy industry. I think that statement speaks for itself, but to summarize briefly, this means it is linked to massive GHG production, water supply contamination, land clearing which also impacts biodiversity, topsoil erosion, extremely high water use, and desertification. Soy lecithin and peanut butter, however, are products that are relatively sustainable. Soy lecithin is linked to relatively low water and greenhouse gas production and destruction of habitat or impact on animal life. Although it is impossible to know where Trader Joe’s soybeans are grown, those grown in the U.S. are regarded as generally sustainable. 95% of U.S. soybean farmers use sustainable production practices; in their farming in recent years, they have decreased both energy used in production and GHG emissions by nearly half, found ways to produce more plants in less area, used preservation practices to ensure clean water supplies and minimal runoff, and decreased soil erosion by over half. Peanuts are a naturally sustainable crop as they were originally introduced to widespread farming to help recycle fields through nitrogen fixation. This means that their growth replenishes nutrients in the soil rather than draining them and, as a result, requires the use of less fertilizer both in their own growth and any crop grown in that field directly after peanuts, producing less CO2. Peanuts are a deep rooted crop, so they can reach natural water wells and require less irrigation, and the peanut industry is working to become even more sustainable. They have developed peanuts that increase production without using more land, water, or pesticides, or producing additional GHG’s. The peanut butter cups are all individually wrapped in a paper material and come in a plastic container. From ingredients to packaging, the vast majority of what these peanut butter cups are made of is far from impressive. If Trader Joe’s wants to stay true to it’s branding as a grocery store for people who care about natural high-quality products, they need to do better.

Despite extensive research, I have no understanding of how this product is manufactured, specifically by Trader Joe’s. What I do have an understanding of is that this is common for the company. Reports by other organizations have shown that many of Trader Joe’s products are actually products manufactured by larger companies and given a new Trader Joe’s specific label. Trader Joe’s does not publish anywhere who manufactures their products, and intentionally keeps this information secret to gain customers and keep them loyal to the chain. To me, this feels like an aggressive lack of transparency, and a method designed to convince customers to pay more for the same products. Another factor that brings this rating down is the no-doubt massive emissions Trader Joe’s produces in their distribution process. Because the company appears to be partnering with many different factories and suppliers to make their products, each of these individual factories are likely shipping products to Trader Joe’s roughly 22 warehouses. From these warehouses, products are then once again distributed to 548 individual TJ’s stores. This multi-step shipping process with locations around the country means products are likely traveling hundreds of miles to get to stores, and producing massive emissions along the way. These facts together mean I can give the store no grade above a zero because we know so little about the production process of these peanut butter cups, and what we do know is less than impressive.

Trader Joe’s is an independently owned chain of grocery stores with locations across the United States. They pride themselves on selling primarily their own brand and providing natural products at low prices. However, as I mentioned above, we have all recently learned that that is not the case; this one fact makes me distrust the company in so many ways. What else are they hiding and making airtight contracts to keep as company secrets? In terms of sustainability initiatives, Trader Joe’s has focused almost exclusively on food waste and packaging, although I have to give them credit for what they have done and for the fact that they emphasize the initiatives already completed, rather than publicizing empty goals for the future. About 99.5% of Trader Joe’s products are sold, donated to food recovery partners or composted; this is in comparison to 10% of food in America being wasted at the retail level. Because this level of food waste is so significant in the U.S., I am personally impressed by this fact. They have also removed excess components, increased recycled, recyclable, and sustainably sourced materials, and/or removed non-sustainable materials from the packaging of more than 150 products. Why not all products TJ? Unfortunately, this is where transparent sustainability initiatives end at Trader Joe’s, and for that reason I am fairly disappointed. It is simply not enough for a company to reduce their waste and use a little less plastic and publicize it as a sustainability initiative. They do have a policy against forced labor, prison labor, and “forced or illegal” child labor in their supply chain as well as requiring that any suppliers adhere to all laws and designations, both of the U.S. and whatever other countries they may be located in. I think it’s odd that anyone would add the qualifications of “forced or illegal” to child labor to this list; it would make me far more comfortable if they had banned child labor outright as now I am almost certainly convinced that there is child labor in some of Trader Joe’s supply chains, perhaps their cocoa as I mentioned above. The grocery store chain is generally regarded as one of the best to work at, and a great place to be employed in general, which means they must be supporting their employees appropriately in some ways. They have high hourly wages, offer what are considered good benefits for the position, allow employees flexible scheduling, and generate programs and daily efforts to boost employee morale. It is refreshing to see a retail chain that actually supports it’s employees and treats them relatively well. The company historically violated the Clean Air Act by leaking refrigerants which deplete ozone; although they settled with the DOJ and EPA in this case, they have shown no efforts to minimize this pollution or change processes since. On the whole, although their food waste levels are impressive, and it’s nice that they treat their employees well, it does not do enough to make up for Trader Joe’s sustainability across the board.