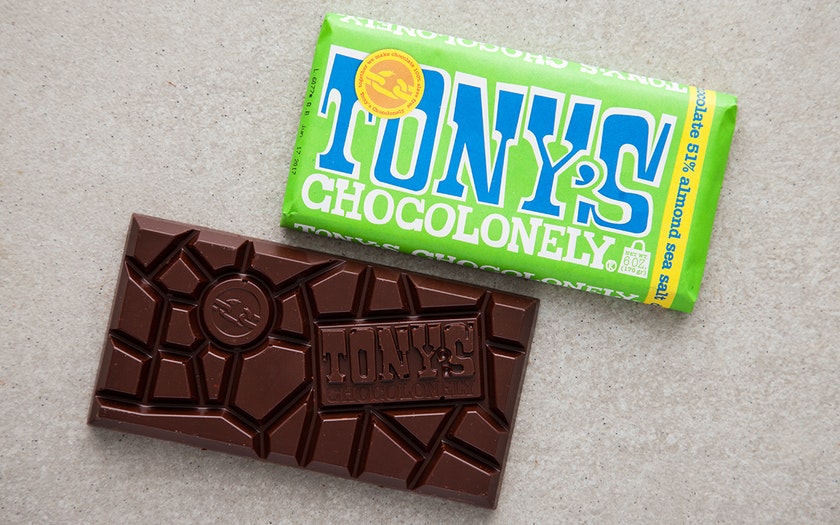 Most of the world's chocolate is consumed in the North, while all of the world's cocoa is produced in the South. The cocoa bean is an important cash crop and a highly globalized commodity for producing and consuming countries. Mainly grown on small-scale cocoa fields by smallholder farmers, the cocoa bean is the dried, fermented, fatty seed of the cacao tree's fruit. Cocoa is the main ingredient of Tony’s Chocolonely Chocolate Bars. Tony’s Chocolonely addresses the bitter truth about chocolate production and cocoa sourcing. It understands that changing one thing isn’t enough to change a system.  All of us, including farmers, chocolate companies, and nature, are stakeholders of the cocoa industry. With the right steps, the cocoa industry can become sustainable and ethical, farmers can achieve a living income, and human rights and environment can be protected.

The cocoa sourced by Tony's is grown and harvested in Ghana and Ivory Coast by farmers before it is turned into chocolate at Tony's factories in Belgium. Cacao trees take a long time to produce fruits compared to other cash crops but also have a much longer life cycle. After planting the seedling, cacao trees, similar to other fruit trees, take 3 to 5 years to produce fruits, and their yield starts to decline 30 years after planting (Cocoa Farming Program). Each tree produces approximately 1,000 cocoa beans a year, which is only enough to make one kilogram of chocolate (Cocoa Farming Program). The primary harvesting season usually starts in October and ends in March; however, the trees give fruit all year round, yet the pods don't ripen simultaneously, so cocoa farmers have to do multiple harvests per year (Cocoa Farming Program). Farmers harvest the fruit pods from cacao trees during the harvesting season by cutting the stalk with a sharp blade.

After drying, the seeds are roasted. As drying and roasting involve lots of heat, bacteria are killed due to high temperatures. The cocoa seeds that are fermented, dried, and roasted become cocoa beans. Finally, the beans are ground and heated to become a chocolate liquor, the main ingredient used to produce chocolate (Processing Cocoa Beans). The chocolate liquor becomes a cocoa mass once it cools down and it will be transported from Africa to Tony's factories in Belgium - where it would be made into delicious chocolate. Tony’s uses recycled packaging for its delicious chocolate bars. The packaging is Forest Stewardship Council-certified Recycled and EU Ecolabel certified paper.

The transparency of the social circumstances under which the beans are produced is crucial for ethical and sustainable cocoa sourcing. Tony’s focuses on the “traceability of cocoa beans from known partner cooperatives and known farmers” to tackle modern slavery and illegal child labor, a significant issue in the cocoa sector. Tony’s has implemented CLMRS, a tool by International Cocoa Initiative (ICI) that traces social data on illegal and child labor at partner cooperatives in Ghana and Ivory Coast to ensure ethical labor practices. Child labor is a serious issue in the cocoa sector, with an estimated 2.1 million children working in cocoa fields in the Ivory Coast and Ghana alone”. Due to high chocolate demand, increased cocoa production is pushing large chocolate producers to keep the cocoa price as low as possible to maximize their profits, which implicitly forces farmers to recruit children to work in cocoa plantations. It is also important to mention that women are hardly included in this sector. In terms of gender equality, only a quarter of the cocoa plantations in West Africa are run by women because they usually have limited access to land rights, credits, and certifications.

Furthermore, paying a higher price for cocoa beans is a crucial step that Tony's has taken to ensure the cocoa sector's sustainability and ethicality. The market concentration of multinationals and how the market decides the cocoa prices are systematic policies that prevent farmers' bargaining power and deprive them of a living income. Additionally, historical data shows that prices have been going down for decades. The current certification premium, which is the market price, does not ensure a living income for farmers. To overcome these issues, Tony's pays an additional premium on top of the certified bean price to make living income achievable for farmers. This premium price is decided according to Tony's calculation model for a living income. Moreover, Tony's buys from and co-develops professional cooperatives to overcome structural poverty. Supporting cooperatives is vital for farmers to achieve bargaining power because it allows them to organize and cooperate, giving them more power to change inequality structurally.

Despite the improvements in labor practices, Tony's still has more action to take for environmental protection in cocoa-producing countries such as Ivory Coast and Ghana. Productivity yield decreases drastically, and farmers are not equipped with the necessary knowledge and tools for sustainable farming. Deforestation and biodiversity loss are critical concerns for the environment as climate change is already heightening the negative impacts of unsustainable farming practices. Historically, cocoa has been cultivated using slash and burn farming in West Africa, which means that forest has to be cut down and burned before planting cocoa crops. When the land becomes infertile, the farmers need to move to new forestland and perform the same slash and burn procedure again, yet the world has limited land. Cocoa farming has directly influenced deforestation in Ivory Coast and Ghana. "In Ivory Coast, the area covered by forest decreased from 16 million hectares – roughly half of the country – in 1960 to less than 2 million hectares in 2005". Unfortunately, we're observing a self-reinforcing system as every part of the system is interconnected. Uncontrolled slash and burn farming's damage is not just on the environment. Due to deforestation, many planters have to rework the same piece of land, and ​replanting the same cocoa farm requires increased input such as extra labor, fertilizers and pesticides. Increased input increases investment costs for cocoa farming - not to mention the high use of agrochemicals are damaging the environment.  Cocoa producers are price takers in the market, so they have no control over the cocoa prices. Higher production cost reduces the profit made by cocoa farmers since they are unable to raise prices. Consequently, "extra labor needed for sedentary cultivation is leading to child trafficking and child labor in cocoa cultivation" . Farmer poverty has a cost: child labor and deforestation are widespread.

Cocoa, the sacred plant of Indigenous people, has become a high-demand crop produced by smallholder farmers who don't earn a living income. In contrast, large chocolate companies are making huge profits by importing cocoa beans from producing countries like Ghana and Ivory Coast. Chocolate is a global $130 billion industry that relies on a key ingredient, cocoa. On the other hand, many cocoa farmers earn less than $1 a day.

Unfortunately, major chocolate companies often source cocoa in unethical and unsustainable conditions. However, Tony's is a Dutch confectionery company founded in 2005 to address this problem and tackle environmental and human rights issues related to cocoa sourcing. The company defines itself as an impact company that makes chocolate, not a chocolate company that wants to make an impact