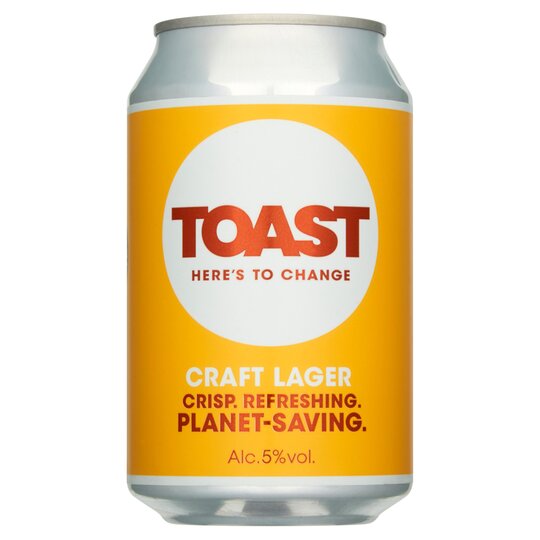 TOAST is a brewing company based in London which is on a mission of ‘planet saving brewing’. To this date, Toast has saved 2,488,076 slices of bread from becoming food waste, and instead has brewed 2,424,240 pints of quality beer. In metaphorical terms, since its establishment in 2016, Toast has saved a mountain of bread three times the height of Mount Everest from rotting away in landfills. In my opinion, they have achieved the impossible by turning something as delicious as bread into something even more delicious...beer!

The enterprise is driven by a vision of a ‘world without waste’, acknowledging that food production is one of the biggest contributors to climate change, but one third of all food is still wasted. The company aligns with the UN Sustainable Development Goal (SDG) 12, to reduce food waste by 50% by 2030. Reducing food waste is one of the fastest, safest, and most equitable ways to limit global warming to 1.5 degrees C (Project Drawdown).

Toast was the first UK brewery to become a B Certified corporation back in 2018. This certification means that Toast must meet the highest standards of verified social and environmental performance, public transparency, and legal accountability. In 2020, Toast’s verified impact score was 111.8 - an improvement of 20 points from 3 years ago - and they are always trying to further their progression.

Overall, it is clear that Toast is an acutely environmentally conscious organisation with strong social and ethical business values. This review is totally self-indulgent, as I already knew of Toast’s virtuous enterprise. However, I have really enjoyed digging deeper into the structure of this company. They are one of the true examples of how a successful enterprise can be run with sustainable and socially enriching values at the heart of the business model. And the most refreshing thing, aside from the beer of course, is that Toast is not resting on their laurels but ever-striving for further improvement.

Toast has an ultimate ‘Big Hairy Audacious Goal’ to save 1 billion slices of bread. And they do not want to corner the market, but instead Toast desires to inspire breweries in the UK and across the world to use surplus bread and other food products in their production. If every UK brewery used just 10% surplus bread in place of barely, UK bread waste could be halved in line with the UN SDG12. This is alongside all the concomitant environmental savings in land, water, and carbon emissions. So, come on brewers of the world, channel your inner Jesus-magician and turn that stale bread into some delicious beer!

The five main ingredients of the beer are malt, bread, hops, yeast and water. These ingredients account for a significant 27.2% of Toast’s carbon footprint. However, Toast uses 30% less malted barley than other beers as it uses surplus fresh bread for fermentation instead. Using less barley means the beer has a less intensive impact on the land, requires less water and produces less carbon emissions. To be precise, this surplus substitute has saved 257,413 litres of water, reclaimed 175,554 metres squared of land and prevented 42 tonnes of CO2 emissions from being released into the atmosphere. The Toast 2020 impact report translates these figures into relatable metrics. For example, the carbon emissions saved is equivalent to 15 million iPhone charges, the land reclaimed is equivalent to 27 football pitches, and the water saved is equivalent to 16 years of daily showering. I think that it is really helpful to equate the hard data into something that the average Jo can understand! Now, of course it can be argued that these numbers are not hugely significant in the grand scheme of things. However, we must remember the importance of smaller scale grassroots actions, especially in the business sector. Also, Toast brewery was only established in 2016, and in light of it being a moderately sized enterprise, I think that this progress is laudable.

Despite this positive progress, it is important to say that Toast could be taking strides to further reduce the carbon impact of the raw ingredients that they source for fermentation. However, I do believe that they are doing as much as they can to make up for their slower progress in this respect.

Toast is also a circular business. The spent grains are given to local farms to be used as nutrient-rich, soil-enriching animal feed. The spent hops are also then composted.

However, Toast does acknowledge that their industrial actions do have an impact on the planet. Their current net carbon footprint is 86 tCO2e, and they are continuously working to measure, reduce and compensate this figure. The use of surplus bread is one measure they have taken to ameliorate their environmental impact. Another is that Toast is partnered with other breweries to use their space and equipment to brew the Toast beer, thus reducing the land footprint. Toast also aims for the fermentation process to be ran off of as much renewable energy as possible, although as they do not have their own brewing premises, this isn't always possible. However, their main partner in 2020 (Hepworth Brewing) used a beer-source heat pump for heating and generates their electricity from solar energy.

Taking all these measures into account, Toast has already reached carbon neutrality. However, they are not stopping there, oh no sir! Their end goal is to achieve Net Zero by 2030, and I believe that they are on track to reach this goal.

Toast refuses to purchase offsets to help them achieve their emission goals, as they believe offsetting runs the risk of allowing corporate ‘business as usual’ to continue unchecked. Instead, they work with Soil Heroes to invest in regenerative UK farms. This investment aims to improve the health of UK soil, which will have a cascade of benefits from improving crop (food) production and increasing biodiversity, to sequestering more carbon and retaining more water.

Another cool scheme ran by the brewery is the Rise Up series, in which they partnered with other food and beverage B Corp companies to incorporate the waste products from their respective production chains into a new range of beers. Other such companies included Divine Chocolate, Odd Box (vegetables), Rebel Kitchen (vegan milks), and Cafe Direct (coffee).

On the packaging front, the beer is packaged either in glass bottles or aluminium cans, both of which can be easily recycled, or in reusable steel kegs. However, Toast acknowledges that the processing of materials like virgin aluminium is energy intensive and that the carbon footprint of the packaging domain does partly depend on the actions of the individual consumer. They do however use fully recycled and recyclable FSC certified cardboard for packing, and in 2020 they removed single-use plastics from all their packaging.

A crucial feature of the Toast business model is that it is a Social Enterprise. This means that all their distributable profits are given to charity, as opposed to shareholders, which so far has generated £62,754 in charitable donations. Also, to combat the food insecurity of UK citizens during the pandemic, for every Toast beer bought or online brewing masterclass attended, a meal was donated to someone in need via the Food for All trust. This totalled an amazing 46,611 meals donated to people living in food poverty during COVID, earning Toast the Footprint (sustainability awards) Covid-19 Contribution 2020 Award. This reflects the brewery’s commitment to using profits to create positive social change rather than further fill the bulging pockets of the board of directors. Toast is like the Robin Hood of food waste brewing and I for one love it!

Furthermore, all shareholders of Toast must reinvest any net capital gains earned back into business with an environmental mission, in line with the Equity for Good scheme.

The Toast team is integral to the business and the company was voted as the #7 top employer by Escape 100 in 2021. The team members are all paid above the London Living Wage and are all shareholders of the business via the Equity for Good scheme aforementioned. They are also required to complete 2 annual days of paid volunteering, which so far has equated to 883 hours.The Toast team, despite being fairly small, is a diverse one with 50% of the staff body identifying as female and 25% being from underrepresented communities.

To note, the brewery doesn't just consist of its employees but aims to reach out to the wider public and engage them in conversations about brewing in a way that is environmentally-responsible. So far, there have been 82,747 downloads of the Toast home-brew content and 519 news articles written about the brewery. This is helping to achieve the company's aim of 'nudging positive action for the planet'. The brewery also aims to build a brewing movement across the world that helps other breweries to use surplus bread in their production process. In this vain, Toast open sources its recipes to inspire home-brewers to start up community-based brewing initiatives. Toast has taken these measures as the company wants to inspire environmentally friendly brewing across the world without incurring a huge carbon footprint. In line with this dream, Toast does not export any beer and sells solely within the UK, as they feel that they can't justify shipping heavy liquids internationally. Furthermore, Toast urges its consumers to join in on the pressure and write to their MP (UK equivalent of Member of Congress) about 'fixing our broken food system' and including food decisions in environmental policy decisions.