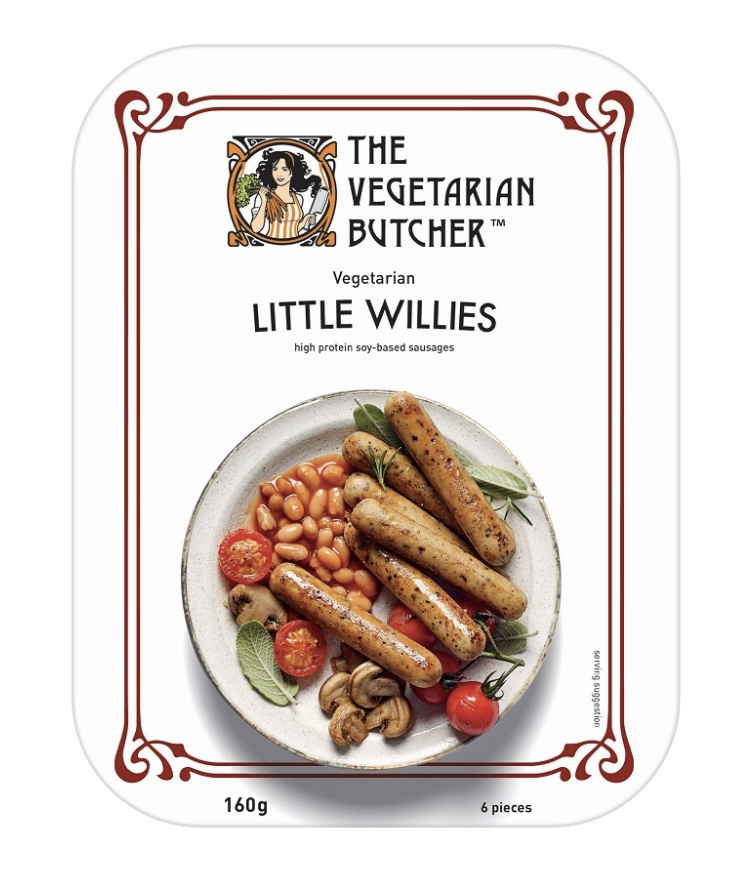 The Vegetarian Butcher can be praised for its desire to shift diets away from animals to plant-based alternatives. One can also appreciate their attempt to do by attracting meat lovers with their fact-simile products. More work needs to be done to ensure that animals are completely removed from their supply chain, and more information needs to be given on their production practices to improve transparency and allow for accountability, two key sustainability principles. As consumers flock to the Vegetarian Butcher, it is important to keep calling for greater innovation and sustainability.

The Vegetarian Butcher’s Little Willies are mostly made using soy protein. On their website, they state that the soy they use comes from Europe, South America outside the Amazon, the Midwest of the US, Canada and parts of Asia. They state that the cultivation of soy is carefully monitored, but there is no mention of whether the farms use sustainable agriculture practices. There is also no information on what actions they take to mitigate or minimise emissions from transporting the soy for processing to the Netherlands.

The Little Willies also contain free range egg whites, making the product vegetarian, rather than vegan. The website does claim that they use eggs from free-range hens, which implies their commitment to animal welfare. The use of eggs in certain products is to provide the necessary structure to ensure that their vegetarian sausages mimic meat sausages to encourage meat lovers to switch to a plant-based diet. This is a trade-off that they have accepted and are currently working on an egg-replacer. Neither of these ingredients seem to have certifications.

Their packaging, however, raises some concerns. Only the outer sleeve is suitable for recycling. The tray containing the sausages and the film covering them are not, suggesting the continued use of single use plastic. I was unable to find any information on how they plan to address this issue. As the company grows and expands, if not addressed, this could become a significant waste and pollution problem.

Aside from stating that they import their soy from all over the world, I was unable to find any additional information on their production processes. I did discover that in 2021 Unilever, the parent company which owns The Vegetarian Butcher, partnered with Enough, a food-tech company, to produce zero-waste protein through their unique zero-waste fermentation process. Natural fungi are fed renewable feedstock, such as wheat and corn, to produce the ABUNDA myroprotein. Although this demonstrates an excellent step towards sustainable production, there is no mention of this on the company’s website or on the product description.

Additionally, there is no information on how their factories and stores operate, in terms of energy efficiency, renewable energy sources, recycling, repurposing etc. Their timeline does state that in 2015 they built a second new factory, but does not comment on whether they used sustainable materials.

Encouraging is that they have received several awards for their products. These include several PETA awards, the Best Vegan Product award, the Vegan Award, the Corporate 4 Animals 2016 award from the Eurogroup for Animals and the VeggieBite award. In 2020, they also campaigned to encourage the EU to strove for climate neutrality and argued that the subsidies destined for meat production should instead be used on products like their Lucky Chicken Chicken Pieces.

The Vegetarian Butcher is a Dutch company owned and founded by Jaap Koteweg. He sought to deliver meat alternatives following the motto “Sacrifice Nothing” and based on the principles of participating in a food revolution, with high quality meat and removing animal from the food supply chain. As mentioned above, this has not happened yet. It has received several commendations and has grown significantly in recent years. Their ultimate aim is to become the largest meat producer in the world, which could suggest a greater emphasis on cost effectiveness rather than sustainability.

The company is a subsidiary of Unilever, as is part of the latter’s portfolio of vegan food, alongside Magnum and Ben & Jerry’s. The Vegetarian Butcher has also formed a partnership with global fast food chain Burger King to supply vegan protein in its efforts to reduce its stores carbon emissions. In the UK, Burger King now offers a Plant-Based Whopper and a Vegan Royale. This supports its claims of participating a food revolution and highlights its commitment to animal welfare.

I do have a slight problem with their use of palm oil. Although the Little Willies do not contain it, other products, such as the Great Escalope’s, do. In their website they claim that their palm oil is sustainably sourced and certified by the RSPO. However, the RSPO has failed to achieve environmental and social sustainability. According to a study by the University of Queensland and the ARC Centre of Excellence for Environmental Decisions, their plantations show no evidence of orangutan protection, indicating a lack of biodiversity conservation, fire hotpots and the exposure of peatlands. This is important because Indonesia and Malaysia, where most palm oil originates, have considerable forest cover and are home to many species of trees and animals. Certain products also contain milk, meaning that they partake in agricultural emissions, in terms of the tress cut down to create fields to house the cattle and to grow cattle feed.