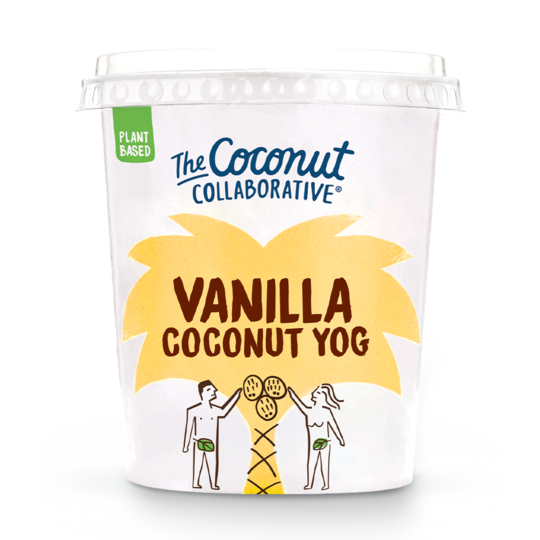 The Coconut Collaborative’s Vanilla Coconut Yog is a creamy, dairy-free yoghurt alternative perfect on top of pancakes or with granola in the mornings. Retailing at £2.00-£2.50 in UK supermarkets, it is a tastier, healthier and more environmentally-friendly option compared to dairy yoghurt.

The company was founded in 2014 by James Averdieck – its current manager – who also founded and then sold the dairy-based dessert company Gü. The Coconut Collaborative recently secured $7 million in an investment funding round from PowerPlant Partners, hoping to expand further into the US market. PowerPlant Partners have also invested in the likes of Beyond Meat, with their goal being to invest in those companies they think can solve some of today’s “greatest health and environmental problems”. Known as just The Collaborative in the US, they expect to move beyond coconut as their main ingredient in the future.

But is this vanilla yoghurt alternative really better for the environment and your body just by virtue of being dairy-free? Or is there more to it? The Coconut Collaborative makes a clear and concerted effort to ensure their suppliers are ethically sound, particularly in regards to its coconut suppliers. They could benefit, however, from some more transparency concerning their production line. As a small and young company, I hope to see The Coconut Collaborative in the UK and The Collaborative in the US making strides to achieve full transparency and circularity where possible in their products in the years to come.

The Coconut Collaborative’s yoghurt is made with real vanilla and coconutwith no added sugars, is free of cholesterol, and is a source of magnesium and potassium. They boast their product is palm oil free, gluten free and made with live cultures. In their website FAQ they highlight how their products are not fortified with added calcium or vitamins, but they are working on this for future products. As such, this yoghurt seems to be a healthy alternative to similar dairy options on the market.

All their products are free of GMO ingredients, with suppliers being GMO-free certified and their own products being Non-GMO Project audited and accredited. However, it is worth investigating whether this certification is worthwhile. The Non-GMO Project is a non-profit organization which aims to educate consumers and provide support to brands to build GMO-free supply chains and consumption models. The Non-GMO Project has been criticised for spreading fear and misinformation regarding what genetic modification of produce actually is, hence benefitting by leading consumers to buy the products which use their GMO-free certification because they think it is “safer” or “healthier”. The Non-GMO Project has moreover been criticised for labelling products as “GMO-free” when there is nothing in them that could possibly be genetically modified, and for mislabelling those which do contain GMO-derived products. According to one source, this non-profit claims revenues of nearly $1.8 million USD yearly. There is nothing inherently wrong with certain levels of genetic modification in agriculture, and such techniques (such as cross-breeding different plants or choosing the most favourable traits) have been used by farmers for millennia. As such, we can be a little sceptical as to this certification, and instead consider the other ways in which The Coconut Collaborative are attempting to make their product both healthier and better for the environment.

Coconut farming has large, detrimental effects on the environment, particularly when it is farmed as part of a monoculture. It can lead to soil degradation, loss of biodiversity, and a turn to increased use of chemical fertilisers which only exaggerates such issues. However, The Coconut Collaborative source their coconuts from suppliers with a “strong Ethical and Welfare Policy” and they filter suppliers using the Sedex Members Ethical Trade Audit (SMETA) to assess them. This ensures that all the suppliers they work with maintain high standards of labour, health and safety, environment and business ethics. Their coconuts are sourced from both Indonesia and the Philippines and they insist they keep a “close relationship” with their farmers to ensure they are harvesting the coconuts ethically and not using monkey labour, for example. See the “Who Makes It” section below for more on their particular partnership with Indonesian and Filipino farmers.

As this yoghurt is vanilla flavoured, we also must consider where the company sources their vanilla beans. We can assume that they also use the SMETA to assess their vanilla suppliers, which is vital considering the vanilla bean industry has connections to child labour and environmental harm. The demand for vanilla beans is continually soaring, withthe demand far outweighing their availability. This has lead to deforestation and high levels of violence from gangs who try to steal the crops, particularly in Madagascar. The money involved in the vanilla market has also led to corruption among the government, as some Madagascans have highlighted, curtailing the opportunities for Madagascar democracy. Further research on the efficacy and depth of SMETA would be necessary to ascertain the extent to which suppliers are vetted and thus ethically sound.

In regards to packaging, the company highlights that it is made out of widely recyclable material polypropylene. However, some critics point out that in spite of being one of the most widely-used “recyclable” plastics, only 1% of polypropylene is recycled, with the rest going straight to landfill. This is largely because while polypropylene is recyclable, the demand for it in its recycled form is much lower than the demand for it in its pure, pre-recycled form. It is thus more cost-effective to have it sent to landfill than it is to provide the correct machinery necessary to its recycling. While this is potentially a criticism directed more towards recycling companies or government agencies, The Coconut Collaborative could benefit environmentally from looking into even more sustainable alternatives.

We also must consider not just the packaging of The Coconut Collaborative products once they hit the supermarket shelves, but also whether they are making an effort to make the materials used in transporting their coconuts across the globe more environmentally-friendly or circular.

As such, The Coconut Collaborative gets a high rating for the efforts they are making to provide a healthy yet affordable yoghurt, to source their ingredients ethically using SMETA, and the transparency they provide on their website in regards to this. However, they could benefit from more transparency or clear goals on how they aim to reduce waste from their products and reduce the negative environmental impact caused by plastic.

Like dairy yoghurt, this coconut-based “Yog” is made in a similar way, fermented with vegan live cultures. There is not much information on their website regarding the processes involved in making (dairy-free) yoghurt and the environmental impact this has. They claim they are currently calculating their overall carbon footprint and that we should check back in to find that, but for now we can turn to general yoghurt production to assess how environmentally friendly the process is.

To make yoghurt, the milk (in this case coconut) needs to be separated into skim and ream, and excess liquid may be evaporated off. High temperatures are then used to kill off harmful bacteria and to thicken the product while the live cultures are added to achieve the yoghurt-like taste. The yoghurt is then fermented and additional sweeteners or flavours (such as vanilla) can be added. The necessity for extremely high temperatures as well as refrigeration means a lot of energy is needed to power this manufacturing process. The Coconut Collaborative does not provide information on their manufacturing process, factories or commitment to reducing energy use or switching to more renewable sources. As they are still a small company – unlike big league yoghurt players such as Danone – we can probably forgive them for this amongst their more general transparency and commitment to environmentalism. However, as they grow as a company and expand their product base, they should aim to be more transparent and sustainable in this sphere.

The Coconut Collaborative does not make any comment on their website regarding the impact of shipping coconuts from Indonesia or the Philippines on emissions and the environment. While their work maintaining sustainable environmental and working conditions in these places is commendable, it is also worth considering their overall impact on climate change. The Coconut Collaborative could look into offsetting measures (considering it is difficult to grow coconuts closer to home) or at the very least provide some transparency as to their awareness of this issue.

Finally, The Coconut Collaborative highlights their partnership with various food charities across the UK. To reduce food waste, the company send their excess stock of yoghurts and desserts to these charities. This is a good initiative which has both positive environmental and social impacts.

The Coconut Collaborative could benefit from more transparency regarding how and where their yoghurt is actually made, and what they are doing to promote safe working conditions and sustainability in their yoghurt-making process. However, providing a dairy-free alternative which consumers may choose over dairy products does help to mitigate climate change due to the larger negative effects caused by dairy farming.

More than just ensuring their coconuts are ethically sourced, The Coconut Collaborative has partnered with Pur Projet to protect the sustainability of coconut trees and their ecosystems. They help to regenerate the ecosystems they grow their coconuts on, and moreover, help to inform the local communities about environmental agroforestry. By purchasing coconut seedlings, The Coconut Collaborative alongside Pur Projet helps farmers to grow the fruit in a sustainable manner alongside other plants such as coffee and guava – avoiding some of the problems associated with monoculture farming. As the farmers have full ownership over these crops, they are incentivised to keep on farming in a sustainable way, taking care of the land.We can thus be satisfied that in regards to their main coconut suppliers, The Coconut Collaborative are making a concerted effort to maintain the farmers’ wellbeing and the wellbeing of their environment.

As they are a small and relatively new company, there is not much information online about their workers’ experience closer to home in the UK. One interview with the CEO suggests Covid-19 led the company to reducing their expenses by 37.5%. Part of this number was achieved through reducing rent and a hiring freeze, however we cannot rule out that they did not also sack part of the staff during this crisis (although this is speculative). According to their LinkedIn, 70% of their UK team is made up of women in a variety of roles, including directive and executive roles, which is great to hear. There is no mention online of any commitment the company has to diversity in their staff, but this does not necessarily indicate they are un-diverse. The jury is still out on this one. Nevertheless, the commitment of the company to working with Pur Projet and their evidenced support of gender equality lends them a high rating in this section.