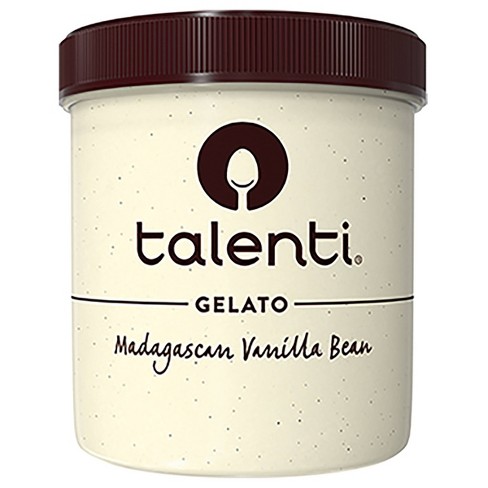 Without fail, I will always have at least two or three jars of Talenti gelato in my freezer, and more than thirty of the plastic containers in my tupperware cabinet. I love eating this gelato– especially their Vanilla Peanut Butter Swirl flavor, it’s absolute perfection– but I wondered if Talenti was doing anything to be more sustainable, since all those plastic containers are a little eyebrow-raising. However, upon completing this review, I was very pleasantly surprised to learn that Talenti is much better in sustainability than I realized. Perfect for sharing or eating by yourself (I won’t judge!), Talenti gelato comes in a huge variety of delicious and innovative flavors. Available in Classic, Layer (with mix-in toppings), Pairings (with two flavors included), Organic, and Sorbetto (fruit sorbet) versions, Talenti prides itself on offering a flavor that you are sure to enjoy. Talenti also provides egg-free, gluten-free, and dairy-free options to cater to the ingredient and allergy sensitive population. As a company based in the United States, Talenti is actually more sustainable than you’d think. They’re aware of sustainable ingredient sourcing, and take care to clarify how they make their products. Whether it’s used to top warm chocolate cake, get over a breakup, or enjoyed just because it’s a Tuesday– maybe Talenti is the brand to try!

Talenti isn’t really ice cream, it’s actually gelato, which is an Italian-based frozen dairy dessert that doesn’t use as much cream as typical ice cream. Because the production process is entirely different, gelato is less icy, more smooth and creamy, and more intensely flavorful than ice cream. The specific ingredients vary for each flavor, but for the most part Talenti’s basic gelato consists of a sweet, slow-cooked combination of fresh whole milk, fresh cream, pure cane sugar, and flavoring ingredients. Talenti does not use GMO ingredients or high fructose corn syrup, claiming that they use “only the best ingredients, whether they’re sourced around the corner or around the world,” and this seems to be true. The gelato ingredients are FDA-defined as containing no allergens and unnatural ingredients, though some exact ingredients (like fruit juices and essential oils) are considered to be the proprietary information of the vendor-partners. They provide an ingredient map, showing that they source their cocoa from West Africa, Belgian chocolate from Belgium, coconut from the Philippines, hibiscus powder from Vietnam, and Pistachios from California, to name a few. Their milk and cream are sourced from humane farms that do not use added hormones and antibiotics, and all their ingredients are pasteurized. Talenti does occasionally use palm oil, which is an unsustainably-farmed ingredient, but their parent company, Unilever, is open and informative about which palm oil supplier they rely on. They began using 100% physically certified sustainable palm oil in 2019 to eliminate deforestation, and detailed the policy on their website. The use of dextrose in their products is explained and justified– They are very transparent about where they get their ingredients from, and even change their products to follow this transparency. For example, their classic vanilla gelato used to be named “Tahitian Vanilla Bean.” After changing the source of their vanilla beans to Madagascar, their fan-favorite gelato was then christened “Madagascan Vanilla Bean.” They began sourcing pistachios from the Pacific Coast instead of Sicily in 2020, and their pistachio flavored gelato name reflected this change. Talenti states that their cocoa (which is notorious for having unsustainable farming methods), is sustainably sourced, and their coffee is fair-trade from Brazil and Colombia. This shows that Talenti is transparent about their ingredient sources and also supports sustainable production and farming.

Talenti’s gelato is made differently from ice cream in that the ratio of milk to cream is higher than that of ice cream. Their gelato is made with a pretty simple process– just stir fresh milk, cream, sugar, and flavoring ingredients together over heat, and then each batch is cooked for 45 minutes to allow flavors to develop and intensify. The gelato is then cooled, churned, and then packaged into their iconic plastic pint containers and shipped to various stores and groceries. While these pints require quite a lot of plastic to make and inherently cause quite a lot of plastic to end up in landfills, Talenti is aware of this and actually encourages its consumers to reuse the containers (which I do!). Though the jars are recyclable as well, the plastic they use is BPA-free and completely reusable! They have a whole Instagram hashtag dedicated to allowing their customers to show how they reuse their jars. This is not their only initiative to reduce plastic waste, however. Talenti used to have plastic seals on their gelato pints (underneath the lid), and since 2019 they’ve omitted this seal to reduce plastic use, which is part of an initiative to follow Unilever’s Sustainability Plan.

Parent company Unilever purchased Talenti, an American gelato and sorbetto company in 2014. Talenti itself is dedicated to ingredient transparency and recycling, but how well does Unilever commit itself to the same goals? Luckily, Unilever is a sustainability analyst’s dream. They have a whole webpage dedicated to their goals about sustainability, climate action, employee wellbeing, and positive nutrition. They’re committed to using sustainably sourced ingredients in order to minimize their carbon footprint and waste, and to support biodiversity regeneration. They’ve announced that they’re becoming a deforestation-free supply chain by 2023, meaning that their paper, cocoa, coffee, etc. will come from places that are deforestation and conversion free. Their Climate and Nature Fund allows them to promote landscape restoration, reforestation, and water preservation, making them a highly respectable company for keeping such issues in mind. Unilever is also aware of poverty and minimum wage, ensuring that their employees earn a livable wage, promoting diversity and inclusion and opportunities for everyone.