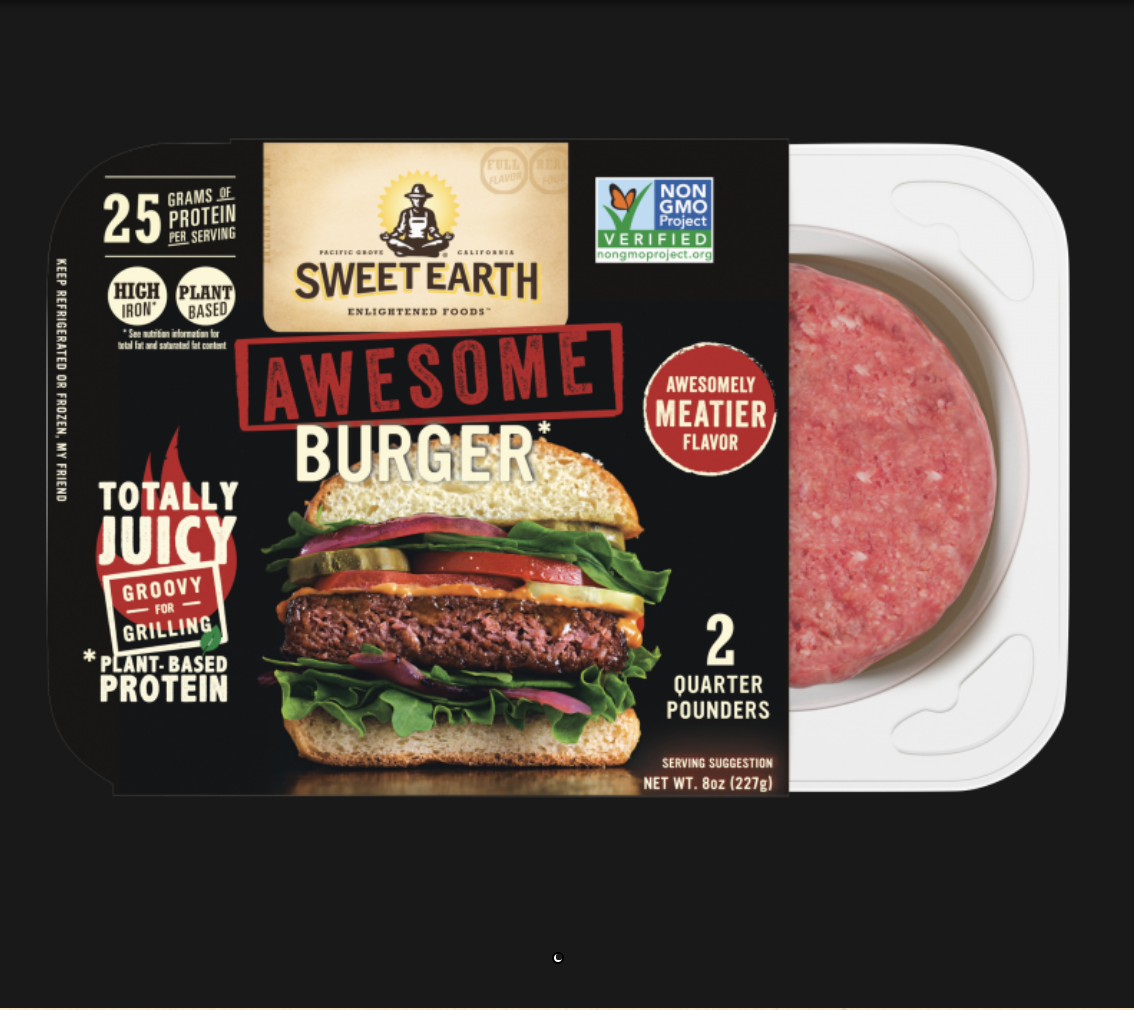 The Awesome Burger and other Sweet Earth products are indeed Nestlé’s calculated response to the Impossible Burger and Beyond Meat. The pea protein and fruit and vegetable concentrate for coloring makes the Awesome Burger appealing to those looking for a meat alternative that has both the look and the taste, but I wanted to see more about the production. It’s good that they added the ingredients section on the product page, but that’s something that anyone who picks up the product and looks at that section can see. I want them to add more details about who is growing the peas, where they’re growing the peas, and then where they are being transported. Next up, Sweet Earth says they’ve saved almost 300 million miles of transport, but don’t provide any evidence or reasoning as to how they are able to do that. They don’t show anything on how the Awesome Burger is actually made from the ingredients and where it is made; seems to me that would be the ideal situation to plug their hefty transportation statistics. Though it launched around two years ago, I had never heard of it despite knowing about its other two competitors. I always welcome a new meat-alternative product and I’m glad to see Nestlé throwing their hat in the ring to hopefully make vegetarian and vegan options more mainstream. I was impressed by Nestlé’s transparency concerning their overall sustainability and company practices and goals. I went into this review expecting very little from Nestlé because it is such a large corporation, which to me is completely counter-intuitive and illogical. We tend to expect the most from small, indie brands, and the least from massive corporations. We have to stop that. It allows big corporations like Nestlé to do the bare minimum and be applauded, which isn’t the type of judgment we should be applying. That being said, Nestlé and Sweet Earth are making real moves toward sustainability and it’s something that I can genuinely applaud because I’m happy with their actions. I recommend trying this product out if you’re looking for meat alternatives to experiment with. When we look at progress in any area, we can praise actions taken, but it becomes a problem when we as a society start settling. So, I am here to say a good job to Nestlé for what they’ve accomplished so far, but we are not settling.

Upon first glance at the product page on the Sweet Earth branch of the Goodnes site, consumers are shown four icons that state the Awesome Burger is plant-based, vegan, non-GMO project verified, and has 25g of protein. To most people, this would be enough information to know whether or not they want to purchase the product. However, this is really the bare minimum and I’m surprised that a company that boasts it’s plant-based and sustainable product aren’t filling up their pages with tons of information about every single ingredient and how it’s grown, harvested, and then turned into the final product. They do have a nutrition tab that shows the breakdown of calories, saturated fats, sodium levels, and the ingredients. When you look at the ingredients, you see oils, fruit and vegetable juices, vinegar, salts, and a few other things. Sure, this is transparent in that they’re showing you literal ingredients, but I’m confused as to why they advertise plant-based protein and then have no information about the specific plants they use or how they create the actual burger. Upon further research off of the Sweet Earth site, I found that the Awesome Burger is made of US-sourced yellow pea protein. Looking back at the ingredients page, textured pea protein is indeed the second listed item after water. So, it’s not as if they’re hiding anything, but they’re also not actively showing off the fact that they use pea protein instead of traditional meat. I had to look beyond the product page to find the co-founder, Kelly Swette’s, thoughts on the Awesome Burger. She explains peas are very sustainable because they’re a nitrogen fixer that replenishes soil nutrients and are grown in cooler climates. This is information that I wish we saw on the product page because I think these details are valuable to consumers, and if they’re not, companies adding them to product pages could hint to consumers that they should start caring about these things.

Though many conflate the ideas of vegan or plant-based products with being healthy, it’s important for us to be reminded that each is not mutually exclusive. That is unfortunately the case when considering the Awesome Burger. Though it has high levels of protein and fiber, dietitian Scott Keatley states that it contains far more sodium than traditional beef burgers! He also states the Awesome Burger is lacking in vitamin B12 and iron, which are both essential for the body’s red blood cells. Nutritionist Karen Ansel similarly states that the Awesome Burger has some hidden pitfalls which include that it’s very highly processed due to most of its fat being derived from coconut oil which is filled with saturated fat and sodium. Ansel also states that although the burger is advertised as plant-based–and it is–the ingredients are “broken down, pulverized, and mixed together [and] may not deliver the same health benefits” as would eating the plant ingredients separately. Unfortunately, there is no information on the Sweet Earth site that describes how the Awesome Burger is made. The only thing stated in their FAQ is that products are made on shared equipment, something that may turn vegans away from the product since Sweet Earth does still use dairy products and eggs in other products. I’m shocked at the utter absence of any sort of manufacturing or processing information and it prevents potentially positive comparisons to the production of traditional meat products.

Sweet Earth Foods is owned by Nestlé, the world’s largest food company in 2020, a title it’s held for more than a decade aside from a brief dethroning in 2018. Nestlé has a section of their site that showcases their 36 commitments that focus on three areas: individuals and families, communities, and the planet. They then have subheadings like offering tastier healthier choices and then even more specific goals such as launching more food and beverages that are nutritious for mothers-to-be and infants. The way they measure their success in each of these areas is quite robust, with labels stating ‘achieved’, ‘partially achieved’, or ‘extended.’ Nestlé goes further by linking pages for each goal that tracks their progress and provides numbers like ’1210 nutritious products brought to market in 2020.’ They also provide examples of specific products like plant-based beverages and why those are better alternatives for mothers-to-be and infants. As for their ‘Planet’ section, Nestlé has 10 goals including raising awareness on water conservation and providing climate change leadership. Another one is reducing food loss and waste which they have achieved by reducing crop mold on Nigerian maize farms and working with Kenyan coffee growers to turn their surplus into marketable products. I’m impressed by how thoroughly Nestlé is going through its ranks to implement sustainable practices at every level, which may be a result of the child-slavery lawsuit brought against them. Furthermore, they’re actually taking meaningful action that has had real impacts not just on their employees’ lives, but also the planet. Of their 10 ‘Planet’ goals, they have achieved eight and extended two. Those extensions are to put water management action plans in place; they’ve only done this at 3 supply chains in high-priority areas. However, they don’t say how many supply chains in high-priority areas there are, so this could be more or less urgent than they’re letting on. The second one is also water-related and is working to achieve water efficiency and sustainability across their operations. They reduced 32% reduction in direct water withdrawals at the end of 2020 and are working to replenish 100% of the water that Nestlé water has withdrawn by 2025.

Overall, their transparency in labeling their progress for these substantial goals shows they are committed to ensuring their company remains a leader in the food sector. As for Sweet Earth foods itself, their site contains a tab labeled ‘Eco-Clock’ where they have an interactive scrolling graph that shows the reduced impact they’ve had on the planet in comparison to traditional meat production. Sweet Earth is a plant-based vegetarian company that has made 13,109,792 pounds of protein and avoided emitting 85,475,850,533 CO2 EQ grams. They also list the number of pigs (91,768), chickens (3,015,252), and cows (26,219) they’ve saved. Finally, they end their diagram showing that they’ve saved 296,281,379 miles that they would’ve otherwise driven, and conserved 89,802,104 gallons of water. Their statement is that they are ‘Conscious By Choice,’ and I have to say, their impressive metrics lead me to agree with them.