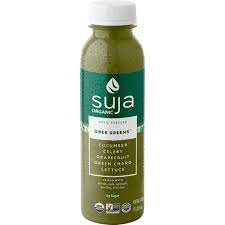 As a dedicated organic juice, Uber greens is absolutely delicious, and Suja Organic has been using quality ingredients without adding sugar to the list as stated on its website. I like this drink. I first want to say that it is not because of the taste. The taste is an acquired taste and definitely not something I would say is good. I personally have to chug this to get it down. However, the benefits it’s given me are amazing. I have felt better drinking this every day than I have in a long time. If you are looking for a tasty drink to sip on, this is not it. But if you are looking for something to help your overall health, detox cleanse, reduce bloating, and weight loss, this is a good drink for you. For me, the dominant tastes are cucumber and celery, which I love. The rest of the blend is also perfect, fresh-tasting. I highly recommend Uber Greens for people who enjoy healthy drinks. It's a bit pricey for me at $3.99, but others might find it affordable. Suja Organic is producing other cold pressured types of juices as well, but my review focused on Uber Greens cold pressured juice only.

Overall, I am so concerned about the labeling on the plastic bottle of this product. If you look clearly at the bottle of this product, you will notice that it has been labeled 5-gram sugar. However, on the website of Suja Organic, the product detail description stated that Suja Organic Uber Greens is USDA certified organic, Non-GMO project verified, cold pressured, kosher, dairy-free, soy-free, gluten-free, and contains no added sugars or sweeteners. For me, I would like to see  Suja Organic clarify and specify what type of sugar is in its product.

At a glance, Uber Greens is a Non-GMO project verified by the Non-GMO Project, cold-pressured, kosher, dairy-free, soy-free, gluten-free, vegan, and contains no added sugars or sweeteners. This brand of organic cold-pressed juice is sold in approximately 10,000 outlets, with exclusive products offered at such retailers as Target, Kroger, and Costco. Currently, the company manufactures more than 50 varieties. As Suja Organic is using a high-pressure process in its production chain, this process has some complications. I researched how effective and sustainable the high-pressure process could be, and I discovered that the high-pressure process has a shorter shelf life than traditional pasteurization.

So, I would like to advise Suja Organic to make its stock-keeping units weekly in order to maximize the shelf life of its products that consumers and retailers might get. Concerning sourcing, Suja Organic sources more than 800,000 lbs of its organic produce weekly from California and Hawaii growers and processes them into plastic bottles. Suja Organic does not have an organized co-packer or contracting manufacturing network. However, I hope to find that Suja mentioned its growers in California and Hawaii, but all in vain. Suja Organic did not mention who their growers in California, and Hawaii are, and how the product is being grown. Suja Organic did not also clarify what produce is sourced from California, and what produce is sourced from Hawaii.

I would like to see Suja Organic improve its report by stating the growers it deals with, the kind of contracts, organic farming practices, and any sort of environmental social governance it follows. Comparing Suja Organic and Campbell Soup Co., Suja Organic is facing growing competition from Campbell Soup Co. Campbell Soup firm has a premium juice brand, which is also entering the category with its new organic cold-pressed juice line. I am a bit proud of the expansion business strategy that Suja Organic is aiming to achieve. Suja Organic went into strategizing its ambition to focus on primary retailers and increase shelf space with those retailers. Additionally, Suja Organic also aims to democratize cold-pressed organic juice and make it available to the masses at an acceptable price point, which plays a great gesture in bringing a low-income class of people to try organic products. Suja seems to have a plan for implementing this, which they highlight in their report, but they do not disclose details. However, I would Suja Organic does not utter approximately how much its affordable organic products cost.

I became so curious to know how Suja Organic has been sourcing more than 800,000 Ibs organic products weekly from California, and Hawaii, and what would it be like year-round? I did some quality research about Suja’s sourcing strategy to find out that, in the winter season, Suja Organic gets produce about three hours from San Diego (Imperial County). In Spring and Summer, it gets produced from Bakersfield (California) while in the fall, it gets from San Diego. I failed to find concrete information about which season Suja Organic sources produce from Hawaii. Although no information has been found about Suja’s growers in California and Hawaii, this has made me more skeptical about Suja’s standpoint of transparency, and accuracy.

Suja Organic Uber Greens ingredients are washed, sanitized, and entered a press for juice extraction. The juice is then held in chilled tanks until the batch is complete, at which point, the filler queues up. The filling process normally occurs on one of the three fillers depending on the bottle size. So, once the bottles are filled, they move to high-pressure processing. The high-pressure process is also known as cold pressure. It is a method of preserving packaged food products using extremely high pressure instead of high heat. Hydraulic fluid (normally water) is placed in a chamber and pressurized with a pump. This pressure is transmitted through the package into the food itself. This process extends shelf life without preservatives and helps maintain the nutrients in organic cold-pressured juices and functional beverages.

The filled bottles are loaded into one of the high-pressured processing machines and subject to pressures in excess of 80,000 pounds. High-pressure processing uses pressure instead of heat to pasteurize the juice. This allows the nutrients in the juice to remain uncompromised and preserves the juice’s taste. Once pressure is reached at the endpoint, the cycle completes, and the plastic bottles are conveyed into packing. During the packaging process, which happens in the packaging room, the plastic bottles receive shrink or labels and are packaged in shrink bundles or display cases, before being palletized and moved to the finished goods cooler for warehousing. What I like about the HHP technology is that it helps Suja avoid the use of all preservatives, additives, and natural flavors.

I am impressed by the way Suja manages its waste byproducts in its facilities. It sends a majority of its pulp to local farmers for cattle feed. Suja facilities are designed with LED lighting and proximity sensors for automated operation, a high-efficiency refrigerator panel to keep all cold air inside, and converted much of the product sourcing to reusable bins to reduce corrugate waste. Soju has demonstrated the best approach by managing its energy through LED lighting. I would rate Suja based on this energy efficiency management. In 2018, Suja eliminated all corrugated boxes, which helped them save about 1,000,000 pounds per year of corrugated with boxes would recommend Suja start working toward a zero-waste facility and shift to renewables.

Suja Organics has good worker safety programs that have been designed with OSHA consultants to keep mitigating workplace issues and provide the best work environment for Suja’s employees. I would like to advise Suja organic to provide some sort of incentives for its employees. Suja Organic packages are super recyclable, 100% BPA free and can be recycled in most curbside recycling programs. Suja accurately provides instructions to its consumers and retailers about package recycling on its website. Suja mentioned that if you buy Suja's product, you should recycle by emptying the contents of the bottle, removing the label, then discarding the label in a waste bin, and then replacing the cap and recycling it.

Suja Organic is a USDA-certified, non-GMO, cold-pressed juice company based in San Diego, California. Suja produces cold-pressed juices, waters, and drinking vinegar. It is the largest independent producer of cold-pressed juice sold in the USA. It was founded in May 2012 by Annie Lawless, Eric Ethans, James Brennan, and Jeff Church. Currently, Suja Organic's CEO is Jeff Church headquartered in San Diego, California. Suja began in 2012 from a shared dream to help people in San Diego transform their lives through conscious nutrition. In 2015, Suja Organic sold a 30% stake to Coca-Cola for $90 million and a 20% stake to Goldman Sachs' merchant banking division for $60 million. Suja was valued at $300 million when it sold minority stakes to Coca-Cola and Goldman Sachs, and it currently has about $100 million in revenue. But Suja does not mention why it sold itself to those companies.

I researched the reasons why Suja Organic has been sold, and I found that four of its co-founders, namely James Brennan, Annie Lawless, Eric Ethans, and Jeff Church, have other intended initiatives they would like to pursue. So, selling Suja organic would bring in significant capital for them to invest in other directions. I looked at Suja organic as one of the market leaders in cold pressured juice due to the fact that the global cold pressured juice market is forecast to grow at a high compound annual growth rate from now through 2026 due to increasing obesity rates, the growing prevalence of chronic diseases such as diabetes, and general consumer interest in nutrition and health.

Managing employee treatment and work conditions. Suja Organic Management is decent and helpful to its employees. However, the work is intensive, tiring, and repetitive. I would like to see Suja improve its working conditions fairly, and look into the needs of its employees. Another core concern that I have noticed in Suja Organic, all of its contributors and managerial structure lack diversity, equity, and inclusion. I would like to see Suja Organic shift its policies towards DEI. On top of that, I would also like to see Suja organic establish a cleanMile program in its supply chain settings.