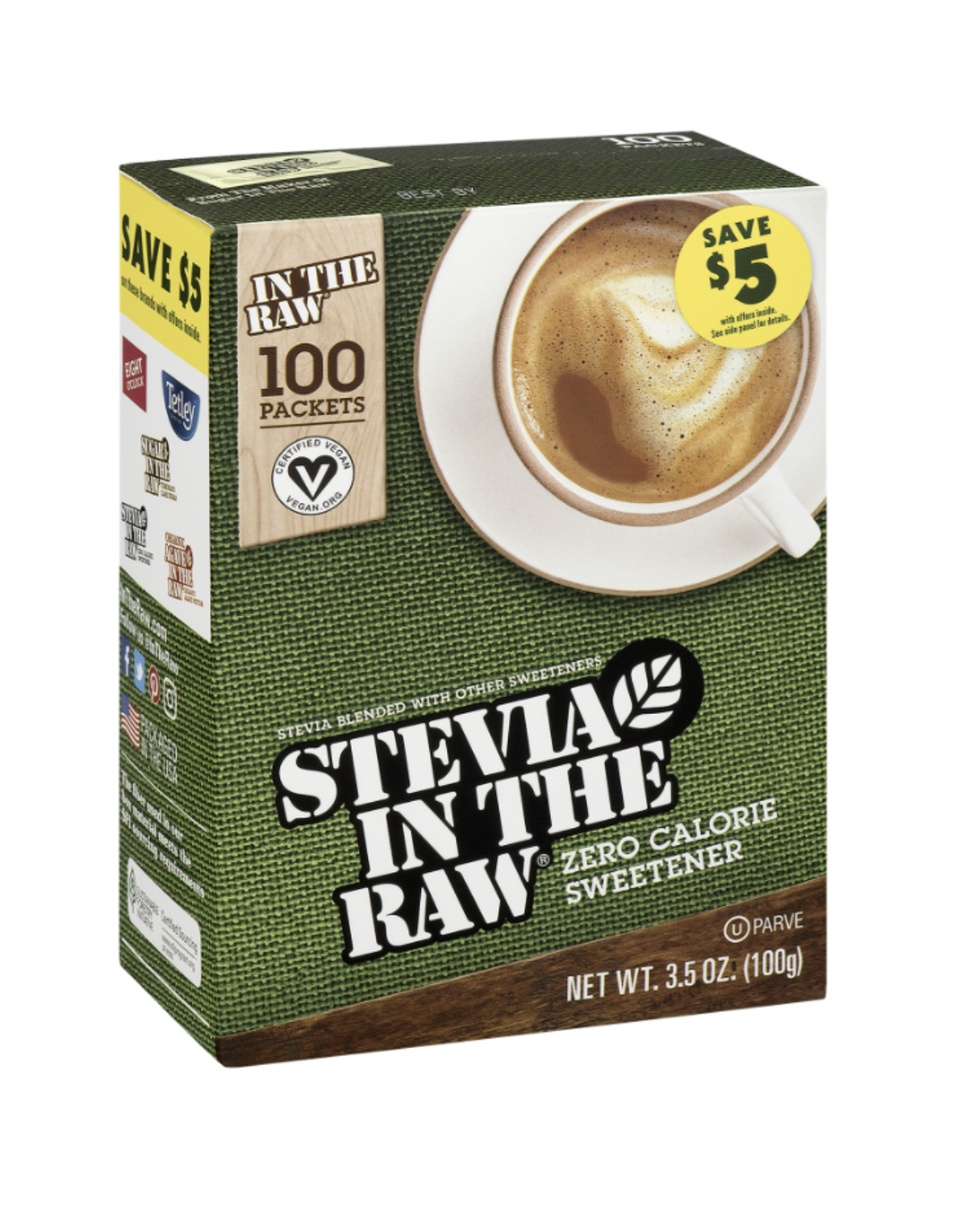 Stevia in the Raw

Over the past few years, there has been an increasing craze for alternative sweeteners, including Stevia in the Raw! This sweetener is derived from the Stevia Rebaudiana plant and is zero calories! This makes it especially appealing to those with diabetes or watching their health. In addition, traditional sugar cane is leading to deforestation and drying up rivers that locals depend on in South America. For those who want to have less of an impact on the planet and your health, I would incorporate more stevia sweetener in your diet. It is very similar in price too! Stevia in the Raw goes for about $0.02995 per half packet, equal to one packet of regular cane sugar, compared to $0.0258 per packet of Domino sugar. However, it does become more expensive when buying Stevia in the Raw Baker’s Bag at $0.73/oz compared to a 4lb Domino sugar bag at $.19/oz.

Stevia in the Raw is made of dextrose and stevia. Dextrose is a simple sugar, most commonly made from corn starch. Dextrose is the first ingredient listed, and therefore this product is very dependent on corn which is known to be water intensive. Stevia extract is 250-300 times sweeter than traditional sucrose (cane sugar). It is combined with dextrose to make a sweetener more comparable to sugar. One packet of Stevia in the Raw is equivalent to 2 teaspoons of cane sugar. It is considered zero calories because the FDA considers less than 4 calories per serving dietetically zero.

Stevia is made up of glycosides, which are not carbohydrates, therefore contributing little calories. After looking through over 200 peer-reviewed studies on stevia’s impact on the body, the JECFA (Joint FAO/WHO Expert Committee on Food Additives, United Nations) determined that you can safely consume 12 mg per kg of body weight per day. For a 150lb/70kg person, that is around 40 stevia packets a day. For context, the average American consumes 16.9 teaspoons of added sugar daily, equivalent to 8.45 packets of Stevia in the Raw. It was determined that the glycosides do not accumulate in your body and are excreted through urine and/or fecal matter. However, there have been a few studies showing stevia inhibiting bacteria development in your gut, but more research is needed. Therefore, I would advise to not fully replace sugar with stevia, but partial replacement would be beneficial!

There were few studies I could find assessing the water usage and carbon footprint of stevia in comparison to traditional sweeteners like sugar cane and high fructose corn syrup. I found one that was administered through Pure Circle Stevia Institute, which found that “the carbon footprint of several stevia ingredients was shown to be 79% lower than high fructose corn syrup (HFCS), 55% lower than beet sugar and 29% lower than cane sugar based on industry standards. The farm to sweetener consumptive water (blue and green water) footprint of stevia sweeteners has been shown to be 96% lower than cane sugar, 94% lower than HFCS and 92% lower than beet sugar, according to publically available benchmarks in water with the same sweetness equivalence.” In addition, stevia plants require little to none pesticide use because pests are not attracted to the plant due to its high sugar content. Although the results should be replicated from a third party, stevia seems to be a very sustainable sweetener alternative on its own. It also uses about ⅕ the land needed for other sweeteners. However, Stevia in the Raw should look for substitutes to dextrose to lower its ecological footprint.

Stevia in the Raw does not provide any information on the process to make their sweetener. Corn is very water intensive and often grown through monoculture. This decreases the soil quality and leads to soil erosion, polluting waterways and aquifers with excess fertilizer. Stevia in the Raw should take initiatives to ensure more sustainable sourcing with sustainable agriculture techniques including cover crop, drip irrigation, no-till, and efficient fertilizer use.

To convert corn into corn starch, the corn husk is removed and soaked in water with sulfur dioxide to soften the kernels for about two days. Sulfur dioxide is most commonly recovered as a byproduct of petroleum or natural gas and is used as a mild preservative. It is then milled and combined with more water and left to separate by density. Cornstarch is made up of the endosperm, or the starchy center of the kernel. The endosperm separates from the germ and goes through a centrifuge to separate the protein out from the endosperm, leaving corn starch. The cornstarch is combined with enzymes to form dextrose.

Stevia often has a bitter aftertaste from the essential oils, tannins and flavonoids found in the plant. Stevia in the Raw has a technique that is “more pure” and takes the bitterness away. I would assume that this more pure technique involves more processing and more energy to remove the extra oils, tannins, and flavonoids naturally found in the plant. The company does not include any information on their emissions, which inclines me to believe they are not using renewable energy.

Stevia in the Raw only has information about the company’s response to the California Transparency In Supply Chains Act of 2010 to hold suppliers responsible to human trafficking. The company performs risk assessments, audits, training, and ensures direct suppliers are in compliance with local laws relating to slavery and human trafficking. This seems to me like the bare minimum, what about ensuring farmers are earning a living wage with fair conditions? There is no other information on who makes the products, although 74.9% of stevia is produced in China which is known to have poor working conditions.