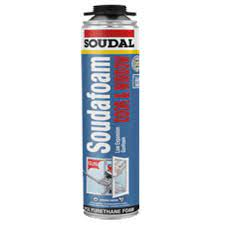 Soudafoam door and window is an insulative polyurethane foam product designed for installing doors and windows, but also used for connecting insulating materials in roofs and other construction elements. At the expense of non-ecological production, Soudal helps to build more energy-efficient houses. However, this is surely not enough in the ongoing fight against climate change.

The product’s main ingredient is a polyurethane (PU), a polymer substance that is commonly used for the production of plastic materials. The soudafoam formula is based on the technology of the liquid PU aerosol which hardens and expands when applied to the surface, providing an airtight insulative bond. While toxicity isn't as much of an issue with polyurethane, the versatile substance is still made from fossil fuels, which means that plenty of carbon dioxide is emitted during production. According to the Association of Plastics Manufacturers in Europe, producing a pound of polyurethane foam emits 3.7 pounds of CO2. Despite the fact that long-running environmental problems are completely ignored, the company at least takes actions to improve the safety of their immediate workers. For instance, they have created an isocyanate-free formula, as the isocyanic is known to cause severe asthmatic attacks.

Apart from the fact that this material is produced exclusively from artificial substances, its biggest disadvantage is poor durability. It deteriorates rapidly when exposed to moisture, wind and sun, which means that it often needs to be replaced, creating more and more landfill waste. The company certainly should invest in this area not only to improve the environmental aspect of it but, also to increase the product quality, making it last longer. This way, the product certainly would become more attractive to the consumer, while also having less of a negative impact on the planet. A perfect “win-win” solution.

Manufacturing of the soudafoam involves strictly chemical processes, which require the use of extreme amounts of energy. It is evident that it all starts with some sort of liquid oil derivative, but what happens next? Specific steps of the processing are unknown to the average consumer. The company is proud to announce that they strive to make environmental adjustments in their production by using the heat recovery systems and rainwater recuperation, however, any exact savings aren’t given in numbers, which makes these statements not reliable. This approach, combined with fully plastic reliant production, shows Soudal’s complete ignorance about the environmental problems and highlights the fact that the company should be called for immediate action.

Soudal is a large international company that originated in Belgium in 1966 as a small factory specializing in the production of polyester putties and high-quality silicone sealants. They advanced the technology of these synthetic formulas so much, making it quite understandable why they still rely just on polymers. The company’s biggest priority is making a high-performance product, and the plastic foam formula seems like the best solution so far, at least with no competing sustainable product available on the market that is as effective as the traditional plastic one. Still, this does not release Soudal from the responsibility of thinking about the future of our planet, and the company should make more of an effort to advance the technology and move away from plastics. On the other hand, Soudafoam’s role as the must-have of every construction project visibly contributes to the reduction of energy losses in buildings and consequently reduces emissions. Emphasized in the sustainability information on the website, Soudal products help with obtaining certificates like BREEAM® - European quantitative standards for low impact architecture, considered academic and rigorous. In short, the company’s motto should be: helping to build more energy-efficient houses at the expense of non-ecological production.