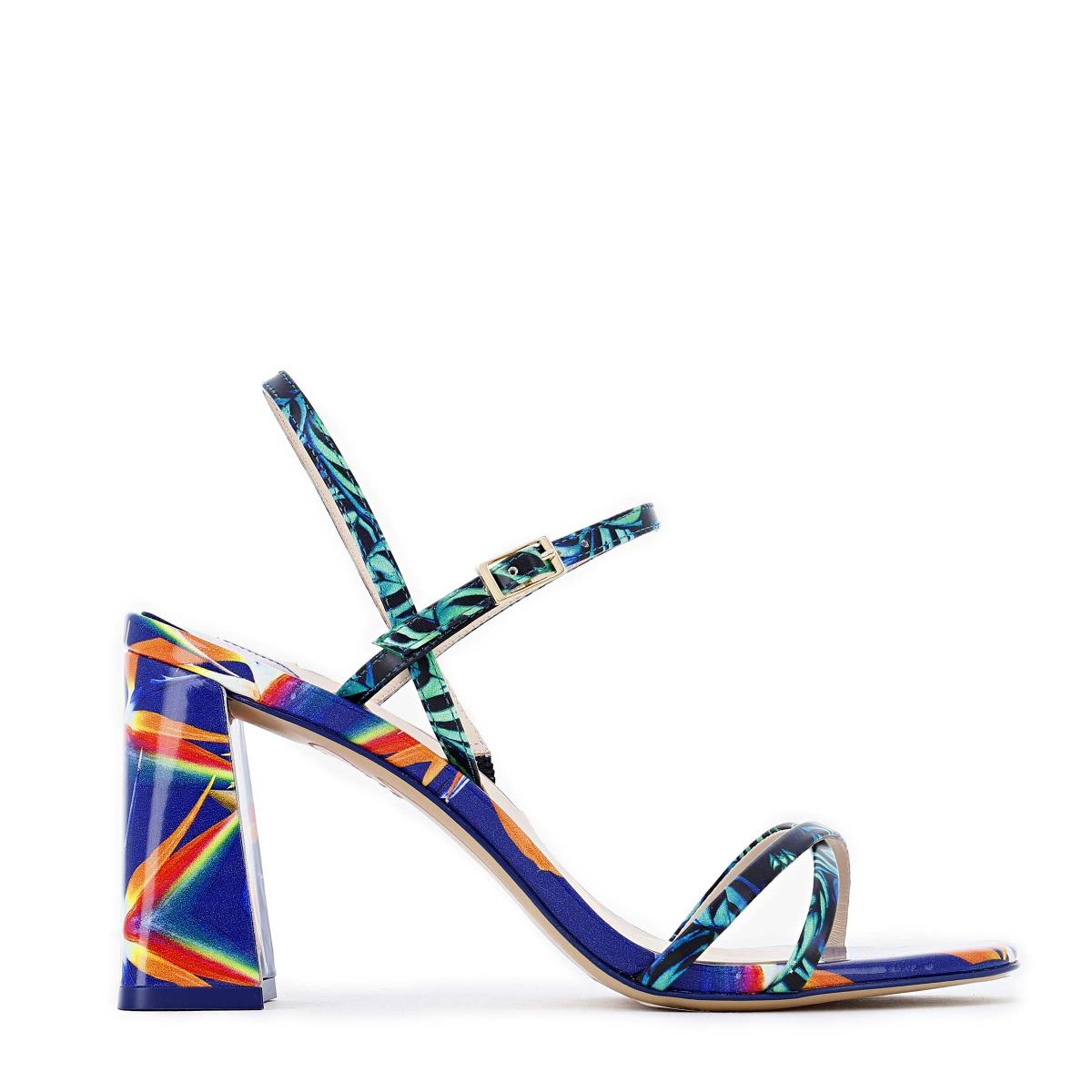 Sophia Webster is a designer footwear company, produced by a British fashion designer. The unique designs have grown in fame and creates high demand for this relatively small designer brand.

The upcycled collection is a series of limited-edition shoes that are released. They are created from scraps or extra textiles from previous season shoes productions, especially from those exhibited at Fashion Week shows, repurposing short-term shoes or the extra products from the production. The materials generally consist of fabric and leather, trying to use upcycling to show environmental consciousness of the brand and the efforts to integrate it with their brand design by creating an entirely new and attractive design. The number of shoes in each design is extremely limited as it entirely relies on the remaining textiles, and often range in the 40s, showing the small range of the collection that comes out of just a few shoes that were previously produced.

So far, the upcycled collection has been released in January 2020 and then in May 2021 which even shared some of the same shoe series fabrics used, such as the Spring Summer 2017 “Dolly’s Bird of Paradise” shoes from London Fashion Week. By upcycling, it benefits both the environment and the business for further revenues. There is still a chance of some environmental damage in the reproduction of materials used for the shoes to repurpose them.

However, apart from the collection, there is a complete lack of information in efforts made for sustainable material sourcing, none for the potential animal harm through the use of leather, a lack of initiatives to even offset global exports and no mention of who or where the shoes are produced. While the brand is rather new, this lack of information is dismaying, showing a lack of concern in the production cycle and this minimal effort at environmentalism. Unless this is followed through with further brand transparency, the campaign could be acting as a form of greenwashing. Consumers need to inform the brand that they want to hear and need to hear these different aspects of sustainability to make more informed purchases and also inform them of how to improve business and customer reception.

The exterior design components of the shoe consist of leather and textiles. It is unspecified what the heel is made of, and this could either be cork or plastic.

The production of leather is a long process and involves various chemicals in the treatment of the material. Leather comes from livestock, often cows, and through the process of breeding livestock, it has many related environmental damages, such as methane emission increase, overgrazing and soil depletion, and land clearing for monoculture feed production. It is also a very expensive activity. The source of hides is not specified, and in the case of desirable italian leather is likely that the material has been outsourced. In order to transport the material, the items would have to be climate controlled, requiring further gas and energy usage for the mechanism for this, as well as the high levels of emissions from either the vehicle or air freight transport of the material. If the leather is stored for longer use, it is salted, which is an unnecessary pollutant. When the material is being cleaned before tanning, there are high levels of effluence produced, and may cause eutrophication, which can be assumed since the brand made no specification of the care that their suppliers take. The use of dyes are often not bio-based, resulting in more chemical involvement. This creates a risk of pollution when it is disposed of. While leather can be biodegradable, the toxic chemicals that might be used for cheaper and faster production can cause damage to the surrounding environment.

The textiles used are not specified, adding to the lack of transparency of the brand. Textile production may originate from cheap labour sources due to the mass production and require a lot of water during its production process. The environmental impact or biodegradability of the material is only possible to be analysed if the type of textile is specified.

If the heel is produced from plastic, it results in high ghg emissions from the melting of the material due to the fuel source as well as the chemicals released due to the reaction of the material to high temperatures. Additionally, it doesn’t degrade before a minimum of 500 years, resulting in a release of toxic microplastics in the meanwhile and are often not disposed of correctly.

During the production of the shoe, industrial cement is sometimes used to hold the pieces together, which is extremely damaging as a material. This originates from crude oil, which requires high temperatures and the use of fossil fuels for the production of the material, in addition to toxic chemical emissions. There are therefore many hidden environmental damages through the production of shoes.

The upcycled collection helps to pay attention to the waste from the production process, by reutilising materials. This addresses the common issue that fast fashion has, with single use fabrics for unique designs, not usually reused. This helps put off the accumulation of more waste and makes use of products purchased by the brand. However, this does not mention the rest of the shoe mould being made out of extra materials or even recycled materials which it could easily be made out of, such as recycled plastic.

The lack of mentioned concern over the supply chain, material sourcing and shoe production makes us believe the worst case scenario of unsustainable processes which can be cheaper and lets the company cut corners. However, as the shoes would be material-produced, it does increase the precision and reduced wastage of material due to precise creation. For the sourcing of leather, there is no mention if it is locally or internationally sourced and processed. The chemicals used in tanning could be toxic during disposal if the conscious choice of bio materials is not made. Furthermore, the effluent during the cleaning of hide could easily cause pollution by not taking care of its disposal. The emission control during the use of thermal cement and plastic production is not mentioned, creating the chance for further industrial air pollution.

There is no addressing of the post-use destination of the shoes. Since they are made of different materials of various degradability levels, they could be very polluting if disposed of incorrectly, due to the material properties and the chemicals involved. Therefore, it can be assumed that they would commonly end up in landfills without the education of consumers on how it might be disposed of instead.

There is also no mention of eco packaging, which could add to the wastage during the production process, such as the use of tissue paper for wrapping the shoes and the lack of using recycled paper cardboard boxes.

The brand has absolutely no information on its labour policies or those involved in the production, showing a lack of care for the supply chain. This is an especially large issue considering the size of this chain since it is shipped to USA, the EU region, Australia, Canada and China as well as being distributed in the UK. Therefore, there is a high risk of cheap labour being involved in the process.

This is especially notable for the sourcing of their materials, which contribute to the fast fashion industry. While their pieces are designer and less consumed, they don’t contribute as much to fashion waste but nonetheless unless they pay attention to their supply chain workers are just as bad as other fast fashion brands.

However, the brand is good for inclusivity and racial diversity. While we may not know this during the production process or the core team, there is high consciousness of diversity inclusion in their marketing, through the use of many Black models. In addition, they hold an annual campaign for Juneteenth, recognising the importance of raising awareness for social inclusivity. They also contribute financially for this social issue and spoke up and further raised awareness of the BLM issues in 2021.

The shoes themselves are produced over an extended size range, extremely unique for a designer brand. This helps a wider audience feel comfortable with the brands efforts for inclusivity in the consumption of the shoes.