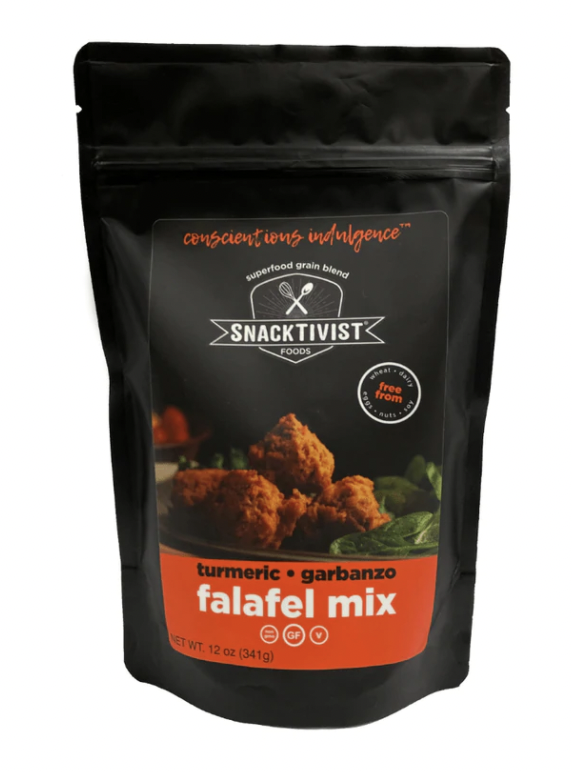 After hearing about Snacktivist Foods during a meeting with Voiz community members, I was very interested in exploring the company after hearing the founder, Joni Kindwall-Moore, was passionate about reducing monoculture farming to promote plant diversity. Their slogan “conscientious indulgence” really stood out to me as both a foodie and an environmental science major. Overall, this product earned a lower score than I initially expected. However, this doesn’t mean we should discard Snacktivist’s products; I’d still be interested in trying this product. Though they lack transparency in the sourcing of their ingredients and the process of making these mixes, Snacktivist Foods is still a small company with lots of opportunities to improve.

The Turmeric Chia Falafel and Breading Mix includes garbanzo flour, garlic powder, sea salt, lemon juice crystals, baking powder, chia seeds, citrus pectin, and spices. I first noticed that there is a disconnect between the packaging and what the product is titled on the website: the bag lists turmeric garbanzo falafel mix while the website lists “Turmeric Chia Falafel and Breading Mix.” However, both names are not fitting for the product as the specific spices are not listed in the ingredients list, so I do not feel like turmeric should be advertised in the product name. On the other hand, Snacktivist Foods stays more true to the part of their label stating “superfood grain blend.” Most Snacktivist products, like their brownie mix or focaccia mix, are composed of ancient grains like sorghum, millet, and brown rice. For this product, the primary ingredient is garbanzo flour, so I would consider this a superfood, but not a grain blend. Though they’re a legume rather than a grain, garbanzo beans, or as I refer to them, chickpeas, are most definitely a superfood. Chickpeas are considered a superfood because they offer very important nutrients, being high in fiber, protein, and antioxidants. Additionally, chickpeas are legumes, which make them nitrogen fixers, converting N2 gas to NH3, a nutrient for plants in soils, through a symbiotic relationship with rhizobium bacteria along the root system. This product is also gluten free, vegan, free from wheat, dairy, eggs, nuts, and soy, and non-GMO. My only concern for their claim of non-GMO is that they are not officially certified by the Non-GMO Project. Instead, their website notes “all living ingredients from non-GMO sources and sourced organically when available.” Are these “living ingredients” just referring to anything plant-based in the product? Which ingredients are able to be sourced organically and how often? For the nitrogen-fixing benefits provided by growing legumes, but uncertainty as to where these ingredients are sourced though they are anti-GMO, Snacktivist receives a 1.2 in what their product is made of.

Though Snacktivist Foods perform great in other sections, they are severely lacking information in how their product is made. When researching other garbanzo flours, I’ve found that they can be stone ground, which significantly decreases energy use. I’d assume Snacktivist Foods instead uses large mixers, which are more energy intensive, to make their products. This is possibly an area in which they could improve, but we don’t know until we can receive more details on their production process. In making the mix into a batter, the only additional ingredients needed to be added are water and cooking oil. I think it would be helpful to suggest what is the most allergy-friendly or environmentally-friendly oils to use with their product, just to provide some source of direction. They already make suggestions of the foods to pair their falafel with, along with recipes for vegan and non-vegan tahini sauce, so why are other parts of their website lacking? Lastly, the packaging used is plastic, contributing to the already extensive amounts of plastic that go into landfills annually. I really do not see any effort being made for any aspect of how this falafel mix is made, earning this section no points.

Snacktivist Food is a small, women-owned, family-owned business based in Idaho. It was founded by Joni Kindwall-Moore, a registered nurse, because of her personal, severe allergy to eggs. Her children also have several food allergies. Through this, she noticed processed foods are making us sick; we need to find a way to grow food that is healthy and sustainable. Though GMOs have helped produce larger amounts of food to feed a continuously growing global population, they also significantly decrease seed diversity and create problems for small farms. This is why Snacktivist focuses on not only producing gluten-free mixes, but also using ancient grains to promote plant diversity. Kindwall-Moore seems to be deeply involved in the development of her business, and genuinely cares about the issue she is trying to solve in producing allergy-friendly, GMO-free products. Snacktivist Foods is also a B Corporation, exemplifying their prioritization of environmental and social standards within their business. It is a very future-oriented business, stating “consumer-driven brands will be the champions for building healthier people and a healthier planet.” Because of their support for their mission statement, but not expanding their impact beyond the business, Snacktivist Foods receives a 1.5 for who makes it.