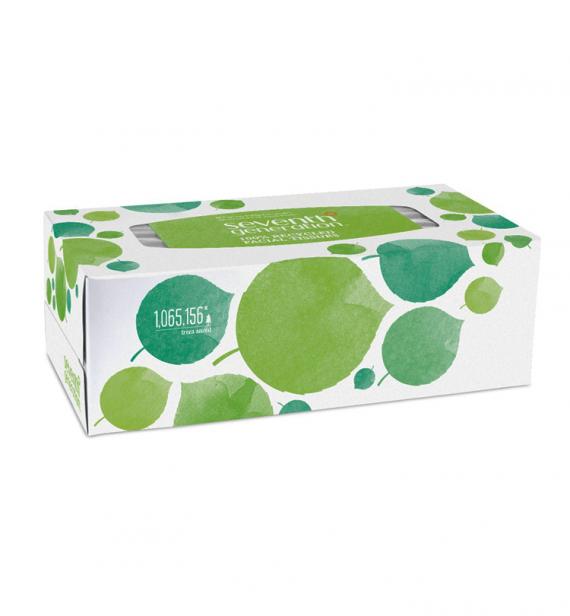 Back in 2013, it was estimated that American’s used over 255 billion facial tissues per year. For someone like myself however who has really bad allergies, that number doesn’t really surprise me. Tissues are to me like insulin is to a diabetic, something you just can’t live without. But for something that is only used for a few seconds of the day, it sure has a massive impact on the environment. One company by the name of Seventh Generation is trying to solve this issue, by using 100% recycled paper. In fact, if every American were to switch from one box of virgin facial tissues to recycled, it would save a whopping 385,000 trees. Known for putting the environment first and business second, Seventh Generation excels at product transparency and corporate responsibility. They strive to use all natural ingredients and aim to close the loop when it comes to dealing with waste. As great as this sounds, they still have their work cut out for them. An alarming presence of BPA has been detected in their recycled paper source and their GHG emissions are continuing to rise. For these reasons, I believe Seventh Generation deserves a sustainability rating of 1.7 planets.

Seventh Generation’s facial tissues are made of 100% recycled paper sourced from the United States. Of that 100%, at least half of it comes from post-consumed goods. These are items such as milk jugs, newspapers, and even cardboard boxes that have been previously used by the consumer. Instead of being thrown away in a landfill, however, the materials are recycled, repurposed, and officially labeled as ‘post-consumer recycled’ or PCR for short. The rest of the facial tissue is made of pre-consumed recycled content. This mainly consists of paper scraps leftover from the manufacturing process which never make it to the consumer. The nice thing about using recycled goods to make new products is the fact that it requires less natural resources. Therefore, Seventh Generation is able to reduce its environmental impact by refusing to use virgin materials in their facial tissues.

I’d also like to point out the ingredients that are absent in their facial tissues. For instance, compared to other competitors, Seventh Generation uses chlorine-free chemicals to whiten their tissues. In doing so, they are able to prevent chlorine from contaminating the water supply and harming the environment. They also don’t use any dyes or fragrances in their product. These types of additives are usually made of petrochemical derivatives such as oil and tar, which can lead to bad air quality and increased global warming. While Seventh Generation has been able to eliminate most of the dangerous chemicals used their facial tissues, they’ve recently identified small trace amounts of bisphenol-A. Referred to as BPA, this chemical causes problems related to reproduction, immunity, and neurological functions. According to Seventh Generation, the source of BPA comes from thermal papers used in cash registers, ATMs, and other receipts. Since these forms of paper are used in the recycling process, the BPA is able to make its way into their newly repurposed facial tissues. In order to combat this issue, the company is working with regulators, NGO’s, retailers, and paper manufacturers to come up with a solution that will align with their strict sustainable standards.

Seventh Generation’s facial tissues start out as large piles of recycled wood pulp. At the manufacturing mill, the pulp is mixed with water to create a batch of individual fibers known as the stock. To help get the stock into the right consistency, even more water is added until it occupies 99% of the mixture’s volume. From there, the cellulose fibers within the stock get separated at the refinery, where the percentages get flipped to 95% fibrous material and 5% water. Luckily, most of the water used in the process gets recycled so it doesn’t require all that much. After that, the sheets of fiber are steam dried into large rolls, where they are cut, assembled, and ready to be distributed to the consumer. As you could imagine, this process requires the use of heavy machinery and lots of input energy. However, Seventh Generation is trying to do their best to curb emissions in the tier 1 manufacturing stage, by convincing 28% of their partners to switch to 100% renewable energy. While 28% is better than nothing, a majority of the facilities’ energy needs are still being supplemented by fossil fuels. For a company that prides itself on environmental sustainability, I would expect them to have stricter standards when it comes to deciding who to do business with.

Seventh Generation has been around for 30 years and is destined to achieve their mission of transforming the world into a safer, equitable, and more sustainable place for seven generations to come. As a certified B corporation, they have successfully proven to balance profit and purpose through public transparency, legal accountability, social equity, and environmental performance. Every year, they release a corporate consciousness report that allows consumers to keep track of their progress and stay up to date on how they plan on achieving their goals. Unfortunately, they haven’t been able to meet their climate goal, as their GHG footprint is 140% higher than what it was in 2012. With intentions to lower it to IPCC recommended 2030 levels, Seventh Generation has come up with a plan to address the issue. According to the report, they are adopting more renewable energy from suppliers, concentrating on laundry products, and sourcing certified palm kernel oil to help reduce their emissions. It’s also important to note that the majority of their footprint stems from consumer usage. Therefore, Seventh Generation should focus on ways to help clean up the electric grid to help lower their products life cycle emissions. While Seventh Generation didn’t meet all of their 2020 goals, I applaud them for taking the time to acknowledge that fact and provide consumers with an in-depth report on how they plan to change the world for the better.