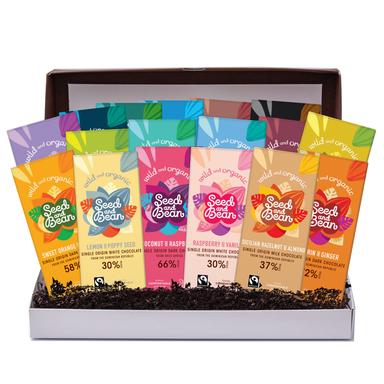 Founded in 2005, the idea behind Seed & Bean was to create an ethical range of confectionery. Their focus has always been on using organic ingredients and small-scale suppliers as well as being brave and wild with their flavours.

Seed and Bean are 100% organic and they say they are Fairtrade where possible. Their products are ethically sourced and handmade in England. In 2019, they re-branded their packaging to highlight all their ethics as clearly as possible.

They have been accredited as one of the most ethical chocolate producers in Britain by The Good Shopping Guide, every year from 2011 to 2019. In addition, they were the only brand to have scored a perfect 100 ECI, receiving top marks across all ethical categories in the years mentioned. In 2020 and 2021, they were awarded 92 points, second-highest behind Divine chocolate which scored 96, due to leaving the Vegan Association, but still producing vegan chocolate. They have also attained Ethical Accreditation by the Good Shopping Guide.

Seed and Bean produce a core collection of 18 chocolate bars. All 18 of these are branded as organic, single-origin and palm oil free whilst 16 of the bars are Fairtrade certified and 14 are branded as vegan.

Being part of The Soil Association, they ensure all the ingredients they use to create their wild flavours are organic. In addition, they use Fairtrade approved suppliers wherever possible.

Since their 2019 re-branding, they have also sourced and began using 100% compostable foil which has made Seed and Bean the first UK chocolate brand to have fully compostable packaging. The inner foil is made from Natureflex, a specially sourced, flexible cellulose film made from eucalyptus wood pulp. This has put them at the forefront of the zero plastic and zero waste initiative.

Their production facility is small, with a batch size of 45 litres compared to larger-scale chocolate producers who make batches of 20,000 to 50,000 litres a batch.

Despite the company not publicising the step by step guide of how their bars are made. Upon further research, I have a rough idea of the bean-to-bar process.

The process begins with the harvesting of the cacao pods. The pods are then split open to reveal the cocoa beans which along with the pulp are scraped out and left to ferment in baskets for 2 to 8 days. Once fermentation is complete, the beans are spread in a single layer and left to dry completely. Once the fermentation and drying processes are completed, the beans can be packed and shipped to the manufacturers. In the manufacturing facility, they are roasted to bring out the most intense chocolate flavours and colours. The time and temperature of the roasting depends on the type of beans and their relative moisture levels. The next step is transferring the beans to a winnower where the shells are removed leaving the nibs which are full of cocoa solids and cocoa butter. Following this, the bibs are ground to a thick, rich paste referred to as chocolate liquor which is the foundation for all chocolate products. The chocolate liquor is pressed to remove the cocoa butter and leave behind a powdery disc called cocoa presscake which when pulverized becomes cocoa powder. At this stage, the process depends on individual manufacturers, the recipes and additional ingredients they may use.

The core process itself whilst labour intensive does not seem energy or water-intensive and therefore is not particularly harmful to the planet. In addition, Seed and Bean could be classified as artisanal producers of chocolate due to the relatively small batch production they undertake, and the fact that they state that all their bars are handmade in England. This combined with their business ethics makes them a much more ethical and sustainable producer of chocolate than the majority of alternatives, at least in the UK.

Sourcing Ingredients that are Fairtrade wherever possible means that farmers get paid a fair price for their labour. Fairtrade aims to support farmer and worker communities by promoting a certain standard of living and better working environments. Furthermore, it is the farmers themselves who decide how the Fairtrade Premiums should be invested, whether that be in schooling, transport, healthcare or improved equipment.

The manufacturing of the chocolate takes place in England, in small batches. It can therefore be assumed that these workers are treated in accordance with UK Laws for health and safety standards and paid at least a minimum wage.