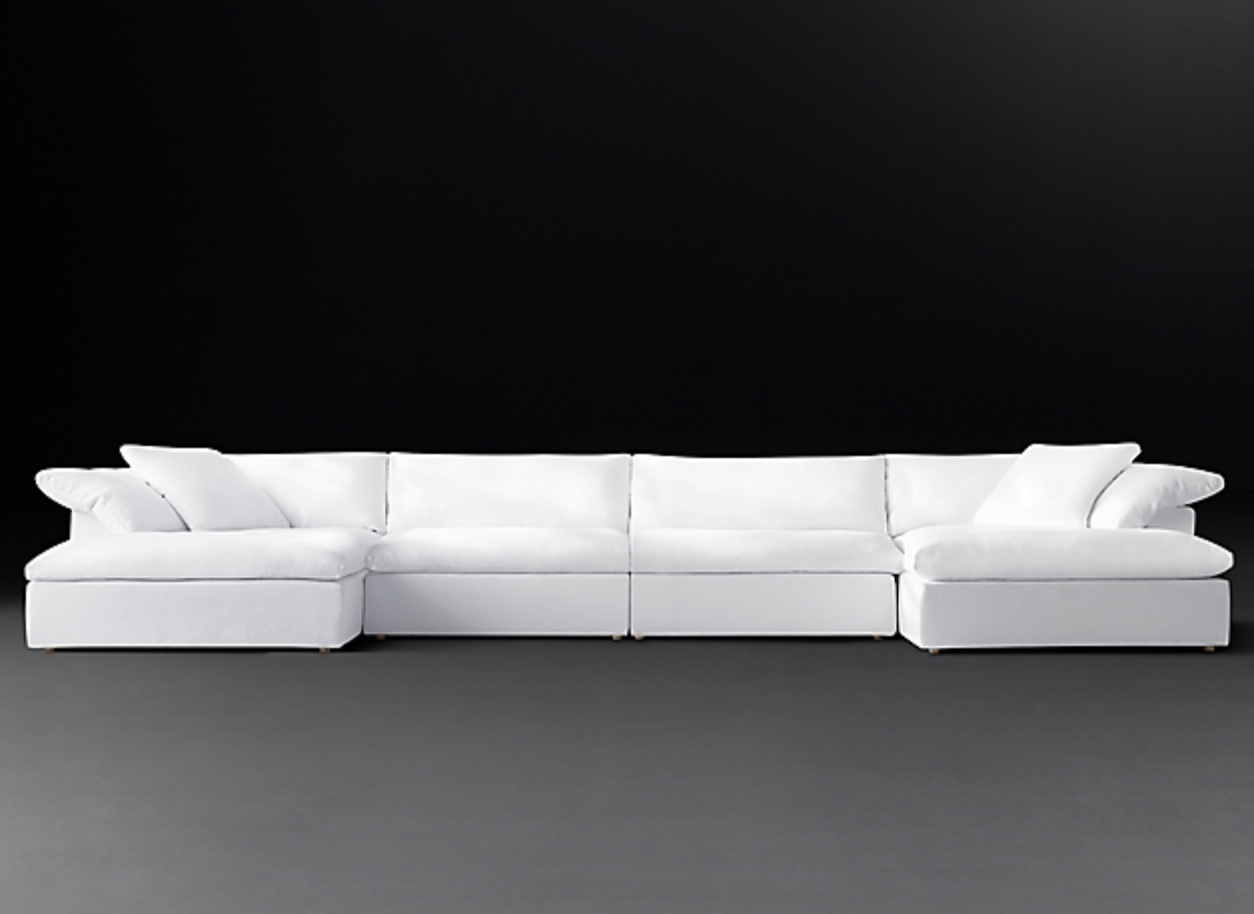 The Cloud Collection of sofas and sectionals embodies the loose rustic yet modern luxury Restoration Hardware excels at. This luxury sofa is made of higher quality materials than a cheaper sofa, with natural materials like linen and down. The linen is a more sustainable fabric, but the process of extracting large quantities of goose down is potentially problematic. Restoration Hardware has rebranded itself quite dramatically in the past decade and a half, and RH has been desperately working to prove to investors that it is a viable and profiting brand. The rebranding that occurred in the early 2000s meant a shift in production to China and Southeast Asia. This profit-seeking action has led to issues with quality consistency, nebulous ethics, and questionable sustainability. However, the RH customer does not seem too concerned with these issues. The Cloud Collection is a trendy sofa found in all sorts of influencers’ houses. The frankly absurd scale of the sofas (as well as all of RH’s furniture) represents a nonchalant air of luxury—something many young people with new wealth are drawn to. The Cloud Collection really is a status symbol. And while it is not plastered with the words “Restoration Hardware,” everyone knows where it is from. If you have the money to spend on a cloud sofa, you could choose a more sustainable furniture brand. Even better, if you have the extra funds, buy a vintage designer sofa with some semblance of design integrity.

Restoration Hardware sells the Cloud Collection as customizable pieces, so materials depend on those choices. However, there are more popular materials, which most consumers would lean towards. The sofa’s frame is made of kiln-dried hardwood, with a suspension frame of springs and high-density foam. The most common material for the slipcover would be linen, which Restoration Hardware offers different performance levels (i.e. durability of the fabric). The Belgian Flax Linen, the advertised upholstery fabric, is advertised as 100% Linen, a natural material. However, this linen is somewhat mis-advertised, as it is not Belgian Linen completely produced in Europe, but grown in Europe and shipped to China for weaving. Linen is made from the flax plant, which can be used in many ways other than linen (none of the plant is wasted). Linen uses less water than cotton and can grow in lower quality soil. Linen production also requires fewer pesticides than many other fibers. The linen is still a natural fiber, which will wear nicely over time.

The cushion fill has two options: 100% goose feather-down or feather wrapped core. The feather wrapped core consists of feathers, a foam core, and a feather-polyfiber blend. The goose-down fill is an important factor in the Cloud Collection. While the feather/foam option is available, it does not lend as well to the “Cloud“ as it gives the cushions a firmer feeling. The feather-down cushions are perhaps the most issue-laden part of the couch. The cushions each contain 8.2 pounds of down—over 45 geese (per cushion!). The couches range from 8 to 13 to even 20 cushions per configuration. Animal activists have reported on the process of live-plucking geese for their down. This process is illegal in the US, Canada, and most of Europe, but not in China. Additionally, some people have allergies to down, which means they could not purchase the Cloud Collection at all. If you are concerned with animal welfare, this is not the couch for you.

There is not much information from RH about their supply chain, but other sources reveal that RH has most of its manufacturing done in China or Vietnam. The products are designed by American and European designers, who are often featured in the Source Book and on the website. There is some controversy that RH buys from Chinese suppliers, meaning lower quality and higher price markups, even possible human rights issues. This is not surprising. Some people may believe that luxury furniture brands have higher production standards. However, we often see that luxury fashion brands use sweatshop labor, so it would not be outrageous to assume a popular luxury brand like RH would as well. Some internet reviews that state the quality of RH products varies and does not always match the four to five-figure price tag. In 2018, RH released a report stating that 40% of RH product was sourced from China in 2017, 35% in 2018, and an expected 25-30% in 2019. This report was in response to the proposed tariff, not as a response to consumer concerns. The Corporate-Social Responsibility page on RH’s website mentions their compliance with California Transparency in Supply Chain Act, where they actively manage their supply chain to prevent exploitative labor products. The CSR page is underwhelming and gestures at responsible and sustainable sourcing, but does not give any concrete initiatives. The sustainability section only mentions LED lighting in one retail location and one distribution center, as well as using recycled and FSB certified paper in their hefty Source Books. There is (barely a) mention of an RH Factory Audit Program, which allows unrestricted access to vendors’ facility and interviewing of vendors’ workers. RH apparently cancels orders or terminate business with vendors found with violations, but who knows if they actually change vendors. RH gets most of its products from China, Vietnam, India, and Indonesia, so there is no guarantee that the workers were treated fairly. The linen RH uses is grown in Europe, but shipped to Asia for manufacturing.

Restoration Hardware, or RH, is a publicly-traded, luxury furniture retailer serving the United States and Canada. The brand is based around a California-modern aesthetic, with large scale pieces seemingly only fit for large mansions. Restoration Hardware has become a status symbol for the nouveau riche, especially young, casual millennials who have seen these eponymous couches all over Instagram. Thus Restoration Hardware is not a luxury brand because of craftsmanship but branding. Restoration Hardware was rebranded in the early 2000s as they took on a new CEO, Gary Friedman, who was previously the CEO of Williams Sonoma Inc. Friedman was responsible for the brand overhaul, which revitalized the brand (including a renaming from Restoration Hardware to RH, which I have been using interchangeably). Friedman pushed to renew the retail experience, with giant flagship galleries and pounds worth of catalogs. The Cloud couch is quite common on Instagram, as other staple RH pieces are. The RH brand is not concerned with marketing sustainability, but rather an aesthetic and quality of luxury. In the RH Source Book and Letters from the CEO, there are mentions of quality and craftsmanship, not sustainability. On RH’s website, the only information about Corporate-Social Responsibility or Sustainability is on the Investor Relations page. Thus RH is leaning towards CSR and sustainability because of investor pressure, not consumer pressure. Since RH is a luxury furniture brand, they are more forthcoming with information about the materials, but not necessarily their supply chain. Based on this, it realistic to believe that RH customers are more interested in quality and aesthetics than sustainability. It seems like RH would be more interested in marketing for sustainability like we have seen some luxury fashion brands. RH is a status symbol because if you had money to spend on a couch, you could choose a more sustainable brand.