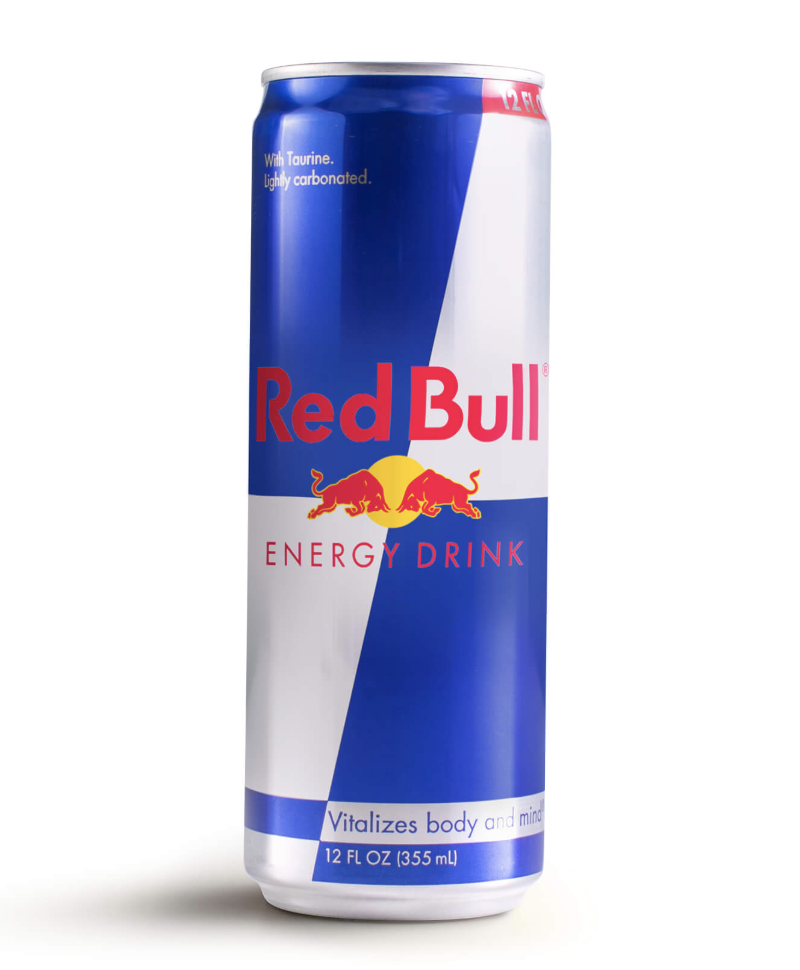 Every college student has encountered a night of doing homework where he or she has realized that it is going to take an all-nighter to accomplish all of the work that needs to be done. What do they usually turn to? Energy drinks. Specifically, the Red Bull Energy Drink is one of the most sought-after elixirs to cure the wave of tiredness that sets in late at night in order to crank out that 10 page paper due the next day. This energy drink aims to increase performance and concentration, while improving mental alertness and stimulating metabolism throughout the body. As a company, Red Bull’s website is substantially transparent on the processes carried out to produce the energy drink, as well as what ingredients are in it and where they are sourced from. They have undergone evolving their company over the years to align with more current standards of sustainability by implementing a number of sustainable initiatives that impact their products from the way they are made to the consumers who drink them and the fans who support them. They have also expanded their values of social and environmental change to creating programs that inspire younger generations to develop their own ideas that will tackle social and environmental issues into the future.

Being an energy drink, Red Bull contains a slew of ingredients in order to keep the consumer energized after drinking it. On their website, Red Bull outlines the main ingredients and the beneficial effects they will produce after drinking the product. The primary sites that host the production of Red Bull’s energy drink are located in the Austrian and Swiss Alps. The main ingredient found in Red Bull’s energy drink is water. The high quality alpine water used for the drink is sourced locally from nearby springs. It is incredibly efficient as the water is available copiously and constantly replenished due to the Alps being one of Earth’s largest freshwater reservoirs. While this is the case, climate change is already increasing evapotranspiration in the Alps; surface water is declining and precipitation is decreasing in certain seasons. If this crisis continues, there could be an issue with water demand and supply; if the demand for water for human consumption and usage rises due to a lack of supply, Red Bull could be escalating the problem with their use for the production of their energy drinks. The next most abundant ingredient in the drink would be taurine. Taurine is an amino acid that is naturally found in the human body as well as many of the food groups we eat such as fish and poultry. It works to move minerals through our system as well as generating nerve impulses to keep us stimulated. There are about 1000 mg of taurine in one can of Red Bull. While many people still believe this ingredient is sourced from bull semen, the taurine used in Red Bull energy drinks is synthetically produced in a laboratory by pharmaceutical companies. The production of this does not seem to show any adverse effects on humans or the environment. The European Food and Safety Authority (EFSA) also concluded in 2009 that the taurine levels found in Red Bull are safe. The next ingredient is caffeine, well-known for stimulating our minds and bodies when consumed and found predominantly in the coffee and tea we drink. The amount of caffeine in one Red Bull is the same as the amount in one cup (250 mL) of coffee; this means it is a generally safe amount of caffeine for those who wish to be alert. The next ingredient would be the sugars, sucrose and glucose, aiming to allow for longer, more intense activity. The amount found in a Red Bull is around the same amount of sugar you would find in an orange. While some versions of the drink are sugar-free, the original flavor has 11 g of sugar per 100 mL. The sugar is sourced from sugar beets. Beet sugar requires less land and consumes significantly less water than the production of cane sugar. In the EU, it is grown in rotation with other field crops to conserve soil fertility and minimize the levels of pests and pathogens found in the crops, therefore lessening the need for pesticides. The last set of ingredients are the water-soluble B-group vitamins niacinamide (vitamin B3), pantothenic acid (vitamin B5), vitamin B6 and vitamin B12. They aid in normal mental performance and energy-yielding metabolism. The taurine, caffeine, and B-group vitamins are all high quality due to their synthetic production, and all of the ingredients listed comply with the necessary food regulation requirements.

Regarding the packaging, the Red Bull cans have evolved to be 60% lighter than they were in the past and are 100% recyclable, being made from aluminum. Recycling this kind of can will use 95% less energy than the amount needed to produce a new aluminum can for the next energy drink, all while maintaining the quality it initially was created with. They are also strong, compact, and lightweight, and can be melted down and recycled an endless amount of times. Along with the cans, the material the cans are placed in to sell are made of recyclable cardboard, maintaining a resource-conserving standard throughout the entire product. While this is the case, it is still up to the consumer to responsibly dispose of these products in recycle bins for the sustainable packaging to live up to its potential.

To align with the UN Sustainable Development Goals, Red Bull has recently changed their two production sites in Austria and Switzerland to “wall-to-wall production” sites, specifically targeting SDG 12 “Responsible consumption and production.” This process minimizes the distance that the cans need to travel throughout the production process by keeping the production of the drink and the filling of the cans to be fulfilled on site at the same location. Then, the bulk of the cans are transported by rail to their ports to ship around the world. Using railways is vastly more sustainable than using trucks because of the greater fuel efficiency and the much fewer greenhouse gas emissions produced. This production process also means that it is possible to save the emissions that would normally be produced from more than 30,000 truckloads (~14,330 tons of CO2) per year due to not transporting or processing more than 5 billion cans per year before they leave the site to be shipped out. To target SDG 13 “Climate action,” the ECO-coolers used to store these energy drinks utilize LED lighting, natural refrigerants, energy efficient fans, and the implementation of an automatically activating ‘night mode.’

Red Bull, as a company, has taken on a number of initiatives to further the growth of social entrepreneurs through platforms and fellowship programs. Two of them are Red Bull Amaphiko and Red Bull Basement. The former has helped young entrepreneurs grow their businesses and endeavors that aim to address issues within education, health, the environment, and sustainability using development tools and programs to do so. The latter focuses on young creatives involved specifically within the technology sector of these issues, aiding those who seek to also solve social and environmental concerns. These social impact programs exhibit that Red Bull seeks to expand beyond the confines of their drinks and give new generations the opportunities and help they need to change the world, aiming to tackle problems that arise in the social and environmental sectors; this contributes to Red Bull’s sustainable initiatives beyond the products they sell.