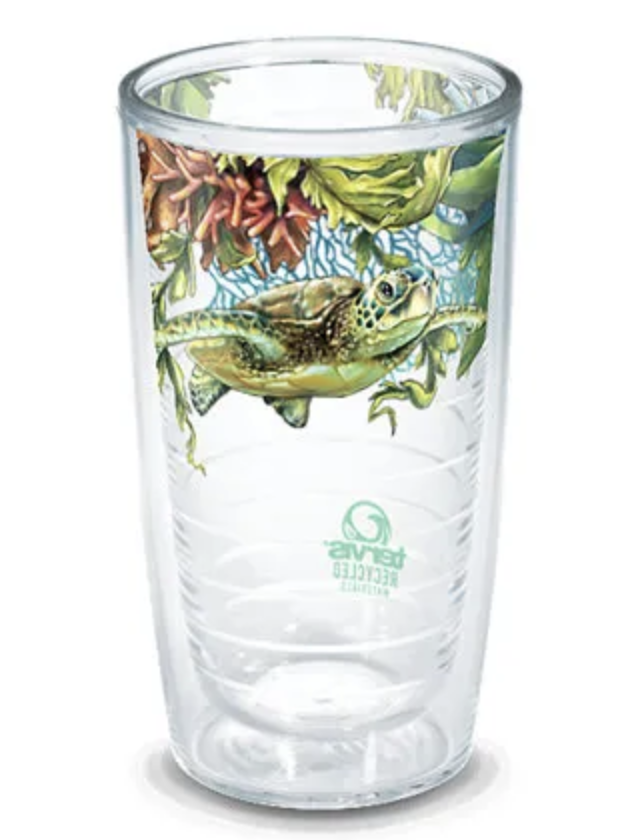 With a myriad of insulated drinkware items on the market, one specific competitor stands out in my mind as being iconic in everyone’s households as I grew up: the Tervis Tumbler. The simple and clear design with the ability to personalize the cups to whatever you want makes this product so desirable and stylish to anyone looking for dishware or reusable drinking items to keep at home or use on the go. The classic 16 oz Tervis Tumbler has always been a staple item in my eyes. While they are a plastic product, I am impressed with their efforts to commit themselves to numerous sustainable practices, donating and contributing to social and environmental organizations who seek to combat current worldwide concerns. They also have a specific collection of their classic tumblers that seek to be the most sustainable on their website like the Recycled Sea Turtle & Coral Tervis Tumbler. They have committed themselves to working with and being supplied from companies that pride themselves on their own sustainable endeavors and have their own ambitious goals to provide the best alternatives to wasteful products and decisions. Tervis Tumbler has aimed to decrease their waste, change their production practices, and work towards being the most sustainable brand they can be. The company was founded on the principle of caring for the environment with the production of a reusable product, and they continue to hold themselves to high standards and ensure they are evolving their practices as their mission and values become more important and relevant into the future.

All of the classic Tervis Tumblers are made from BPA-free Eastman Tritan Plastic, after making the switch to excluding bisphenol A (BPA) from their materials in 2011, changing their material to a new generation of polymer. BPA is a chemical that is used to make strong, resilient plastic material and has been known to leach into our food and water, capable of causing negative health side effects such as reproductive, neurological, and immunity problems. While its effects generally remain controversial and debatable, by subtracting BPA from the ingredients of the Tervis Tumblers, there is no hesitation about possible problems for the customer. Tritan plastic is GREENGUARD Indoor Air Quality Certified, meaning it meets a number of strict standards of low emission levels like from VOCs to maintain proper indoor air quality. Eastman is also a Responsible Care company, meaning they are a chemical company who strives to provide sustainable solutions to their production practices. Tervis’ sustainable products use at least 50% recycled plastics in the cup like the Recycled Sea Turtle and Coral cup. While it is not inherently sustainable to produce plastic because of the negative effects from the extraction to the production to the waste disposal, Eastman claims on their website that they aim to reduce their greenhouse gas (GHG) emissions by one-third by 2030 and later achieve carbon neutrality by 2050, meaning they strive to be better and achieve a more sustainable mission than in the past. While this claim might be promising, they do not explicitly detail all of the steps they will take to reach this goal, and seeing as it is such a long time from now, it can almost be seen as a promise to consumers to keep them satisfied and claim work is being done even if it isn’t. Besides the plastic used to make the cup, if there are any bits of plastic that do not meet Tervis’ quality standards, they are reground at their site and reused so there is not more waste produced. The patch found on the inside of the cup is made from 100% recycled thread. Any decorations on the cup are made from Plant Based Inks that are eco-friendly and reduce the amount of plastic being distributed in the world.

Tervis Tumblers are made by ultrasonic welding the double-wall insulated cups into their final form. In their facility, there are 100% compostable utensils and Coke Freestyle machines for employees to obtain beverages from instead of supplying single-use bottles. Their production processes are also evolving over time as Tervis has a goal to be a Zero Waste landfill facility by the end of 2022. Instead of sending any waste to a landfill that they produce when creating their products, they will reduce, reuse, or recycle all of the waste that is generated at their factory in Venice, Florida. Products can even be returned to them to be broken down and reused as new products such as benches, flower pots, recycled tumblers, and more that are donated to parks and schools. Instead of using plastic packaging for their products, they use kraft paper which is 100% eco-friendly and quickly biodegrades within a few weeks. They also reuse their packaging in conjunction with their suppliers, reaching an 84% recycle rate and on track to increase to 100% by the end of 2022. Tervis Tumbler shows clear efforts to better themselves and their practices by not only integrating sustainability into their products but into their facilities and production practices as well. While pledges may sometimes seem like false promises, the way Tervis Tumbler has followed through in their other decisions gives me hope that they can meet their goals with ease.

Founded in 1946 by Frank Cotter and G. Howlett Davis, Tervis Tumbler has expanded their company to produce not only tumblers but water bottles, mugs, wine glasses, sippy cups, and more. They have partnered with clothing company prAna in their Responsible Packaging Movement, where they have committed to eliminate single-use plastic and virgin forest fibers from all packaging along with any excess waste from packaging in their supply chain. Based in South Florida, they have also partnered with Florida-based marine research labs, aimed to recycle all of their products into a plethora of post consumer products, and facilitated numerous company-wide beach cleanups like when they partnered with 4ocean to clean beaches in Siesta Key, Florida in 2019. They have also joined FORCE BLUE along with a number of other partners to fund #100yardsofhope, a year long coral reef restoration project in Miami’s waters put on by FORCE BLUE. Tervis Tumbler is also partnered with a multitude of like-minded companies that they either donate to for sustainability research purposes or they are companies that have similar goals and they have joined together to provide sustainable products for their customers; some of these companies are prAna, The Florida Aquarium, FORCE BLUE, Final Straw, Guy Harvey, Life is Good, and more.