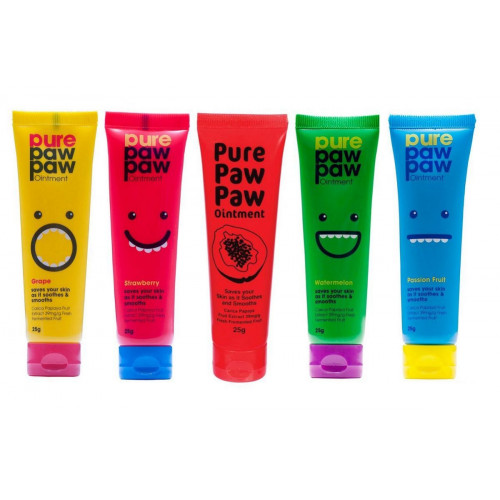 Overall, it seems that Pure Paw Paw have good intentions, or at least want to appear this way. They state that they value natural ingredients and transparency. However, with petrolatum as the main ingredient, and little to no transparency about the supply chain, production processes and labour practices, it is difficult to call this product sustainable. I would suggest using other products with natural ingredients and more information about their business.

The main ingredient of this ointment is petrolatum, which is derived from petroleum and is a byproduct of the oil refining process. It has been widely adopting for many uses, such as helping with minor injuries and moisturizing, as it seal the skin with a water-protective barrier, which helps it to retain moisture. However, in addition to its origin from an unsustainable industry, it often contains Mineral Oil Aromatic Hydrocarbons (MOHA) and polyaromatics, which may be carcinogenic.

The next ingredient, papaya extract, is difficult to assess. There are general efforts to implement sustainable farming practices in Australia, such as Horticulture Sustainability Framework, under which papaya farming falls. However, as there is no transparency about the source of the papaya extract used in the Pure Paw Paw Ointment, it is impossible to say how sustainable it is specifically for this product. Although, organic materials are generally better than inorganic ones.
Cera alba, or beeswax, is often used in cosmetics. Beeswax is extracted with honey, as it is the material the honey is stored in. Generally, industrial-scale honey and beeswax production is harmful for the bees and can lead to a decline in their population, which is extremely damaging for ecosystems. Furthermore, there is an ethical dilemma about the use of the bee’s labour and lives for profit.

As there is no information on the source or nature of the ‘flavour’, it is impossible to assess the impact or safety of this ingredient.

It is packaged in a plastic lip balm tube, which is an unsustainable material and can be difficult to recycle. The packaging does not have a label for the type of plastic it is, which is crucial for recycling. Moreover, three-dimensional things, like lip balm tubes, are too small to recycle if all three dimensions measure less than three inches.

They claim that none of their products or ingredients are tested on animals, which is good from the standpoint of ethics, but they do not have any certifications to confirm this. Moreover, they still use animal exploitation products in their ingredients.

The papaya used in this ointment is locally-grown – it is grown in north Queensland, and is fermented by Pure Paw Paw’s team. There are no details on the process of fermentation.

There is very little to no information about the sourcing of other ingredients and materials. This is problematic, because the consumer has no way of knowing how the product is made, and any claims about the sustainability of the product have no solid proof. Transparency is extremely important, as it allows to assess how well the company is doing in terms of their environmental impact, and also treating its employees and employees of their supply chain fairly. Generally, consumers will not want to support a product produced through unethical practices, thus, it is in the company’s interest to disclose details about the production process, unless they want to hide something they know the consumers will not like.

Pure Paw Paw is owned by Core Metrics, an Australian company which was started by Sally and Ray Desantic, and, later, their daughter joined them as the head of marketing. The company has considerably grown in size and now it is a global brand with worldwide distribution and an Asia-Pacific office in China. On their website, they claim that their staff are ‘treated as extended family too’, and that transparency and honesty are their main values. However, is this really the case? There is almost no transparency about the supply chain, the production processes and labour practices.