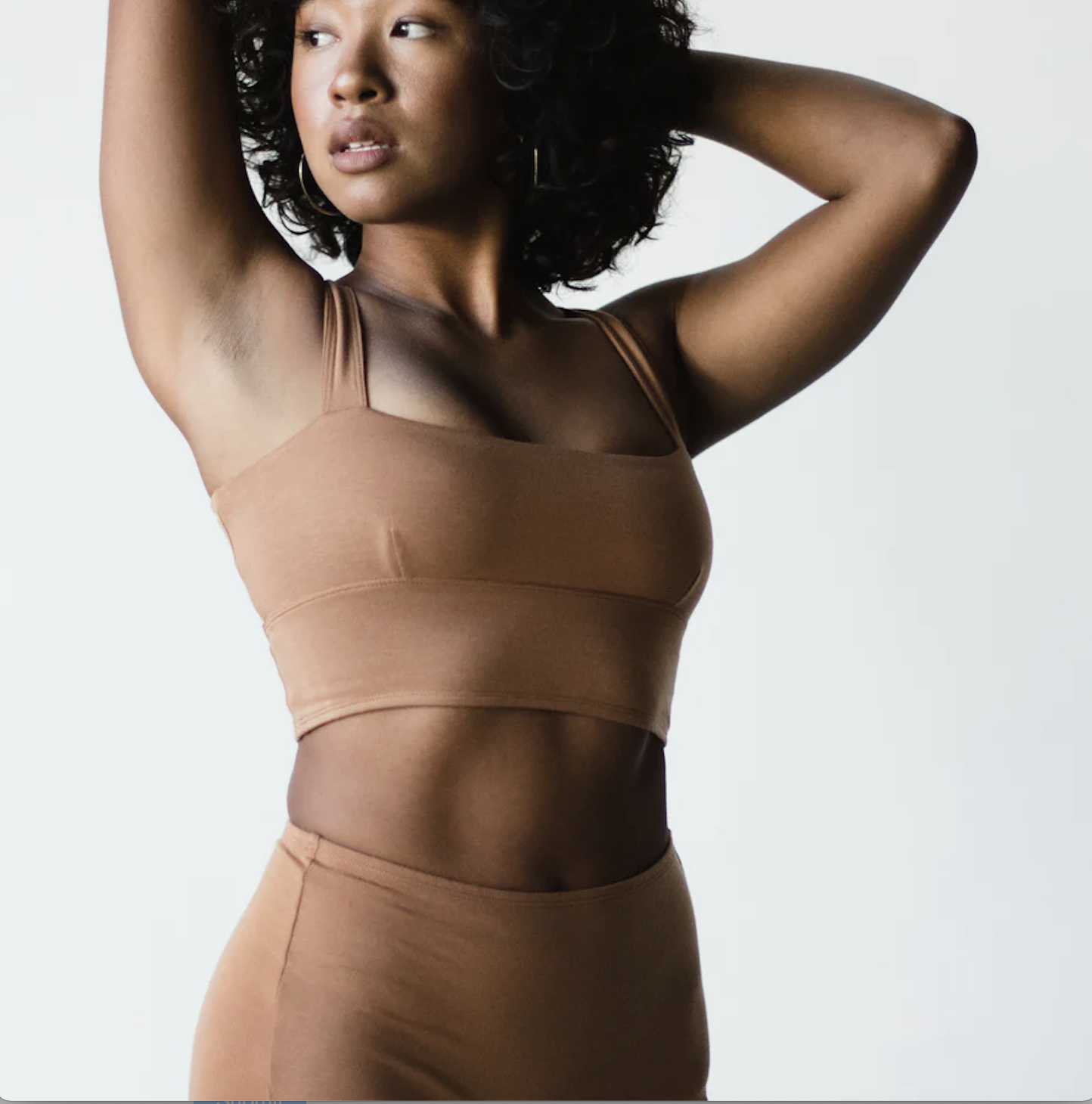 Proclaim’s bralette comes from the right intentions–representing all women and becoming more environmentally conscious–but lacks in the execution of doing more and saying more.

As an LA-based lingerie brand, Proclaim aims to expand the definition of nude by not only representing all women but also using earth-conscious fabrics. Although Proclaim has set initiatives for sustainable fabrics, packaging, and production, I feel that this is only a level above the bare minimum. This square neck bralette top is definitely a more sustainable choice when compared to those from fast fashion brands but Proclaim still needs to reevaluate its fabric composition and improve their transparency.

What gives this bralette its soft, silhouette-hugging look is its fabric composition of 90% Tencel™ Lyocell and 10% Spandex. As a plant-derived fiber, Tencel™ Lyocell is first extracted from sustainably grown wood and then processed through a closed loop system that turns wood pulp into cellulosic fibers. By recycling water, using renewable resources, and reusing materials, this fabric minimizes water and energy consumption while still giving this top durability, gentleness on the skin, and breathability. Tencel™ Lyocell is also biodegradable and compostable, which reverts it back to its origin–nature–instead of polluting our land, water, and air.

On the other hand, Spandex comes from petroleum, a fossil fuel that is notorious for its contribution to oil spills, loss of land and water habitats, and carbon emissions. Like its origin, its production process is as toxic with harmful chemicals that put manufacturers and workers at risk. Exposure to chemicals such as polyurethane damages several organs such as kidneys, livers, bone marrow, and even brains. The harm that these chemicals cause don’t just stop at production. When processed into clothing, Spandex irritates the skin and often causes rashes, dermatitis, and allergic reactions. It’s also nonbiodegradable, contaminating land and water with chemical residue and microplastics.

Although Tencel™ Lyocell is a sustainable fabric, converging it with Spandex can still result in the pollution of harmful chemicals and waste. However, Spandex only makes up a ninth of the whole bralette, which is much less than an average body-hugging top. This bralette is also available in three shades of nude, but Proclaim doesn’t go into what dyes they use in production, which could mean that more harmful substances are being used and released. Using Tencel™ Lyocell is definitely a step toward creating clothes that last, but in order for this bralette to be truly sustainable, Proclaim should consider lessening, if not removing, the amount of Spandex in its composition and provide information on what dyes are being used.

Believing that less is more, Proclaim packages this bralette “with love.” Made in the USA, their poly mailers, wrappers, and hang tags are made of 100% recyclable materials and are also 100% recycled. The poly mailers even have dual adhesive strips so you can reuse them! Their label fasteners are also plastic-free. Instead, they’re made of natural hemp fibers that are biodegradable.

As mentioned above, the Tencel™ Lyocell fabric that this top is composed of also uses renewable resources, reuses production materials, and recycles water. Overall, this closed loop system creates much less waste and pollution as compared to the processes involved in using synthetic fibers such as polyester.

Although these initiatives have the right intentions behind them, I can’t help but feel like there’s still a lot missing. What exactly are the recyclable materials are used? What impact does using dual adhesive strips make? How much waste is diverted thanks to natural hemp label fasteners? What about transportation? Is Proclaim taking action to lessen the greenhouse gas emissions from their supply chain and shipping to customers? There’s also no information on the production processes on how they make their clothing and choose suppliers either. The brand also lacks goals on what they’re planning to do to improve and lessen their carbon footprint.

Without these crucial insights into their entire supply chain, Proclaim still needs to do more and provide tangible numbers to show their impact beyond just packaging.

As an LA-based brand, Proclaim has stationed their headquarters in LA. They’ve stated that their garments are “ethically made” in a facility that meets LA and California’s labor standards. This includes paying men and women fair hourly wages. However, this is all the information that Proclaim shares. They haven’t released a Code of Conduct that defines what they believe to be protecting labor rights. They also don’t delve deeper into any other labor standards such as working hours, incentives, and equal treatment aside from fair wages.

There’s also a lack of information on what facility they use and whether they make their clothes themselves or use suppliers. They could improve on their transparency in tracing where their clothes come from and how they ensure that these factories are truly safe and compliant with regulations. From what I’ve seen so far, there’s not much evidence that really shows their commitment; adding an “ethically made” section on their site is only the bare minimum.

Where they lack in transparency for workers, Proclaim stands out in their mission of inclusivity–whether for different body types, skin tones, or races. It’s clear with their products and the models they’ve chosen that they truly celebrate all women. With their other garments, Proclaim uses a variety of sustainable fabrics such as organic cotton, recycled polyester, and curpo. However, I’d like to see more from them. I think that it’s important to have a vision of how they want to build a more sustainable world and what they plan to do to achieve them. Right now, there are no tangible numbers or specific information that reflects the impact of using the fabrics that they’ve chosen, their packaging, and even being made in LA.