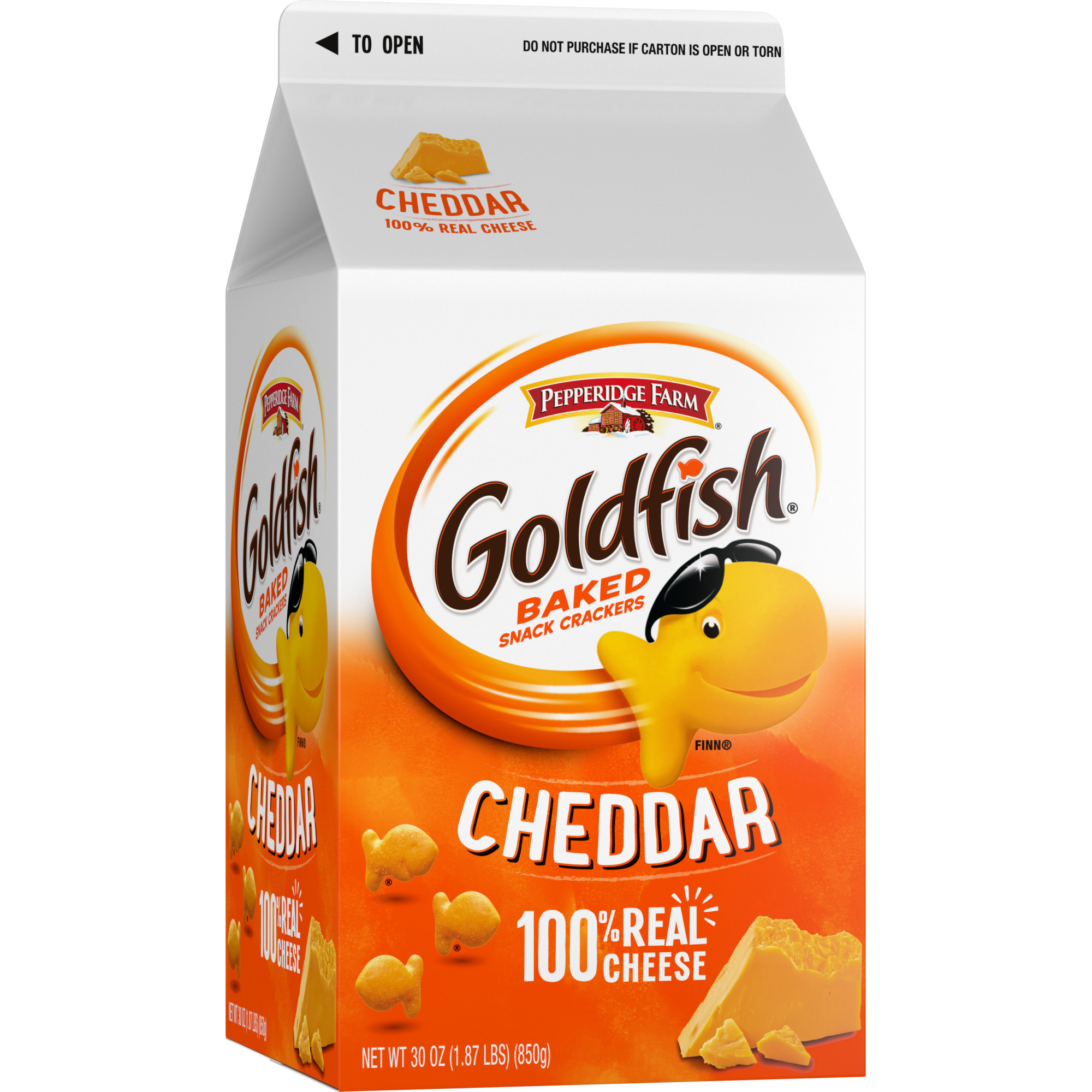 Pepperidge Farm’s Cheddar Goldfish, the snack that smiles back, has become a staple and beloved snack in many people’s lives. Pepperidge Farm was founded by Margaret Rudkin in 1937 with an emphasis on food quality, a tradition that still continues today within the company. In 1961, Margaret sold Pepperidge Farm to Campbell’s Soup, another family-run food company. Overall, I was disappointed with the sustainability of this product. Pepperidge Farm was not very transparent with the sources of the ingredients, which also made it hard to determine the labor practices throughout the company. A lot of their sustainability goals related to manufacturing and switching to renewable energy seemed very performative, and not as ambitious as they need to be. Their human rights efforts also seem to be very performative since they only really achieve the bare minimum, which, to me, shows that these companies don’t actually care about many of their so-called “values.” In the future, Pepperidge Farm and Campbell’s will need more transparency and ambitious goals if they want to boost their rating.

In addition to being made with smiles, Pepperidge Farm’s Cheddar Goldfish are also made using enriched wheat flour, cheddar cheese, vegetable oils (canola, sunflower, and/or soybean), salt, yeast, sugar, autolyzed yeast extract, paprika, spices, celery, onion powder, monocalcium phosphate, and baking soda. Flour has a low carbon and water footprint; however, wheat production for flour can use large amounts of fertilizer and energy. This fertilizer degrades into the soil, releasing nitrous oxide gas, which is another greenhouse gas that causes warming in the atmosphere. In 2017, Campbell’s, Pepperidge Farm’s parent company, launched a sustainable wheat program creating partnerships to measure and track farm-level sustainability in the regions where they source wheat for their snacks, including their Goldfish. In 2020, 19% of their wheat supply was enrolled in their corporate sustainability program, and they’ve set the goal to sustainably source 50% of their wheat ingredients by 2025. While this is a positive achievement and a good start, it would be even better if they were more ambitious and sustainably sourced 100% of their wheat ingredients in the near future, rather than just 50%. They don’t say anything about how they make their cheddar cheese or where they source their milk to make it, but, in general, dairy farming and cow’s milk has significant effects on the environment. Cow’s milk requires lots of land and produces large amounts of carbon. Dairy cows contribute to greenhouse gas emissions through their release of methane and manure, which can be degrading to the atmosphere and waterways. Dairy cows also require twice as much water as dry cows, which depletes freshwater sources. Therefore, cheddar cheese, which is derived from cow’s milk, is an unsustainable ingredient. Pepperidge Farm confirms that the vegetable oil used in their Goldfish uses GMOs. Crops that are genetically modified are more likely to also be treated with glyphosate, which is an herbicide that harms the environment and wildlife. Therefore, the vegetable oil used in Goldfish is unsustainable. It is likely that the salt used in Goldfish is produced through solution mining, which involves digging a well into an underground salt deposit and using lots of water, making it an unsustainable ingredient. Yeast has a low water and carbon footprint, and its production does not have any significantly damaging effects on the environment, making it a sustainable ingredient. Campbell’s says that the sugar they use in their products is grown mainly in the Caribbean and processed in Canada. Transporting the sugar between these two places probably requires lots of energy, producing large amounts of greenhouse gases. Additionally, sugarcane production has harmful effects on the environment. Fertilizer runoff from sugarcane farms often pollutes freshwater ecosystems and harms the organisms living within these ecosystems. Sugarcane farming also uses large amounts of water and fuels deforestation, making it an extremely unsustainable ingredient. It is hard to judge the sustainability of the paprika used in Goldfish without knowing its source; however, paprika traditionally has a high water footprint, but a low carbon footprint and no significant damage to the environment. Spices is a very generic term, and more transparency will be needed about what these spices include and their sources in order to accurately determine their sustainability. Celery is a sustainable ingredient since it has low water and carbon footprints and does not significantly damage the environment. Onion powder, which is made from dehydrated onions, is a sustainable ingredient since it has low water and carbon footprints and poses no significant threats to the environment. Monocalcium phosphate is used to help food rise when baked and is made by reacting calcium with phosphoric acid. Phosphate rocks need to be mined, refined, and purified, which seems like a process that would require large amounts of energy and resources, making it unsustainable. Baking soda is made through the extraction of minerals through mining, which is energy intensive and requires large amounts of water. These mining operations can also threaten biodiversity and wildlife habitats, making baking soda an unsustainable ingredient. Most of the ingredients in Pepperidge Farm’s Cheddar Goldfish are unsustainable and there is a major lack of transparency in where they source many of their ingredients. Additionally, while I appreciate their efforts to sustainably source their wheat, they still have a long way to go in order to achieve full sustainability.

Producing Pepperidge Farm’s Cheddar Goldfish uses large amounts of manufacturing and machinery, which requires large amounts of energy. Campbell’s and Pepperidge Farm both mention specific projects switching to renewables in certain factories. For example, a Pepperidge Farm bakery in Connecticut generates enough renewable energy from solar power to cover almost 100% of its usage. Campbell’s also mentions a solar array at their world headquarters that generates 20% of the campus’s electricity demand. However, this is a very small number, and I would expect much more from the company. Additionally, these examples of switching to renewables are minimal, and it is hard to find information on how the companies plan on switching to renewables as a whole. The only thing that I was able to find was a goal they had set in 2010, stating that they were committed to sourcing 40% of their electricity from renewable sources by 2020. However, they only achieved 10%, illustrating their lack of dedication to achieving this goal. This is the last goal about switching to renewables that I was able to find, which shows that Pepperidge Farm and Campbell’s don’t actually care about climate action and sustainability, and it’s mostly for show. Additionally, the cartons that these Goldfish are packaged in are not recyclable since they have a foil-like lining inside them. However, Campbell’s has set a goal to transitioning 100% of their packaging to recyclable or industrially compostable materials and designs by 2030. Based on their track record, their devotion to this goal does not seem likely. As consumers, it is important that we hold companies like Pepperidge Farms and Campbell’s accountable by demanding more transparency and ambitious sustainability goals in order to work towards a more equitable future.

Pepperidge Farm and Campbell’s lack transparency when it comes to the sources of their ingredients, making it hard to determine what the treatment of their workers is like. They do mention that they are trying to strengthen farmer livelihoods by supporting innovations that enhance soil health, yields, and resiliency. However, the steps that they are taking to improve farmer livelihoods is extremely vague, making this goal seem performative. Campbell’s also says that they ensure ethical and sustainable practices in their supply chain, and that they value responsible sourcing, traceability, supplier diversity, and human rights. However, from researching the ingredients in Goldfish, they aren’t very transparent with traceability. Additionally, they don’t provide much evidence or transparency outside of this generic statement that supports these values. They mention that they have donated $1.5 million over three years to nonprofit organizations that raise awareness, advance education, and fight racism and discrimination. However, when you break it down, this is only $500,000 a year, which is not a lot for a company this large. Campbell’s also notes that they don’t employ child or forced labor, including prison, bonded, or indentured labor. They also say that they will take effective steps needed to prevent health and safety incidents and occupational injury. However, they do not provide any information further than this, such as what these steps are. The only thing that they mention in this regard is a goal to achieve a 3% decrease in reportable and lost time incidents per year, with a long-term goal of 0 incidents. This goal does not seem very ambitious, and I would expect a higher percent decrease. Many of the goals related to human rights set by Campbell seem to be very performative since they only do the bare minimum, if that. If Pepperidge Farm and Campbell want to boost their rating, they will need to be much more transparent and ambitious with their goals in the future.