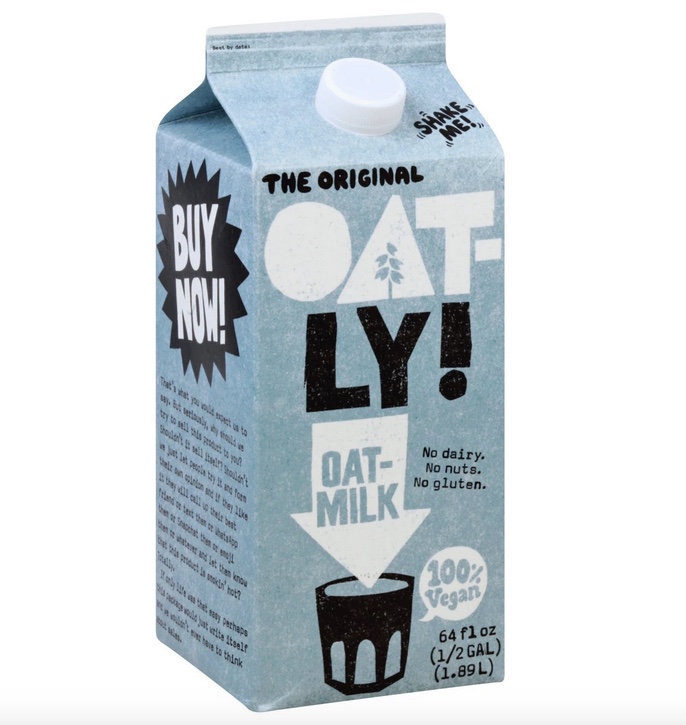 Oatly is the world’s original and largest oat drink company. The company originated in Sweden and is now very popular, often out of stock in grocery stores in the US. They originally sold their products only in Europe but then expanded to the US. The company produces oat milk; oatmilk based ice cream, yogurt, and soft serve; as well as apparel, all of which are plant based.
I was impressed with my initial research on Oatly; the company states that their “goal is to always deliver products that have a maximum nutritional value and minimal environmental impact.” While this is a broad statement and many companies have stated similar claims, Oatly does a great job of outlining exactly how they are doing so on their website. Consuming oat-based products is very environmental as the dairy industry is one of the heaviest emitters of CO2. Half a gallon of Oatly Oat Milk retails for around $5 while a full gallon of cow’s milk retails for around $4. While ideally some day oat milk will be as affordable as cow’s milk, I strongly believe that if one can afford to consume oat milk they should, given how harmful the dairy industry is.
With this being said, I discovered upon further research that Oatly may not be as ethical as they claim to be. I was disappointed to discover that the company is rather controversial; they faced a lawsuit for being dishonest with their claims to sustainable practices on their website, one of their major investors contributes to deforestation, and they attempted to sue a smaller independent oat milk brand. This is very frustrating as a consumer because it reveals how easily companies can lie about their practices. I still believe that supporting Oatly is better than supporting the dairy industry. However, I am thoroughly disappointed with Oatly’s dishonesty.

Oatly states exactly where each of their products is sourced from on their website. While I would usually admire this kind of transparency, Oatly’s lawsuit makes me question how hones they are being about sourcing ingreadients.
The oats in the Original Oatmilk are grown in the US and Canada and supplied by a company called Grain Millers. The rest of the ingredients are sourced in the US and Canada except for Dipotassium Phosphate, which is sourced from France.
Oats are a great primary ingredient - they are quite food allergy friendly and the crop is great for soil regeneration. This is a sustainable alternative to dairy. Oatly funded the Oats for Oatly program; designed to test cost-sharing incentives and market opportunities for farms in the Midwest of the US - including their oat supplier - to incorporate oats and cover crops into their rotations. Doing so is great for the environment as it improves the land and reduces disastrous runoff. This project is still expanding to include more farms and by 2029 Oatly is aiming for 100% of their oat supply to be sourced in a regenerative way. This is a wonderful alternative to dairy products; the dairy industry simply is not sustainable.
I really hope that Oatly is being honest about the ingredients in their products. If they are, then this is a really great product.

Nutrition scientists at Lund University in Sweden invented the process of making oat milk. After the oats are farmed and transported to the factory, they are milled, enzymes are added, they undergo a separation process, some other ingredients are added for flavor and nutritional value, the product is treated with heat to extend its shelf life, and the product is then homogenized, packaged, and shipped out. Oatly’s website is very honest about the CO2 emitted throughout the production process as well as the steps they are taking to reduce these emissions.
The overall company climate impact is 167,000 metric tons of CO2 emissions. I really appreciated this transparency and I hope it is the truth. Most companies do not disclose their CO2 emmissions so clearly.
Oatly’s website also addresses exactly how much water they are using in their production process – the sustainability report on their website names their specific production locations and exactly how much water is being used. The water usage has gone down in the last year and Oatly aims to continue to reduce it.
At first, I was thrilled with how much easily accessible information there was on Oatly’s production process. I have not found a company that is nearly as honest. The information is mostly included in the sustainability report that is linked on their website. However, after finding out about the lawsuit I grew skeptical off all of the information provided in the sustainability report. It shows how easily companies can just provide false numbers and statistics to their consumers. With that being said, I’m glad the company got called out for it with the lawsuit.

At first, I was under the impression that Oatly was a really great company. A large fraction of their website is dedicated to the initiatives they are partnered with and the action that they have taken as a company to promote sustainability and transition consumers away from dairy products.
I was very impressed with the initiatives that Oatly is partnered with. For example, they are partnered with an initiative that helps queer people of color travel safely and an initiative for a board game based on climate change and the various challenges of stopping global warming.
The company also funds their own initiatives including the Ditch Milk campaign – Oatly put up billboards and advertisements throughout Sweden, England and the Netherlands in protest of the dairy industry and in promotion of oat milk as an alternative. The campaign raised awareness of the climate impact of dairy and started a lot of important discussions and debates. Oatly also was involved in stopping amendment 171 – a proposal in European parliament to prohibit the use of dairy-related language, packaging, and imagery for plant based products. These are only two examples of great things the company is doing.
Oatly included a company diversity report in their sustainability report. I was very pleased that they included this, as diversity is crucial to a progressive and sustainable company.
Finally, Oatly’s sustainability report included a section with their goals for the future and how they will continue to combat global warming. They focus on three pillars of action- driving a food system shift, setting the example as a future company, and empowering a plant-based revolution – the sustainability report includes more specific steps the company plans to take. Though some of this wording is a little bit floral and could potentially be minor green washing, this is the first company that I have researched that directly addresses climate change. More companies need to address the state of the planet and act with much more urgency, otherwise no changes will be made.
With all of that being said, Oatly has recently faced serious controversy because one of their latest investors is the company Blackstone Growth. This company has investments in two firms that are directly contributing to deforestation in the Amazon. Oatly defended themselves saying the company is “definitely not destroying forests” and continues to aim for sustainable products. However, their ties to Blackstone are definitely very questionable.
Oatly also faced a class action lawsuit on behalf of investors who purchased shares between May 20, 2021 and July 15, 2021. They were sued for making false and/or misleading statements and overstating their margins, revenue, capital expenditure, and market share financial metrics in addition to overstating their sustainability practices and impact. I was very upset upon learning this. It is very misleading to consumers that Oatly would release so much “transparent” information and have it be untrue or exaggerated.
Oatly also attempted to sue a smaller, independently owned Oat Milk company called PureOaty, saying that their company name and product are too similar to Oatly’s. The lawsuit was unsuccessful; the judge ruled that the similarity was not strong enough and that there was no indication that PureOaty was trying to imitate Oatly. I am disappointed that Oatly is not supportive of smaller companies and could perhaps be trying to hold a monopoly over the Oat Milk industry.
I am still unsure of how to feel about Oatly. I don’t believe that everything stated on their website is false information; I’m sure at least some of the work for sustainability that they claim to be doing is true. However, I think it is really not fair of them to be dishonest in this way. I will still choose to support oat milk brands over dairy brands. However, I will likely try to find a brand with less controversy than Oatly.