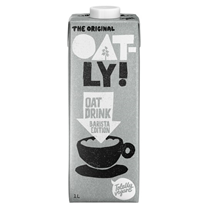 The Oatly Oat Drink: Barista Edition is a wildly popular milk alternative across the world. It’s used at countless cafés and coffee shops, including over 6000 Starbucks locations, due to its ability to foam like cow’s milk. The product is also widely consumed by non-baristas due to its rich taste and texture. Oatly is an oat-based dairy alternative company headquartered in Sweden. Due to the explosion of vegan milk alternatives over the past few years, Oatly has had a surge in demand. In 2020, they produced 299 million liters of milk alternatives, “oatgurts”, and ice creams. This is an 81% increase from 2019. The company advertises sustainability quite a bit, and accordingly has a 20-page sustainability report from this past year. In their 2019 report, they clearly outline the UN Sustainability Development Goals they’re working towards, indicating a solid understanding of their responsibility facing the climate crisis. However, for all their talk about sustainability, their response to a rapid growth rate over the past two years is less than ideal for the climate crisis.

The ingredients in the Oatly Oat Drink: Barista Edition are oats, rapeseed oil, dipotassium phosphate, calcium carbonate, salt, vitamins (D2, riboflavin, B12), and potassium iodide. The dipotassium iodide functions as an acidity regulator. This buffer is added into the barista blend as coffee’s low pH (highly acidic nature) may cause the precipitation of the plant-based milk. None of the listed ingredients have a significant impact on the environment. However, cultivation of ingredients still makes up for 35% of Oatly’s total emissions. In better news, the climate impact of the ingredients went down 17%. Oatly did this by only sourcing oats from low impact countries such as Canada and Sweden.

Oatly is making efforts to save water at all three of their production sites in Millville, New Jersey, USA; Landskrona, Sweden; and Vlissingen, Netherlands. Their water usage decreased at all three of their sites over the past year. At the Millville site in New Jersey, a closed-loop barrier fluid unit was introduced. In this system, water can be recycled and losses are negligible. According to Oatly’s Sustainability Report, workers at Landskrona were more efficient and mindful with water planning, resulting in less water losses. They also reported that 100% of their leftovers were repurposed. This was achieved by effective recycling: in all sites, the insoluble oat fibers left behind in the separation process were turned into either animal feed, biogas (a renewable energy source), or soil improver. However, Oatly’s transport costs are a severe detriment to their sustainable image. While they use electric trucks to deliver products in Sweden, saving 400 metric tons of CO2 emissions per year, their decision to open up markets in Asia before installing production there has contributed to massive transport emissions. Transport makes up 37% of their greenhouse gas emissions. This is a 13% increase from 2019. Perhaps they should have built factories there before expanding their sales. There are factories being built in Singapore and China, but the damage on the planet is impossible to remediate.

Oatly reported that 77% of their employees felt included and respected at work. The total employee population is about 50% women and 50% men, but only 33% of board members are women. This is worse than 2019, as the split was even then. Oatly also runs a US Oats for Oatly pilot program where they incentivize farmers in the American Midwest to introduce oats and cover crops into their typically corn and soy farm rotations. This crop diversity has a multitude of regional benefits. The crops themselves can reduce the use of nitrogen intensive fertilizers and break up pest cycles. Furthermore, farmers can enter new markets for their additional crops. After a meeting in 2020, Oatly recruited 13 more farmers, contributing to a total 1575 acres of farmland. This is an effective move from Oatly, as it maximizes using existing farmland rather than installing more across the country.

Oatly was founded at Lund University in 1994 by brothers Rickard and Bjorn Oeste while researching for a milk alternative for individuals with lactose intolerance. Since then, it became a publicly traded company and is currently owned by The Blackstone Group, Nativus Company Limited, Verlinvest, Oste Ventures, Gullspang Invest AB, Ostersjostiftelsen, and Bank von Roll AG. Blackstone, owning about 10% of the company, has had its fair share of controversy over the past few years. Steve Schwarzman, Blackstone’s CEO has donated $3 million to Donald Trump’s administration. Funding an administration that pulled out of the United Nations Paris Agreement doesn’t align with Oatly’s sustainable image. For a company with such a strong brand of sustainability, working with a corporation such as Blackstone is counterintuitive. Surely, there are more sustainable corporations willing to work with such a rapidly growing company. Oatly seems to be selling to the highest bidder, who may very well invest newfound money into actions against the fight for climate justice, such as donating to the Trump administration.