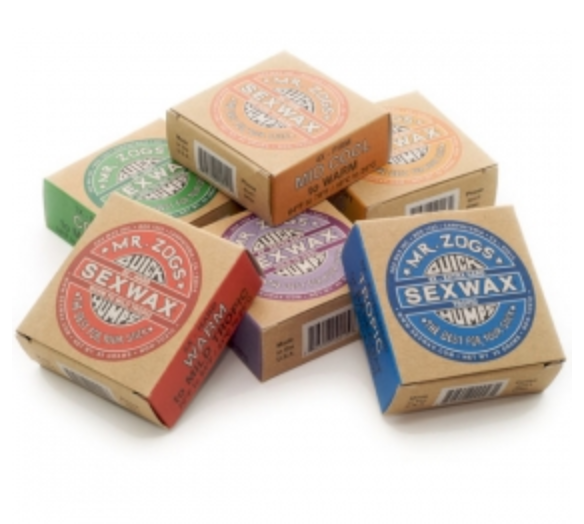 Zog industries is a brand that is embedded into surf culture as well in the surf wax market. They seem to understand that just as much as the consumer and have fallen behind on the sustainability side of things. Paraffin surf wax is highly unsustainable yet Mr. Zogs has shown no initiative to explore sustainable alternatives. Their only tiny move towards sustainability has been to create the Quick Bumps Eco Box line, which is packaged in cardboard instead of plastic. More transparency is needed regarding the supply chain and production methods behind this product, and company in general. I am very disappointed in the lack of effort towards sustainability from a brand whose main customers care deeply about the environment. I hope to see change in the future, but before that, I cannot rate the sustainability of this product highly.

The main ingredient in almost all brands of surf wax is either soy wax or paraffin. Mr. Zogs Sex Wax uses paraffin as a base in the Eco Box. The rest of the ingredients in the wax are classified as a secret formula, like many other surf waxes. Paraffin is made of a mixture of solid straight-chain hydrocarbons. It is a byproduct of the refining process of petroleum, aka crude oil. The fact that it is made of such an unsustainable material is disappointing because this is my surf wax of choice. Not only that, but 95% of the surf wax on the market is made from this material. Although Paraffin is not a sustainable resource, there are still some positives about this material. It is non-toxic, and approved by the FDA for preservative and aesthetic uses in food. Multiple studies have shown that paraffin is biodegradable meaning that it can be fully broken down by living organisms. Paraffin is technically organic in the sense it is made out of carbon molecules but because there is no regulatory agency that enforces or defines what an organic surf wax is, claiming the product to be organic would be greenwashing. This fact is presented on the Mr. Zogs website, as well as a non-organic label for their product. Also, their website explains that the paraffin is harmful to the environment and the oceans. Although the ingredients of this product are highly unsustainable, I appreciate this honesty and the fact they are clear about the effects of their main ingredient. As for the paperboard packaging, it is recyclable and a step in the right direction away from the plastic packaging that envelops their other lines of wax. To conclude this section, I would say the surf wax industry is unsustainable but at the very least Mr. Zogs provides transparency which is nice to see.

Contrary to the materials, Mr. Zogs does not provide much information on how the Quick Humps Surf Wax: Eco Box is produced. The website says that the factory is located in Carpinteria, California and even offers a virtual factory tour. The “factory tour” is a joke poking fun at people around their office and hasn't been updated since the early 2000’s. Although the jokes are funny, it provides no real information about their production process. Common practice in the surf wax industry is to receive the paraffin from a supplier in a solid form. The next step in the production process is to melt the wax down and mix it with any additives. If the melting process reaches high temperatures, the combustion can burn the hydrocarbons in the paraffin and release large amounts of carbon dioxide. Many other surf wax companies take precautions to keep their wax under this threshold temperature but Mr. Zogs provides no information as to whether they do. As for the packaging, Mr. Zogs produces millions of bars per year so I would assume it is machine packaged adding to the carbon footprint of their factory.

The Quick Bumps Eco Box is produced by Zog Industries, also known as Mr. Zogs Sex Wax. It is produced in a factory located in Carpinteria California. From there it shipped to coastal nations across the world. No information is provided on the amount of employees in the factory or about how much of the process is automated. Because the factory is located in the United States especially California, expansive labor laws protect workers. With a $12 minimum wage, required breaks, limited working hours, and proper overtime among the many benefits ensured by law, it can be assumed the workers at this factory are treated fairly. However without any information it is impossible to reach a conclusion of the sustainability of the who in the Eco Box’s production chain.