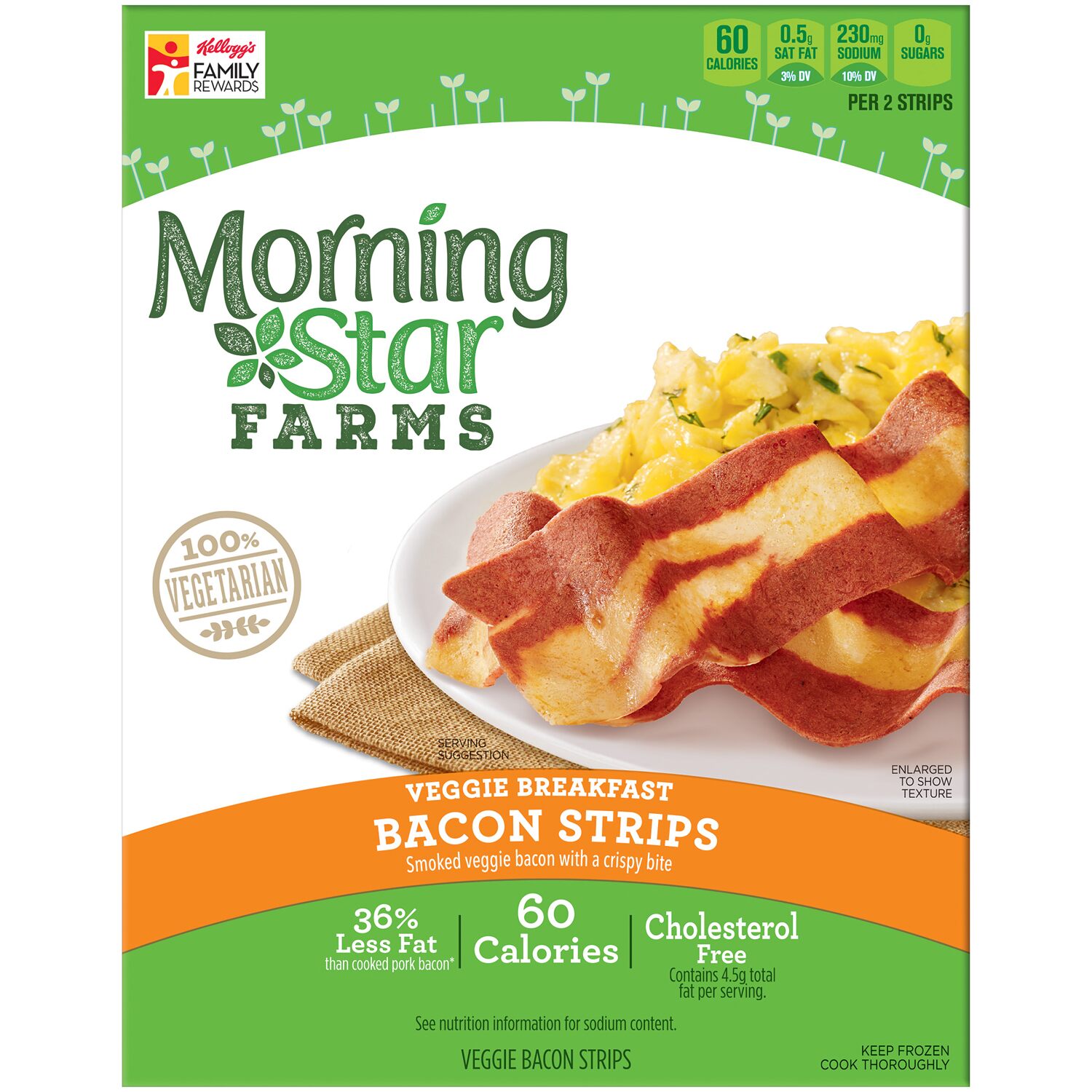 With over 25 meatless products, Morningstar Farms is considered one of the leading pioneers in the plant-based industry. Amassing over $400 million in sales in 2020, the companies ability to grow and expand is ever increasing. As more people are switching to plant-based diets, it's important that the brands they chose from are not only healthy for them but sustainable for the planet. Researching this brand was an insightful experience because it’s a good example of how meatless doesn’t always mean better for the environment and how it’s important for brands to really be considerate of what they’re putting in their product. From my research, I wouldn’t consider this product sustainable and I would recommend consumers to search for a new plant-based bacon before turning to MorningStar.

Branding itself as “Veggie bacon strips with a great smoky flavor”, MorningStar Farms Bacon Strips are a meatless, vegetarian option compared to regular bacon. Priding their product on its low saturated fat and cholesterol content, MorningStar claims that their bacon strips contain “36% less fat than cooked pork bacon. Cooked pork bacon contains 7g total fat per serving (16g). MorningStar Farms® Veggie Bacon Strips contain 4.5g total fat per serving (16g)”. With low saturated fat content, the risk of heart disease, stroke, and other health problems is decreased. Outside of low saturated fats and cholesterol, the primary ingredients include water, soybean oil, modified corn starch, egg whites, soy flour, and wheat gluten. As I continued my research, two of the primary ingredients, soybean oil, and egg whites, caught my attention because they both have large negative impacts on the environment. Soybeans take a lot of pesticides and synthetic fertilizers to be produced, which will end up contaminating local terrestrial and lotic areas including rivers, forests, and lakes. Egg whites have a large water footprint as “391 gallons of water [are] used to produce 1 pound of eggs”. Along with that, animal agriculture, especially of chickens, leads to high amounts of fertilizer and manure runoff that will degrade waterways. Although these bacon strips are plant-based and are considerably better for the environment and animal welfare than pork bacon, they still contain plentiful amounts of toxic, processed ingredients. Wanting to resemble real meat (taste, texture, color, etc.), MorningStar Bacon Strips contain the chemical additives sodium sulfite, sodium tripolyphosphate, and carrageenan (all of which are considered toxic to human health). Banned from use in fruits and vegetables, sodium sulfites are a preservative that can aggravate asthma. Sodium tripolyphosphate can be found in laundry and dishwasher detergents and become toxic when ingested in large amounts. Lastly, Carrageenan’s are currently under fire for being linked to digestive disorders, cancer, and neurological disorders. With so many toxic ingredients to both human health and the environment, the true sustainability of MorningStar’s veggie bacon strips is low.

MorningStar farms produce their products in Battle Creek, Michigan. However, the Kellogg company is investing $43 million to expand a manufacturing plant in Zanesville, Ohio. Alongside this expansion, the company is pledging to transition into 100% plant-based products, removing eggs from their lineup. Despite not much being known about the actual food manufacturers or manufacturing process, from its commitment to less water waste, carbon emission, and land destruction, we can see that their products are at least made concerning the environment and sustainable production. Although a lot of companies tend to make a lot of claims about the sustainability of their product, MorningStar seems committed to them. To evaluate the environmental impact of their products, they use a Comparative Life Cycle Assessment (LCA) of their Plant-Based veggie products. To conduct the LCA, MorningStar contacted the leading sustainability consulting firm, Quantis, using metrics such as carbon footprint, water use, resource consumption, health impact on pollution, and ecosystem quality. The general premise of their review is that “ there is at least 13% less impact on the environment when MSF veggie foods are consumed than a meat product” and “benefits [result] often in the range of 80% or 90% improvement or more across environmental impact metrics for MSF products versus beef, except Resource Consumption at about 60%”. Although in the LCA I found no specific data on veggie strips, looking at their other breakfast products, I found that their production has a usage reduction of 64% in water resources, 58% in carbon emissions, and 78% in land destruction. All of these are compared to meat-containing products. The only downside of production is the use of dairy and grains which “are high contributors to the environmental impact of meatless meals”. I appreciated this transparency in how they evaluated their products and it at least showed some attempt at holding themselves accountable. Ensuring sustainable consumption and production patterns is an important effort in sustainability as it helps minimize waste and emissions and reduces energy consumption. The only downfalls of their product production is the increased chemical additives to mimic the taste and texture of meat and dairy and grain use.

MorningStar Farms is a division of the Kellogg company, meaning that Kellogg is the parent organization and owns MorningStar. Hearing this was alarming because many parent companies can exploit smaller brands. However, comparing and contrasting the relationship between Kellogg and MorningStar, it seems that both companies both share and differ in their values and beliefs. Something I do appreciate is that Kellogg is one of the more sustainable corporations out there, even ranking 3rd among “U.S.-based food & agriculture companies and was named among the top 10 most sustainable food & agriculture companies”. Kellogg even ranked in the top 10% of ESG performers in measures such as environmental, social, and governance quality. The company has focused on SGD goals like zero hunger, gender equality, and climate change with its implementation of conservation agriculture programs and reduced greenhouse gas emissions. From the research I’ve conducted, I feel that Kellogg will stay at a rating of 2 until I see that they’re actively practicing what they preach on all ESG measures. One measure I do think they’re performing inadequately on is social. From a quick search, Kellogg workers have participated in several union strikes because of the company's proposition to “end cost-of-living raises and expand a two-tier pay and benefits system”. Two tier pay and benefits system reward system fosters a work environment of inequality as equal work will no longer ensure equal pay among employees. Along with that, because of the pandemic, many employees have felt the impact of understaffing and being forced to work 16-hour work days without time off. To prevent this in the future, Kelloggs should start implementing more worker friendly initiatives and policies to ensure employee health and safety, both physically and mentally.