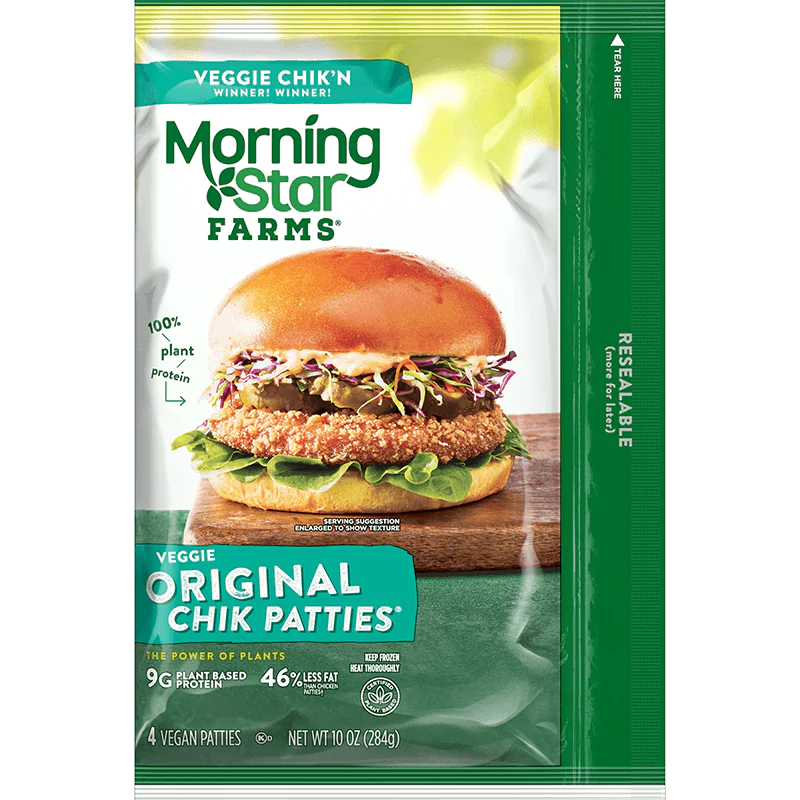 MorningStar Farms with its distinctive green packaging is definitely presenting their Chik Patties as a sustainable alternative to meat products. I know from personal experience that these fake chicken patties are enjoyed by vegetarians and non vegetarians alike, but how sustainable are they really? From my research I am giving them a rating of 1.8 out of 3 planets. The Chik Patties do not contain ingredients that are particularly intense in greenhouse gas emissions or water use. That being said, I wish there was more information available about the sourcing of their ingredients. I also would like to see the incorporation of more organic ingredients in this product. Finally, MorningStar farms is owned by the large food and agricultural company Kellogg’s. At first this threw me off because the relationship between the companies is not immediately obvious. That being said, it seems that Kellogg’s is genuinely trying to become more sustainable and is addressing the UN Sustainable Development goals directly. I would be comfortable purchasing this product, though there may be more sustainable meat alternatives available.

Morning Star Chik Patties are a chicken alternative composed mostly of water, flour, vegetable oils, and soy proteins. Of these ingredients, the two main concerns are vegetable oils and soy proteins. When a food label says “vegetable oils,” the oil used can come from multiple plant sources such as corn, olives, and palm trees. These have varying environmental impacts from deforestation to habitat loss. The production of soy proteins similarly can lead to deforestation if not regulated. That being said, all of these ingredients have relatively low water usage and carbon emission intensities when compared to other food products such as meat and dairy. The patties also contain extremely small amounts of spices, ethylcellulose, dextrose, glutamic acid, citric acid, and potassium chloride. While terms like “ethylcellulose” and “glutamic acid” may sound scary, I am going to try to explain what each ingredient is as well as what its health and environmental implications are. This discussion will be continued into the “How It’s Made” section. Ethylcellulose is a synthetic ingredient derived from plant cellulose. It is completely safe to eat and is approved in the U.S. and the European Union for use in foods and drugs. In foods it is used as a thickener and emulsifier. Dextrose is a naturally occuring simple sugar found in corn. Glutamic acid is simply an amino acid, in other words, a building block of proteins. It is used in food as flavoring. Citric acid can be found naturally but is manufactured to be used in many foods. It is used for flavoring and as a preservative. Finally, potassium chloride is a salt and can be used for flavoring and thickening foods.

There is very little information available about how the raw ingredients on the label are processed to become fake chicken patties. That being said, the production of the separate ingredients can still be analyzed. Unfortunately, this is not a certified organic product, meaning certain environmentally harmful fertilizers, pesticides, and insecticides may be used in the production of the Chik Patties. This would mostly be a concern with the production of the wheat flour, vegetable oil, and soy proteins. As for the manufactured ingredients found in this product such as ethylcellulose and citric acid, they are formed through chemical processes such as fermentation. One environmental impact of this process is it requires energy and land space, but this is no different than in all other areas of food production, so I have not removed planet points for this reason.

MorningStar Farms is owned by Kellogg’s, a food and agriculture company that owns many other brands such as Cheez It and Eggo waffles. Kellogg’s lists multiple sustainability initiatives on their website including protecting biodiversity and reducing greenhouse gas emissions. While I found these general statements to be a little vague, the website does have other pages that explain the company’s concrete progress. They have pages dedicated to how they are reducing water usage intensity and using more recyclable packaging. I also appreciated that on their main sustainability page they have a link to how consumers can recycle their packaging. This is one way they are demonstrating their holistic approach to becoming more sustainable because recyclable packaging makes no difference if it is never recycled! Another positive thing I see on their website is that they directly address the UN Sustainable Development Goals. Kellogg’s is also trying to be socially responsible by partnering with food banks and donating food to people in need. Since 2015 they have fed 195 million people through food donations. I’m impressed by the breadth and depth of their sustainability information on their website, so I’ve given this section an overall rating of 1.8 out of 3. I took off some points because of Kellogg’s use of unsustainable ingredients in some of their other products and their lack of organic food lines.