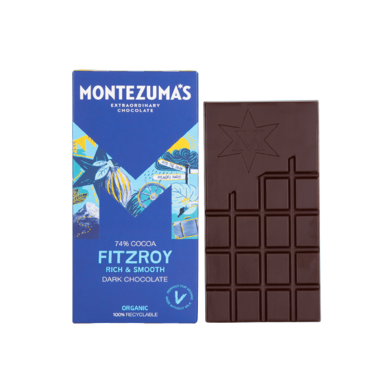 I would definitely recommend this company and product. Montezuma’s is pretty transparent, explaining their sourcing, packaging, carbon footprint, energy and transport usage, waste, suppliers and charity work, and they have little reason to not show off. In this review we’ll look at the first chocolate bar they created, named Fitzroy. Montezuma’s is on the higher price end as a 90g bar costs £2.59 whereas a 200g bar of Dairy Milk costs £1.80. However, this makes sense as it is currently much more expensive to produce chocolate sustainably and responsibly. In future, perhaps a corporation carbon tax would incentivise unsustainable companies to change their practises, while this extra money could subsidise the lower carbon companies thus making their goods cheaper? Anyway, I’m not an economist, so let’s move back to the chocolate.

This bar is made of only four ingredients, all of which are organic and vegan: Cocoa Mass, Cane Sugar, Cocoa Butter, Vanilla Extract. To make their supply chain more sustainable, the cocoa is sourced from multiple regions to mitigate the impact of fluctuating crops; with their organic cocoa coming from Dominican Republic and Peru. They say they don’t buy from regions where slavery, forced labour or deforestation might be occurring. They also say their chocolate meets the stringent ethical and environmental criteria including the Rainforest Alliance, UTZ, Soil Association and Cocoa Horizons certifications, which is genuinely reassuring. They also have a large vegan range with 43 products to choose from! Most of Montezuma’s chocolates are organic meaning that they’re actively promoting biodiversity and protecting the health of people and planet. Montezuma’s stipulates that it will never use palm oil in its products, which is great news. Human exploitation of rainforests for palm oil is immense. It is a major driver of deforestation of some of the most biodiverse forests and habitats of the most endangered species. However, where the sugar and vanilla is sourced is not stated on the website, which is disappointing.

Montezuma was the first chocolate company in the UK to make every single piece of packaging, for all of its products, either recyclable, biodegradable or compostable. Additionally, none of the rubbish produced in store is sent (directly) to landfill. They return their waste to the factory where it’s hand sorted and reused or recycled. Paper and cardboard are compressed on site before being sent for recycling, while other general waste is either recycled or processed for energy recovery. Their waste water, full of nutrients, is transported to local pig farms. They’re also working with suppliers to encourage that they swap out non-recyclable for recyclable packaging. Whilst all this recycling sounds great, we must also be aware that in the UK, thousands of tonnes of our plastic recycling is burnt in incinerators or sent to other countries, which do not have the appropriate recycling facilities, and is then dumped or burned. So, the biodegradable and compostable packing is a huge plus for Montezuma’s.

Montezuma don’t describe the chocolate making process on their website but from previous research I can recount it here. Cocoa pods are harvested manually from Cocoa trees when they’re ripe. The pods are then split open, and the beans are removed, before fermenting in the heat for 5-8 days with stirring. If the climate isn’t warm enough, heated trays are used. The beans must then be dried in the sun for around a week before being transferred into sacks for transportation to a chocolate manufacturer. Here, the beans are cleaned and then roasted depending on the desired effect, before the brittle shells are removed by cracking and filtering the contents with mechanical sieves. Only the nibs are left, which are ground into a paste using grinding stones or heavy steel discs. At this point, 80% of the cocoa butter is separated from the cocoa using a hydraulic press. This can later be reincorporated in certain amounts, along with the other ingredients, depending on the flavour of chocolate being made. In the case of our 74% bar, we know there must be less than 26% cocoa butter. The cane sugar and vanilla extract would now be added and blended with the cocoa liquor. Next, under regulated speeds and temperatures, conching machines knead the chocolate for anywhere between 4-96 hours to allow the flavours to properly combine. Finally, the chocolate is tempered before being poured into moulds.

The energy supply used for this extensive process has been identified as an ‘environmental hotspot’ of a chocolate bar’s life cycle. However, all of the electricity for Montezuma’s offices, factories and stores come from 100% renewable energy sources. Additionally, Montezuma’s have introduced a carbon footprint assessment to determine where they can implement changes to make their company more sustainable. In terms of transport and travel, their employees rarely fly for work and only do when it is business-critical, otherwise video-conferencing is used. Deliveries are conducted fortnightly during the night to avoid congestion and they say in the most fuel-efficient manner they can. They have said they’re working to have a fully traceable supply chain from farm to store but that this is complex. This high level of transparency is what we should expect from all companies as this will help protect the lives of the farmers. On top of all this, Montezuma’s are seeking B-Corp accreditation which requires them to achieve carbon neutrality by 2025 and the highest level of transparency on their environmental impact.

As the ingredients are organic, farmers don’t risk their health from having to handle artificial pesticides and fertilisers, nor is this passed into the environment. The former has been linked to numerous negative health effects, which include those related to neurological, carcinogenic, and reproductive damage. While contamination of water or improper storage of fertilisers have negative health impacts as toxic trace elements in fertilisers include mercury, arsenic, cadmium and lead. The detrimental impacts of these chemicals are felt most strongly by those most highly exposed, such as planters, weeders and harvesters, but the impact is also felt by the wider community as water ways can become contaminated. Commendably, Montezuma’s Fitzroy bar is free from these practises.

Montezuma’s aim to fairly trade, which to them is far more than Fairtrade, which is about fairly trading with just the suppliers. Montezuma’s wanted all of their employees and individuals in their supply chain to be treated well. They only trade with suppliers that meet their ‘Trading Fairly Policy’ and ensure that the suppliers meet strict criteria from Rainforest Alliance, UTZ, Soil Association and Cocoa Horizons. The Cocoa Horizons certification is an independent, non-profit that aims to improve cocoa farmer prosperity by building self-sustaining farming communities that protect nature and children. Their mission and activities support 7 of the sustainable development goals. Cocoa Horizons is recognised by the Sustainability Standards Map, which is a resource that provides “comprehensive, verified and transparent information on over 260 standards for environmental protection, worker and labour rights, economic development, quality and business ethics”.

Montezuma’s prides themselves in the way they treat their employees. They pay over the National Living Wage and undertake a quarterly review to improve employee happiness and mental health. They also have diversity champions to increase diversity in their business. As Montezuma’s is only a small company, they aren’t legally required to calculate the gender pay gap. But they did anyway in 2018, and found it was -2.4% meaning women were paid slightly more than men; this is attributed to more than half of the executive team being female. In the rest of the UK in 2018, the gender pay gap was 16.3%, in the US it was 18.9%. So congrats Montezuma’s for doing a whole lot better.

Their overall mantra is that the production of chocolate should improve the industry and the lives of the farmers and workers, minimise negative impact on the environment and should not be concentrated on profit. I believe this product to be a worthy investment!