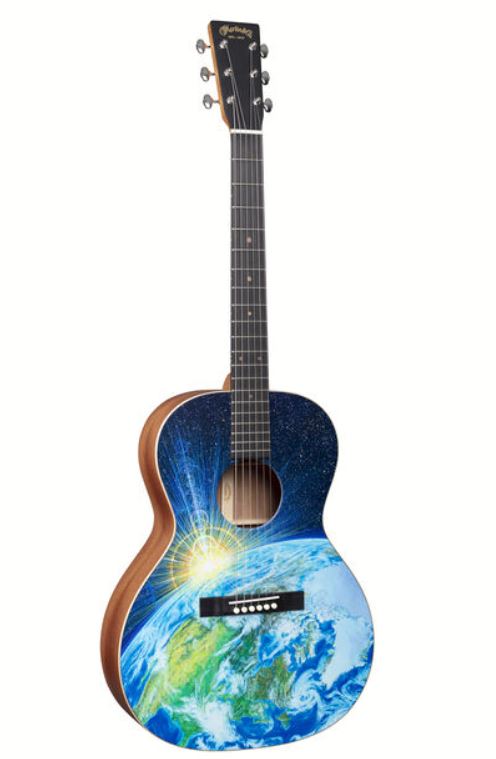 With overconsumption of resources becoming an issue in almost all areas of production, guitars are no exception in their overuse of natural resources leading to problems in their supply chain. As more and more people become interested in playing the guitar, more guitars will need to be produced in order to satisfy this demand. Production of acoustic guitars, which are mostly made of wood, poses a significant problem to deforestation, as there are very few international agreements on the sustainable sourcing of wood for making instruments. Some guitar brands have gone above and beyond existing regulations however, with Martin Guitars being one of them. Recently Martin Guitars released their 00L Earth, an acoustic guitar that is both 100% FSC(Forest Stewardship Council)-certified and 100% plastic-free. On its body is an image of the Earth, which Robert Goetzel, the artist behind the guitar, says was inspired by Greta Thunberg and her Fridays for Future movement. Not only does this product send a good message regarding climate action, but it is also sustainably produced, which sets a good example for all guitar companies to follow.

The 00L Earth guitar is made of various types of wood, ranging from sitka spruce, sapele, and ebony. These woods are all native to different regions, with ebony native to Africa and Sitka Spruce native to North America. In the specifications for the 00L Earth, it does not specify where each of these woods are sourced from, and there is not much information on how and where Martin gets its wood. This is most likely due to confidentiality issues pertaining to Martin’s business practices. But, since the guitar is 100% FSC-certified, the materials that go into the guitar are sourced from a forest that complies with the FSC Forest Management Standard. The rules laid out in the Forest Management Standard includes respect for indigenous peoples’ rights, consideration of environmental impact, a management plan, and monitoring and assessment. Because the FSC does not publish the results of its audits, it is unknown to what extent Martin adheres to these rules. The fact that the 00L Earth is 100% plastic-free also makes it more environmentally friendly. With that being said, Martin should become more transparent on where it sources its wood, and the results of its audits, especially if it is trying to show its solidarity with the environmental movement.

The FSC’s certification of the 00L Earth goes beyond just the forest from which the material is sourced. For a product to be labeled as FSC certified, it must go through chain-of-custody certification, which means any company in the supply chain of the product must also be FSC certified. With the case of a guitar, this includes loggers, sawmills, lumberyards, and distributors. All the companies involved in this supply chain have systems in place to make sure that at any point, the material they are using is FSC-certified. The FSC also has core labour requirements as part of its chain-of-custody certification, which state that the organization shall not use child labour, forced or compulsory labour, engage in discriminatory practices, and must allow for collective bargaining. The Martin factory in Nazareth, Pennsylvania also has environmentally-friendly features such as passive reheating and string recycling. These factors all contribute to a highly sustainable supply chain.

Martin Guitars has made several attempts to become more sustainable in the past. For example, in the 1960s when demand for ivory led to the mass slaughter of elephants, Martin Guitars phased out the use of ivory in its guitars and substituted it with synthetic materials. In the 1990s, the current CEO and chairman of Martin Guitars, Chris Martin IV, decided to look for ways to sustainably source wood, and eventually settled on the FSC, which uses a third-party certification system that accredits certification bodies to conduct audits to FSC standards. Using this system, Martin Guitars was chain-of-custody certified from 1997 to 2004. While this process was not inexpensive or easy, Chris Martin says: “I don’t want my daughter, who’ll inherit this company, to go to a tradeshow one day with a t-shirt that says, ‘my daddy cut down the last tree, and I had to close down the factory’”. These efforts show Martin Guitar’s history of being environmentally friendly as well as the CEO’s vision with regards to sustainability.
Martin guitars are produced by highly skilled guitar makers, and use manual techniques instead of automation. It seems like they have a small team of luthiers, which is surprising considering the guitar company’s well-established reputation. There is not much information on the employment practices of Martin guitars, but the absence of luthiers of POC on Martin’s website may point to an area of expertise that is not yet accessible to people of all races or Martin Guitar’s flaws when it comes to equal employment opportunities.