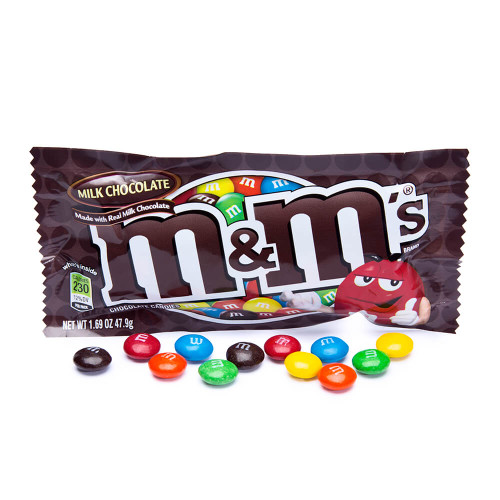 The M&M is a staple of American candy that has been around since World War 2 and represents a great American story of family business that has been growing since the 1940s. It was even the first candy in space! Personally, peanut M&M’s are my favorite candy and I love to snack on them while I do homework or watch tv, so I was hesitant to research the Mars corporation and review M&M’s. However, I was surprised to find that Mars is generally well-regarded for its efforts in preventing deforestation, and has taken action to employ practices that are better than the industry standard. Overall, M&M, and Mars as the 6th largest privately owned company in the United States, is hitting the mark for sustainable production and practices, despite a few objectionable details.

M&M’s have a simple recipe list with no confusing chemicals or ingredients that are known to be harmful. While the Eat Well Guide found the candy to be 64% sugar by weight, this seems to be their only major flaw. On the basis of M&M’s being unhealthy, EWG rates the candy very poorly, however, the ingredient list is mainly comprised of sugar, chocolate, and food colorings, none of which are of concern to the average consumer. One thing to note is that food dyes can cause allergic reactions in some people and hyperactivity in children, but the average person who consumes the candy in moderation is unlikely to experience these effects.

While the ingredients used in M&M’s do not appear to pose a threat to the consumer’s health, Mars sources cocoa beans and (for peanut M&M’s) palm oil from rainforests, whose production generally poses a major threat to the health of the environment. In fact, the World Wildlife Fund says that 300 football fields of tropical rainforest are cleared every hour to be converted into palm oil plantations. This clearing of rainforests happens for cocoa bean farming as well, and together this rapid destruction has razed tons of tropical habitats and raised greenhouse gas emissions by roughly 10%. Due to these effects, it is clear that corporations have embraced the destruction of rainforests—mostly in west Africa—as they attempt to keep up with consumption around the world.

In spite of how vastly unsustainable this logging and farming is, Mars has vowed to change their ways and act as a force for good in preventing deforestation. In October 2020, Mars claimed to have adopted new standards in their supply chains that would not contribute to deforestation. In following through with this goal, Mars eliminated production from 2 major palm oil suppliers and 21 minor suppliers that could not meet their new, environmentally friendly standards. This appears to be strong progress in the fight against deforestation and towards sustainable production, and gives me good reason to believe that Mars is a sustainable corporation. Thus, consumers can conclude that buying M&M’s does not significantly contribute to deforestation through their palm oil or cocoa bean production, at least in comparison to other corporations that are involved in palm oil and cocoa bean supply.

If you are considering purchasing M&Ms, you have no reason to be worried about what’s inside each candy, so long as you account for your intake of sugar. Moreover, you can be assured by Mars’ actions to cleanse their supply chain that you are not supporting a company that embraces the destruction of the planet’s rainforests.

Half of all M&M’s sold in the United States are made in a factory in Hackettstown, New Jersey. In this factory, the production process consists of machines carefully mixing ingredients, molding chocolate, and coloring the candies, and it can take between 10-12 hours for one bag of M&M’s to be produced. While this sounds like a long time, the huge scale of production allows for one hundred million individual M&M’s to be produced each day. I was able to easily view the production process online and I couldn’t find any reasons to be concerned about the way the factory operates, although there were certain processes that Mars keeps a secret from the public. It is highly likely that this is just a precaution so that no other companies can replicate their production process, but the mystery causes me to wonder if there are practices that Mars thinks are better hidden from the public. While we can only speculate about these hidden few steps, the majority of the factory’s production is straightforward and nothing stuck out to me as problematic or unsustainable.

While production is one important part of being a sustainable brand, it is also important for employees to work in sustainable conditions. This seems to be a top priority at Mars, and this is reflected in their yearly statement addressing modern slavery and working conditions each year. In this statement, they highlight their ambitions and guiding values for treating employees, and detail actions they take to ensure working conditions are fair and not harmful. For example, in 2020 Mars conducted facility assessments at 48 manufacturing sites in 17 countries, and identified 11 suppliers that have improved labor conditions since their last assessment.

In all, the production experience at M&M factories seems to prioritize treating employees well and maintaining straightforward, machine-run production, even though the company keeps some secrets.

Overall, Mars seems to be an admirable corporation because of its environmentally friendly ambitions and its real-world follow-through. If my word is not enough, believe the World Wildlife Fund, who in 2019 gave Mars a score of 17.3 out of 22 for their efforts to maintain a sustainable palm-oil industry and prevent deforestation. This placed them at 12th out of 173 corporations reviewed in the study. As you can see from this high mark, Mars not only talks the talk but walks it too.

On their website, Mars has loads of information and plans for net-zero and sustainable growth, and plenty of easily accessible statistics to summarize their progress. Little can be found on the internet to discount their progress or speak badly against the company, so I feel inclined to believe that Mars acts ethically behind the scenes. The only negative press I was able to find included one pending lawsuit claiming that chocolate companies, including Mars, have benefitted from child slavery on cocoa bean farms, but I am refraining from factoring this into my rating because the case is still pending.