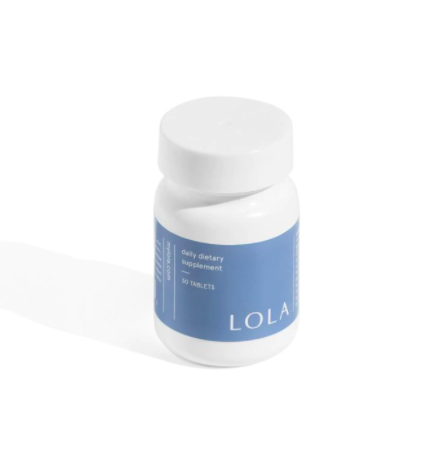 The multivitamin industry has become a multi-billion-dollar business that intrigues me from both a health perspective and an environmental one as most pill bottles are made of plastic and are disposed of monthly, or even weekly. Since data from the Centers for Disease Control and Prevention indicates that more than 50% of Americans take dietary supplements, looking into the health and environmental impact of this practice which is considered by most part of a healthy lifestyle will help me, and hopefully others as well, find out just how much good we do to our bodies and planet by taking these vitamin supplements. Although scientific evidence shows no significant benefits of taking multivitamins, I have also succumbed to the promise of a better immune system, better concentration, or relieved period cramps in the case of Lola’s product. Lola is a company that focuses on feminine care, claiming to sell high-quality and natural products. Reviewing their product, however, I would recommend that consumers save their money, focus on other healthy habits and perhaps look into other period-care/health products. While Lola’s initiative seems encouraging as they advocate for sustainability and women’s health, their multivitamins definitely don’t reflect their mission.

While most of the ingredients are not necessarily harmful, there are some which do not only pose an important environmental threat, but also dangerous health risks. Talc, for example, according to research, regardless of whether it contains asbestos (a naturally occurring mineral famous for its health and safety risks) or not, has been linked to inflammation and different types of cancer (e.g. ovarian, cervical, or lung cancers). The U.S. Food and Drug Administration has acknowledged the research, but argues that more “conclusive evidence” is still needed in order to require products to have a warning label. Talc, which is essentially finely ground stone particles, is also a hazard for the environment, as mining it reportedly destroys animal sanctuaries.

Another questionable ingredient is titanium dioxide, which although does not pose environmental risks, could, according to the Canadian Center for Occupational Health and Safety, be a carcinogen, as links have been found in animals between this chemical and lung cancer. Sucrose, another ingredient, can raise blood sugar levels and in large quantities even cause health problems. The list of hazardous ingredients continues with mineral oil, which untreated is carcinogenic, as explained by the American Cancer Society. From an environmental perspective, mineral oil is also problematic, as it is neither biodegradable nor from a renewable source. Next on the questionable ingredients list, we have “BHT” which is short for butylated hydroxytoluene, a flavor enhancer and preservative. This controversial chemical has been linked to cancer in animal testing and is in fact banned from foods throughout Europe, Australia, New Zealand, and Japan. In the US, the FDA categorizes as “GRAS” (“generally recognized as safe”), meaning that it is considered safe in certain amounts, it does not have to undergo a “pre-market review.”

Finally, silica, an oxide commonly found as quartz, also poses health and environmental risks, due to the nature of the mining process. The packaging and bottles used are all recyclable. They acknowledge that their products are not biodegradable, as they would take longer than a year to decompose. So, although they claim that their vitamins support a healthy cycle and reduce PMS symptoms, their ingredients appear to tell another story. It is also important to mention that their statement has not been approved by the FDA, so the basis of their statement is fragile, especially looking at some of the ingredients in the supplement.

While their period products are made in Europe and packaged in the US, no information was available on where these supplements are made. The sourcing process of some of the ingredients mentioned above, like talc, sucrose, mineral oil, and silica, poses significant environmental risk and health risks to those who mine these ingredients and to those who consume them. Reports highlight the fact that talc is often sourced illegally by mining in animal sanctuaries, which have led to the destruction of the Indian tiger’s natural habitat. It is noteworthy to mention that I could find no information on how they source their talc, so we could hope that their practices are better, but this report can’t be ignored. According to the WWF, sucrose (sugar) is also nocive to the environment, as sourcing it can lead to wildlife, soil, air, and water degradation, as the cultivation and process of sugar often implies the loss of habitats, the use of chemicals, intense water use, as well as different pollutants. The mining process of silica also leads, according to reports, to the deterioration of land, loss of biodiversity, pollution, as well as to the deterioration of ground water and drainage systems. There was no information available on the wages and working conditions of those who source these ingredients and there was no transparency about the life cycle of the product.

Lola is a women-owned company that provides a wide range of period-care products and many subscription options, catering to the specific needs of each person. A positive aspect is that they make it a priority to help those in need and raise awareness of reproductive equity, donating more than 6 million products. While it is great that they make it their mission to shed light on social, racial, and economic disparities, more concrete plans and calls to action are needed in order to feel like us, consumers, are in the same fight as them, otherwise these feel like vague, empty promises. While their other products may be more sustainable, the multivitamin supplement that promises to relieve PMS symptoms is not one of them. Women’s health is something I value immensely, and I would have loved to see more transparency and uncontroversial, healthy, and sustainable ingredients in a brand that promotes health and education.