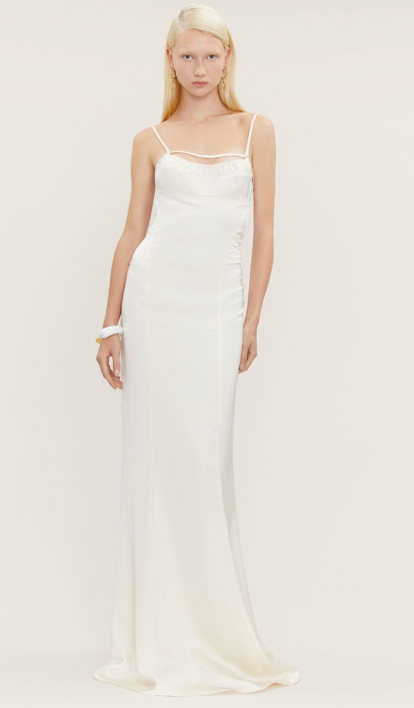 ‘La robe Novio’ is made of viscose, a product whose sustainability has recently been questioned. Indeed, depending how it is produced, it can be more or less harmful to the environment. Though Jacquemus does not label itself sustainable, it has recently shown a strong commitment to eco-friendly practices, notably through its 2020 fashion shows. Overall, there is not enough information available on its supply chain to mark it with high grades with certainty, but the brand seems committed to making positive change within the fashion industry. It is safe to say that it may become a leader in sustainable fashion in the next years. Also, it is worth noting its role in pioneering racial inclusivity and size diversity. There is a lot to be excited about for its initiatives to come.

Though natural fabrics are part of Jacquemus’ heritage, the brand does not label itself as sustainable. ‘La robe Novio’ is made at 100% of viscose. It is the fabric most used by the Jacquemus, accounting for 32% of the products. Viscose is very popular in the fashion industry because it is a cheaper and more durable alternative to silk. It is often deemed a sustainable alternative to cotton and polyester. If it is not a sustainable material per se, sustainable viscose alternatives exist, such as Ecovero, which certify up to 50% lower emissions and water impact than generic viscose as well supply chain transparency and sustainable wood and pulp sourcing/procurement. Using upcycled viscose is also a good alternative to producing it. In addition to viscose, Jacquemus uses the following fabrics: cotton (31%), linen (9%), wool (2%), polyester (9%) and nylon (11%). If cotton is a natural fabric, it is worth noting that you need 10 000 litres of water to produce 1kg of cotton. The viscose dress reviewed here costs about £800. Considered as a luxury brand, Jacquemus’ products remain less expensive than its competitors in the luxury industry, such as Prada or Balenciaga.

Viscose is made from tree wood pulp or ‘cellulose’ of fast-growing, regenerative trees such as beech and pine as well as plants such as bamboo or sugar cane. It is then treated with chemicals like acetone to produce a substance further spun into fibres. Thus, viscose is neither entirely natural nor entirely synthetic. Because it is made from cellulose, it is arguably more eco-friendly than other synthetic fibers. Additionally, it is increasingly being produced with the Lyocell process, a method that produces little waste product, making it far more sustainable. Nonetheless, many criticisms have been raised as to its ecologic nature. In fact, depending on how it is made, it is more or less damaging. Unfortunately, I could not find such specific information on Jacquesmus’ products online. However, the brand claims to have used its purchasing power to make the practices of its suppliers more ecological, showing how a brand can use its influence to bring about positive change.

In 2009, while he was only 19, Simon Porte Jacquemus launched his own fashion brand, which reached a turnover as high as 25 million in 2019.  As the designer acknowledges himself, branding is everything and with his millions of followers on Instagram, he is nearly as much an influencer as a designer. He is now known worldwide for his refined designs with a touch of French elegance. Despite his dazzling success, he has asserted his desire to maintain independence from investors and assert his vision and principles in the brand’s culture. The brand uses its fashion shows and online platforms to advocate size inclusivity and racial diversity. Unfortunately, there is little information available on Jacquemus’ suppliers, except for the products’ production location which can be found on its official website. I would like to see more transparency on the production process or the sourcing of raw materials. Despite this shadow area, Jacquemus quite recently made a breakthrough in the eco-friendly direction. The designer and owner of the company, Simon Porte Jacquemus, decided to restrain his 2020 shows at two instead of the four traditional ones. Additionally, both shows included menswear and women, allowing to reduce production costs and wastage. Crucially, these decisions come at a time when the ecological impact of Fashion Weeks is increasingly being singled out.

Link to the product and the official website https://www.jacquemus.com/fr/product/la-robe-novio-champagne>

On the fabrics used by Jacquemus and comparison with other brands within the fashion industry <https://www.jacquemus.com/fr/product/la-robe-novio-champagne>