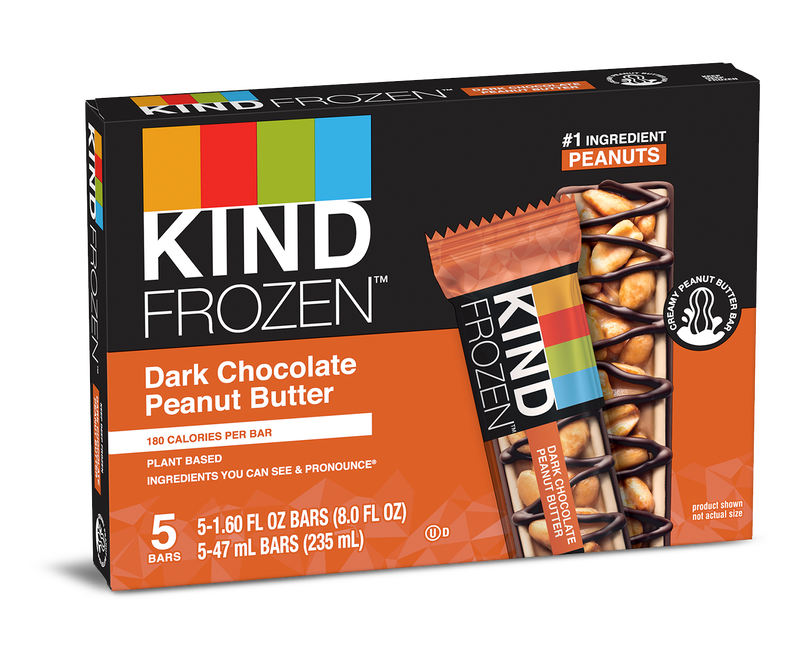 After years of loving KIND bars, my family recently discovered their new frozen bar line. At $5.49 a box, the frozen peanut butter bars are an accessible and unbelievably delicious alternative to ice cream. KIND’s mission to disrupt solely profit driven capitalist business models in order to spread global kindness and empathy is extraordinarily important, and the steps they’ve taken along the way are admirable. Going forward, it is integral that they continue to expand on their foundational values in order to push their sustainable efforts, and support for all of the great causes that they invest in, even further.

Under the KIND promise, the very first ingredient of each product the company makes is a nutrient-dense food such as whole nuts, whole grains, or whole fruit. In a world dominated by overly processed snack food, this has proven to be a disruptive notion. For the Frozen Dark Chocolate Peanut Butter bar, the main ingredient is peanuts, in the form of both whole nuts and frozen peanut milk. The bar is also free of trans fat, GMOs, and gluten. KIND is deeply committed to crafting food with real, recognizable ingredients and working with farmers who share this passion. They are also invested in providing transparency in all areas of the supply chain, from ingredients, to manufacturing, to packaging. For instance, while they emphasize the health and environmental benefits of raising and eating plant proteins, they also recognize that there is still a negative planetary impact. In 2020, they became the first snack company to commit to exclusively source all almonds from pesticide free bee-friendly farms by 2025. In addition, KIND aspires to reach 100% recyclability, compostability, or reusability across all plastic packaging by 2025, while also reducing the use of single-use plastic overall. Many companies set ambiguous and performative future goals, but it is quite clear that KIND’s goals are already backed by concerted action and meaningful partnerships, and will be seen through to the end.

The KIND Frozen peanut bar is made with a base of frozen peanut milk and layered with dark chocolate, peanuts, and peanut butter. This highlights the company’s promise to create nutrient and protein rich snacks with real, unprocessed food. They refuse to manipulate ingredients for the sake of efficiency and seek to maximize transparency about their processes, prioritizing unique, high quality ingredients that energize and fill you up. All decisions about ingredient sourcing and the production process are holistically evaluated on the basis of empathy for consumers and the global community. Through making each product, they also strive to ensure that people don’t have to choose between health and taste, using as little sugar as possible, and never any artificial sweeteners. In this regard, KIND was notably the first national snack brand to disclose the added sugar content for each of their products. The company has also worked to redefine how Americans think about the word “healthy,” pushing back on outdated FDA regulations through a Citizen Petition to separate healthy fats found in nuts and other nutritious ingredients from unhealthy or saturated fats on nutrition fact labels. Food production can also be a very energy and resource intensive process, so in 2020, KIND leveraged enough renewable energy credits to offset electricity usage for their U.S. offices and manufacturing sites. In addition, they have invested in research and experimentation on reducing the amount of water needed to grow a pound of almonds. Regardless of this significant progress, they also recognize that they must still go further, seeking to integrate renewable energy sources into direct production and operations in the near future.

In 2004, Daniel Lubetzky founded Kind Healthy Snacks in New York City. As the son of a Holocaust survivor and a Mexican immigrant, Lubetzky wanted to bring more kindness and empathy to the world and build bridges between people. As a result, he created KIND within the premise that “business can be a force for social good.” The company believes that creating easily portable nutrient-dense snacks that are kinder to bodies, community, and the planet, alongside developing meaningful projects, is the most positively impactful thing that they can do. As a “not only for profit” company, KIND uses their drive for kindness to push back on the overly individualistic nature of capitalism in order to create collectivity and community within the company and around the world. Over time, greater popularity and profit have afforded them the ability to build a set of comprehensively kind policies, values, and benefits for their employees and all partners that they work with.

In order to further his goals, Lubetzy founded The KIND Foundation in 2016, a separate 501(c)(3) non-profit organization. As they explain, “Kindness can be a transformative force for good – encouraging people to step out of their comfort zones and discover each other’s humanity. By embracing the power of our differences, we believe we can create a kinder, more empathetic world.” Their approach is to create and invest in initiatives with long lasting impact, such as supporting frontline workers during the COVID-19 pandemic and connecting classrooms around the world through the launch of Empatico, a free video tool aiming to spread kindness and empathy through meaningful interactions among diverse peers. KIND has also worked to combat social injustices through donations and awareness, addressing systemic racism, empowering homeless LGBTQ+ youth, and advancing gender equality. Since day one, KIND and the KIND Foundation have invested over $35 million dollars in charitable causes, spent over 55,000 hours volunteering, and have reached 74,000 young people. This is all wonderfully important, and the company recognizes that they must strive even further and broaden their impact on global kindness and empathy for both people and the planet.