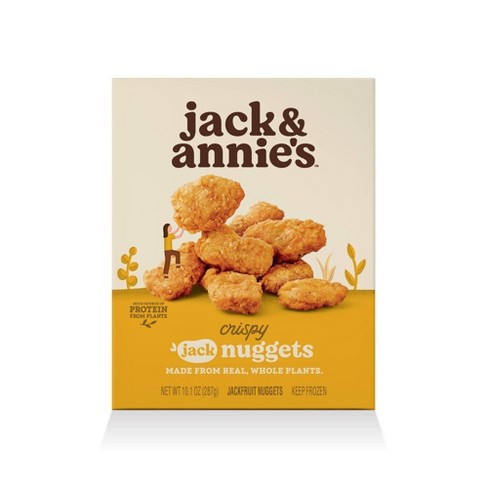 A huge part of my plant-based experience has been searching to find an accurate replacement for a childhood favorite: chicken nuggets. I’ve searched through so many alternatives: soy, pea protein, mushroom, veggie, and more. When I found Jack & Annie’s, I was skeptical as I hadn’t had too much experience with jackfruit. However, not only is it one of the closest replicas I have ever had, but the company impressed me with their transparency, commitment to quality, and treatment of their employees.

The Crispy Jack Nuggets are made of jackfruit, which comes from the jack tree found in India. Jack & Annie’s harvests from wild trees, which as they explain, are home to many species that are supported by their industry. They also stated that, “shade from existing and new trees [they] plant support lower growing crops and plants.” Another positive aspect of the jack tree that they noted on their website was the fact that the trees are naturally resistant to drought, heat, and pests. This prevents the need for any sort of artificial irrigation or pesticides which would negatively impact the surrounding environment. According to Jack & Annie’s, 70% of jackfruit goes unused, meaning that increased consumption not only reduces waste, but also reduces meat consumption.

On their website, they explained that through Jack & Annie’s, 8,000 acres of land have been certified organic. I did a little more research into this term to understand what the implications of this truly are. According to the USDA, “Produce can be called organic if it’s certified to have grown on soil that had no prohibited substances applied for three years prior to harvest. Prohibited substances include most synthetic fertilizers and pesticides." The impact that this can have on the environment is immensely positive. According to HelpGuide.org, organic produce that results from organic farming practices reduces the pollution of the surrounding land, which may run off into water, reduces soil erosion and soil infertility, and saves energy. Jack & Annie’s also use, “full container load ocean freight to get our food from India to North America in the most carbon efficient way.” I looked up full container load (FCL) and less than container load (LCL) in order to understand the difference in efficiency between these two options, and learned that FCL means the container only contains goods owned by one company, while LCL has multiple companies goods packed into one container. I stumbled across a blog post by GreenCarrier who states that LCL shipments are actually more sustainable and economical, which confused me as that contradicted the statements that had been made by Jack & Annie’s. However, when I read more, I learned that GreenCarrier appreciated LCL shipments because they appreciated the fast consumption rate of today’s economy, and LCL shipments allow you to produce less, faster and more often. So, in our terms, this is the less sustainable option.

I was a little bit confused by the layout of the brand. I then learned through their website that Jack & Annie’s seems to be owned by a larger company called the Jackfruit Company, which was founded by Annie Ryu in 2011. Ryu’s goal through the company is to, “transform healthy eating, farmers’ livelihoods, and humanity’s eco-footprint for the better.” Based on what I saw on the website, it seems like a huge aspect of the company, as they mention it a lot. While they offered some insight into how they planned on achieving these goals, which I really appreciated, a lot of it was vague and lacked more concrete examples of what they were doing. I also struggled to find more information online about the company and their business practices, which was upsetting because I do truly believe in their good intentions, I just wish they supported their claims more directly. They did, however, provide some statistics that reassured me that their claims were not completely illegitimate. They state: “1,000 farming families earn 10-40% of their income by selling us jackfruit directly,” and that their “straight-from-the-farmer“ supply chain contributes to increased income and livelihood for the farmers. They also asserted that because the jack tree does not need to be replanted each year, planting new trees is a great investment for farmers.