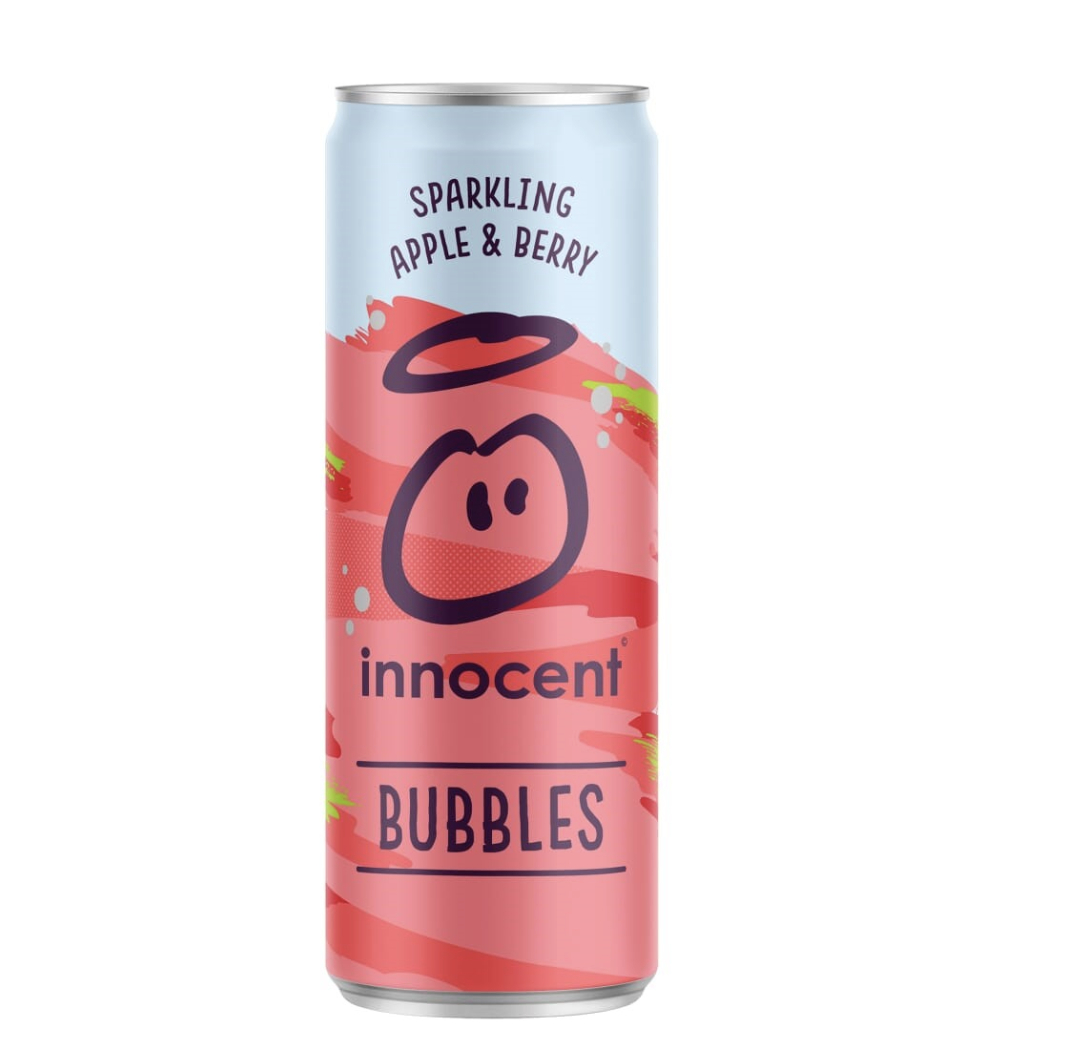 Innocent Drinks was started by three Cambridge graduates in 1999, pitching themselves at a small London music festival. Since then, the brand has become one of the most popular smoothie and drink companies in the world. Interestingly, Innocent promises that their products not only taste good but do good as well. This review will explore the sustainability of Innocent’s Bubbles, a drink made in a recyclable aluminium can, in a carbon neutral factory with fruit that supports the livelihoods of small farmers. Overall, I was extremely impressed with Innocent as a company, but was surprised by how much important information was not publicly available, such as where the water or aluminium was sourced.

The drink is made of two components: the sparkling juice itself and the aluminium can. The juice contains apples, strawberries, blackcurrant, white grapes, raspberries, mandarins and sparkling spring water. There is a lot of information available about the considerations for sourcing the fruit sustainably; in 2020, 82% of their ingredients were at a SAI-FSA standard (Sustainable Agriculture Iniative and Farm Sustainability Assessment) – a tool which measures the sustainability of farming practices. They have a goal to make this figure 100%, but do not specify how quickly they plan to do so. However, Innocent have put in a lot of effort (and money) to ensure the ingredients are sourced sustainably throughout Europe. By implementing farmer workshops to Spanish strawberry farmers and developing an app called Irri-Fresa, which calculates optimal daily irrigation times, 1.7 billion litres of water were saved. Furthermore, they partnered with their apple suppliers to create bee habitats in apple orchards for efficient pollination and to explore better ways of managing pest control. Ultimately, this helps to restore biodiversity and keep the local ecosystem healthy. Innocent chooses to not use organic products, but this is so they can support smaller, more independent farmers. Despite all of this, there is no information publicly available on where and how the other ingredients are sourced.

Aluminium cans are virtually the most sustainable beverage package on almost every measure. This is because they can be recycled indefinitely if not contaminated – almost 75% of all the aluminium ever produced in the US is still in use today. As it is lightweight, it is easier and cheaper to transport, saving emissions. Although abundant within Earth’s crust, aluminium requires heavy machinery and open-pit mining to extract it. Since it doesn’t reside deep in the surface, less energy is needed for drilling. Despite this, massive amounts of land are destroyed, disrupting livelihoods and ecosystems for generations. Additionally, the fact it is present in the Earth as bauxite ore means it must also be processed, and refining processes use large amounts of electricity, generated from fossil fuels, and water. Innocent do not disclose where they source their aluminium or how they process it. This lack of transparency is concerning and has been reflected in the score.

Innocent began measuring their carbon footprint in 2004, making them one of the first companies to do so in the UK. Innocent is on a mission to be entirely carbon neutral by 2025. It has done this by changing the operations of their factories and transport networks, setting socio-environmental standards for farmers and by practicing carbon offsetting.

The company has put a lot of effort in to address their carbon emissions from factories and transportation. Innocent prioritises the use trains instead of trucks for transport and have put in effort to find more efficient routes – this has consequently removed 1.2 million miles from their road networks. They have also been trialling fully electric trucks in Germany, to reduce their environmental impact when they must travel by road. Furthermore, they use boats instead of planes, which supposedly reduces carbon emissions by a factor of 86. In 2010, their biggest factory swapped to 100% renewable energy. Alongside this, they have recently finished the construction of a carbon neutral plant in Rotterdam, which runs on 100% renewable energy from solar and wind energy, will be completely carbon neutral. It is one of the reasons why over 80% of drinks to be created and bottled in factories using renewable electricity. It was strategically chosen to access the Port of Rotterdam, to take millions of miles off the road. This will reduce the carbon footprint from every part of the production line, having a potentially monumental impact.

Innocent have their own set of minimum standards covering all relevant environment  and social issues for suppliers that are not covered by existing certification schemes, favouring suppliers certified by independent environmental and social organisations (such as the Rainforest Alliance), and pay a premium for certified fruit. However, they have not conducted any assessments for exposure to hazardous materials in any part of their production network, and do not disclose all by-products and contaminants in the supply chain to the public. Hence, it is impossible to measure anything such as pesticide exposure or the production of waste that cannot be disposed of in a sustainable fashion.

Finally, Innocent practice carbon offsetting – this is when they engage with carbon negative practices to counteract any carbon emitting activities, creating a net carbon neutral effect. On their website, they state that they mainly do this via afforestation, but do not specify where and how they do it. This could be a potential source of greenwashing, especially if the carbon negative effect doesn’t counteract their emissions. They also invest into larger carbon negative schemes, like rainforest conservation schemes. Innocent have begun a farming innovation fund consisting of a pot of €100,000 to help farmers improve biodiversity while capturing carbon at the same time. This is especially striking to me and shows Innocent are willing to sacrifice profits to ensure that their products are grown, processed and sold sustainably. However, the lack of transparency in some areas could be indicative of greenwashing and unsustainable practices that they are trying to hide.

Richard Reed, Adam Balon and Jon Wright founded Innocent, with the vision of a sustainable company before sustainability was even popular or terms like greenwashing existed.  As of 2013, over 90% of Innocent is owned by the Coca-Cola company. The soft drink giant has been accused of everything from being complicit in violence against union members to contributing to a water crisis in El Salvador. The company is also the world’s largest plastic polluter. Once Coca-Cola bought in, the Ethical Consumer magazine halved their ethical rating for Innocent from 12.5/20 to 6.5/20. There has been some public controversy since Coca-Cola gained control of the company: between 2018 and 2021, Innocent recieved 18 complaints made against them regarding consumer protection, because the names of some of the ingredients shared on the description of some drinks were found to be misleading. Although this is challenging the ‘healthy’ aspect of the drink, it shows a lack of transparency and need to keep up appearances.

Despite this, sustainability shines through Innocent’s business practices. They have become a certified B Corporation in 2018 – this is a movement of businesses who are committed to doing business in a responsible way. In 2022, reached a B impact score of 105.2 score out of 200, which was an improvement from their already great previous score. Additionally, they are still investing lots of profit into projects that bring sustainability or good social outcomes. For example, they donate 10% of their profits to charity – in 2020 that was £1.6 million. Over £205,000 has been donated to Age UK, with another £1.9 million raised for the charity from the Big Knit scheme. The Innocent Foundation, Innocent’s own registered charity, claims to have supported 67 different projects since their start in 1998. They practice the same social responsibility around the world: they purchase their fruit directly from ‘underserved suppliers in low-income, poor, or very poor markets’. Furthermore, a premium is paid beyond market price for community support and development. This shows that the values of the 3 original founders are still important to Innocent to this day.