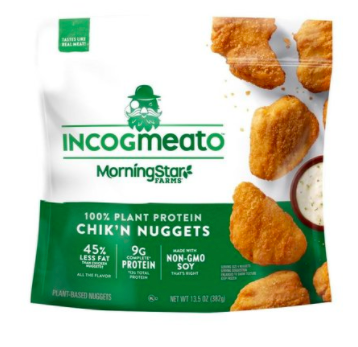 Overall, I think Incogmeato was created with good intentions: to create a meat alternative that any consumer would love and thus reduce overall impact on the environment. It is great that their products have a comparable price to typical chicken nuggets because accessibility is an important intersection to reaching sustainability. However, there are many more steps the company needs to take until they are centered on sustainability. They need to attack CO2 emissions throughout their supply chain, not just in the food itself, and need to ensure that everyone working on their supply chain is respected and compensated fairly.

As the name implies, Incogmeato chik’n nuggets are plant based chicken nuggets that are advertised to be a taste substitute as well as a physical substitute for meat. These nuggets are made from water, wheat flour, non GMO soy, a combination of vegetable oils in addition to some other spices. Incogmeato is owned by Kelloggs, which is a massive food company that works with hundreds of thousands of farmers around the world. According to the Kellogg’s website, their soy, wheat, corn, and palm oil are all close to being 100% responsibly sourced. They have many different systems in place to make sure their smallholder farms are using regenerative farming practices that maintain soil health for the future. It is unclear how small is smallholder, and also what portion of their farms are smallholder versus massive industrial farms. Kellogg’s does not have an organic certification, but they are further into regenerative agriculture than I thought they would be. It is also unclear of how many of their farms are located in the U.S, and how many places the raw ingredients are shipped before they make it to the store shelf. Incogmeato was clearly invented to help the ordinary consumer, who is not extremely eco-conscious start to switch from meat to plant-based nuggets because it has a less intense impact on the planet, or so I thought. After some digging I found out that chicken and beef have a gravely different impact on the environment. Beef is the real culprit to the emissions that come from the meat industry, and chicken is often lumped in with the meat is terrible for the environment discussion. Therefore the plant-based alternative to chicken nuggets does not have the positive environmental impact that I’d hoped for. That doesn’t mean, however, that these replacements aren’t progress towards a more sustainable food industry. These replacements, that taste pretty much like the real thing, can help families start showing their children to have a less meat intensive diet, and that is crucial to the future of sustainability. These nuggets are priced almost the exact same as any leading frozen chicken nugget, which means they are accessible to everyone. This can start the shift to having less meat in our diets, which will definitely reduce the stress that comes from our high meat consumption.

This section should be nice and quick because there was literally no information on the manufacturing and distribution process of incogmeato chicken nuggets. All of the focus on their website is about how choosing their meatless product reduces their impact on the planet, but that is not the only factor that goes into making a food company sustainable. There currently is no easily recyclable freezer bag on the market, so all of their packaging goes to a landfill. Also since there is no information on where their energy comes from, it can be assumed that 100% comes from fossil fuels. There is one factory in Michigan, but other than I could not find any other information on their manufacturing and distribution process.

There is no information about labor practices on the Incogmeato website, but on the Kellogg website they talk about having multiple programs to empower farmers, especially female farmers. There was no indication on any worker receiving a living wage, or being paid fairly.