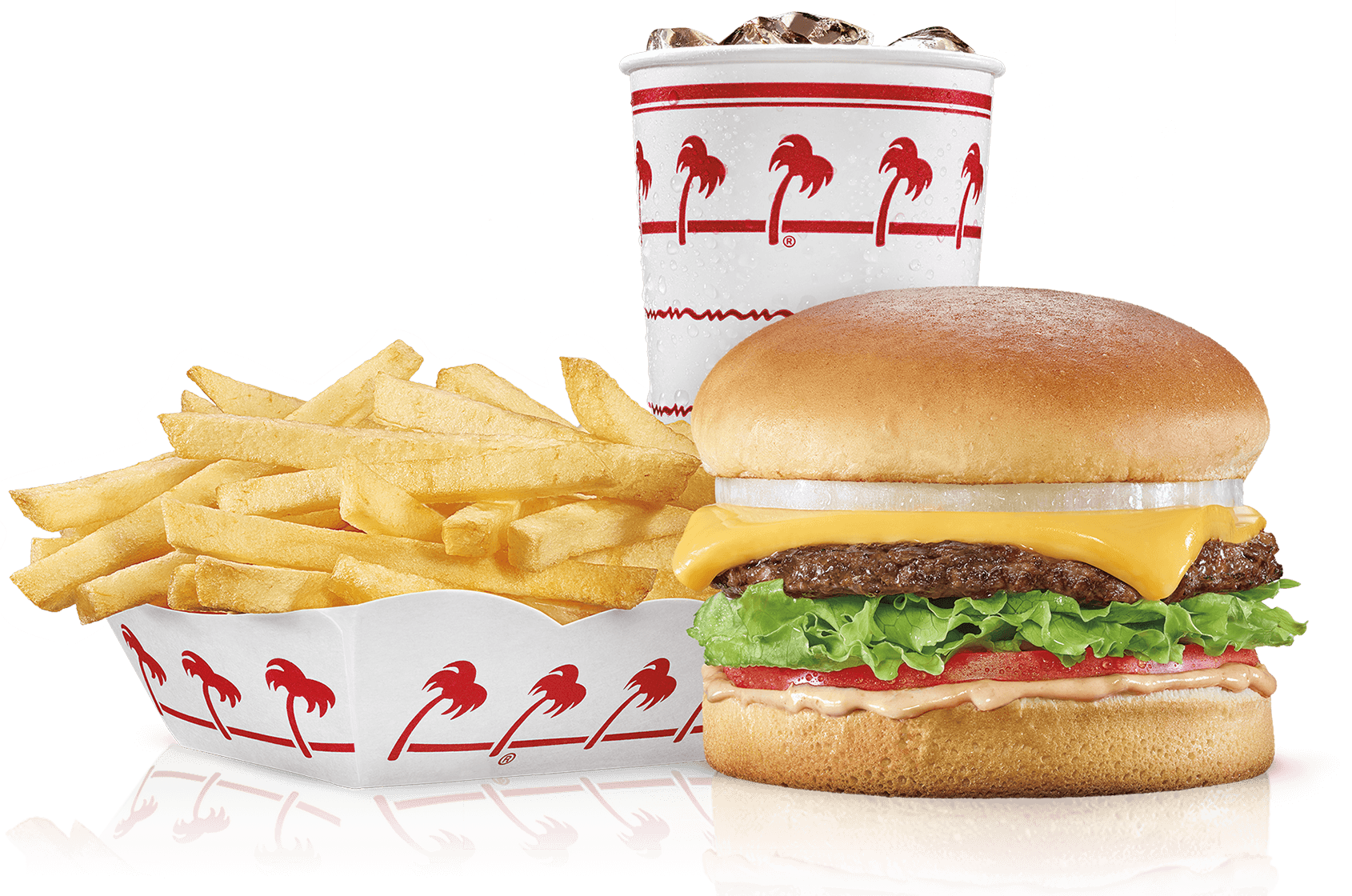 In short, In-N-Out has so much to improve in terms of their investment in sustainability, but being California’s favorite fast food chain seemingly has given them a pass from all the usual environmental critics. I personally will refrain from supporting the restaurant until they are more transparent with their food quality and diversity.

With their famously minimalistic menu, In-N-Out offers only 3 types of burgers: the double-double, the cheeseburger, and the hamburger. Immediately I notice how “meat-heavy” their options are, which could be inaccessible to those who have a beef-free diet. Unlike their contenders Burger King and Carl’s Jr., In-N-Out seems to be unbothered by the meatless burgers revolution in the past couple of years. The franchise prides themselves on cooking the “traditional way”, in addition to the slow-rising buns, hand-picked lettuce, and 100% USDA ground chuck - no additives, fillers, or preservatives. Eric Schlosser, a food critic of the Fast Food Nation, calls In-N-Out burgers “it isn’t health food, but it’s food with integrity”.

Despite Mr. Schlosser’s personal recommendation, In-N-Out recently stumbled upon a few exposé of the meat and fry oil they use. While their french fries are submerged in GMO cottonseed oil, the so-called “world’s dirtiest crop” as pesticides and agricultural chemicals remain in cottonseed oil, In-N-Out meat is from cows that are raised with routine antibiotics. Harris Ranch, In-N-Out’s meat supplier in California, is one of the largest concentrated animal feeding operations on the west coast. The smell of mass slaughtered cows and their excrement reach as far as the I-5 next to the ranch. Antibiotics or growth hormones, which are linked to cancer, are injected in Harris cows. The health concerns regarding In-N-Out patty grew via a petition signed by a coalition of over 50 environmental, animal welfare and consumer groups. The 2016 movement caught the attention of In-N-Out Vice President of Quality Keith Brazeau, to which he responded that the restaurant would commit to antibiotic-free meat in the near future. Since then, there hasn't been any updates from the franchise.

One of the iconic staples of In-N-Out is their exclusivity. The chain is selectively available in only 6 states, California, Arizona, Nevada, Utah, Texas, and Oregon. The reason is because In-N-Out does not own any microwave or freezer, inferring that their limited locations mean their ingredients are always fresh. If this claim is true (and we must always be cautiously open-minded), I would be impressed by their attempt to manage their production chain and reduce emission via transportation.

In-N-Out is an interesting corporation. While they make less-than-desired effort in sustainability, the company is heavily invested in social causes. The chain is the prime sponsor for Child Abuse Prevention (INO4kids.org) and Substance Abuse Awareness organizations (Slave2Nothing.org). Every January and October, In-N-Out match their consumers’ donations to the aforementioned charities by 3-to-1, up to $250,000. Despite being critical about our society’s dependence on private philanthropy, I am willing to give the franchise the benefit of the doubt and credit them for their social initiatives.

In-N-Out is recently under fire for their donation to the California Republican Party. In 3 consecutive years, the chain gave ~$30,000 to the GOP. Twitter translated their anger into the hashtag #BoycottInNOut. Did the call to boycott In-N-Out work? No. But it did paint the restaurant in a different light to its majority left-leaning consumers. Understanding the freedom afforded to In-N-Out by campaign financing rules in the U.S. (even though the problematic practice goes directly at odds with my moral values), I would not judge them too harshly based on their party affiliation/donations, especially knowing that the company also gave $30,000 in 2017 and $50,000 in 2018 to a pro-business Democratic PAC. Rather, I am more concerned about In-N-Out’s meat quality or their lack of research in sustainable food options. These urgent issues at hand, despite totally being in their capability, are still left unaddressed by In-N-Out.