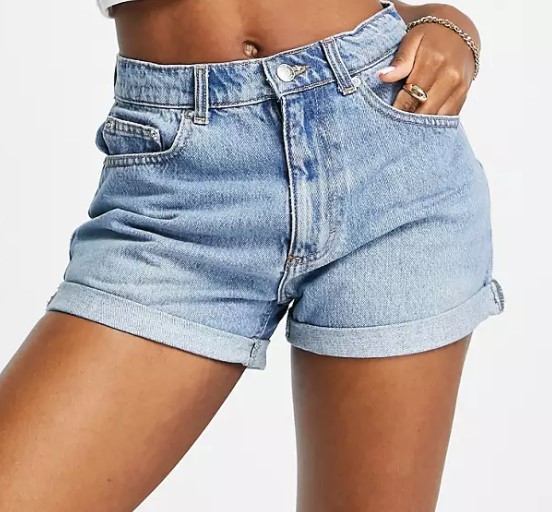 What is most troubling about this product is that it is marketed as a sustainable product, when in actual fact it is barely more responsibly made than ASOS’s other products which are subject to all of the stereotypical negative aspects of fast fashion. ASOS should be ashamed of their blatant greenwashing and endeavour to increase sustainable cotton quantities across more of their products, and do this fast.

This garment is non-stretch denim which is made of 100% cotton. It is advertised as a product made of recycled materials under ASOS’s Responsible Edit. ASOS are members of The Better Cotton Initiative, meaning that cotton is sourced via a system of Mass Balance. Whilst what this actually means remains elusive on ASOS’s website, we know that ASOS are signatories to the 2025 Sustainable Cotton Challenge which means that they are committed to using 100% cotton from the most sustainable sources by 2025. The purpose of this is to increase the uptake of organic and preferred cotton, which has the ability to increase the income of smallholder farmers, eliminate highly hazardous pesticides, eliminate or reduce the amount of pesticides and synthetic fertilizer used, reduce water use and improve water quality and soil health. However, according to ASOS’s definition of ‘recycled’, a product can be branded within the ‘Responsible Edit’ even if it is only partially made from recycled materials. In fact, recycled cotton only requires 20% recycled materials to be stated as recycled - a pretty low bar. This is a very small figure which is not only concerning given the potential environmental and social damage caused by the use of cotton in manufactured garments (see ‘How it’s made’), but also because it is blatant greenwashing. This is because, by claiming that the shorts are made from recycled materials but in reality are only 20% ‘more sustainable’ cotton, ASOS is using a disinformation technique to present an environmentally conscious image whilst in fact doing very little to increase sustainability on a wider scale.

‘Fabric and components’ and ‘raw materials’ are only partially mapped by ASOS, leaving out the most vulnerable members of the supply chain who are likely to be paid the least and to lack sufficient human rights and be subject to the least labour laws. Whilst it is unclear where the cotton directly comes from, most cotton is grown in low- or middle-income countries, which exacerbates the social injustice due to low pay.

Unlike many other corporations I have reviewed, ASOS mentions very little about greenhouse gas emissions that emanate from their manufacturing, which is very surprising given how global their supply chain is (for example, they have factories in Central and South East Asia, Europe, Morocco and Mauritius). ASOS state one of their values as being to be able to grow while adding social value and minimizing environmental impacts. Whilst the growth of ASOS provides higher jobs and dividends to many people, this is not well distributed across the supply chain. For example, CEO Nick Beighton rakes in a salary of $796,921, whilst the company is unable to appropriately map the primary resources that it creates products with, which undoubtedly results in unfair pay at the expense of those in lower income countries. Ultimately, growth impacts people unevenly meaning that social injustice is always served, making ASOS’s statement paradoxical. Additionally, growth means more manufacturing and transportation, creating a net cost to the environment regardless of ASOS’s attempts at ethical practice.

Whilst the manufacturing of these denim shorts is unclear on ASOS’s website, the negative impacts of transportation and cotton in general are well known. For example, for a pair of jeans to be made, 10,000 litres of water is required. That’s like leaving a shower to run for 21 hours. Moreover, Levi's estimates that a pair of their jeans emits 33.4 kg (73 pounds) of CO2 into the atmosphere, the equivalent of driving more than 1,000 kilometers (620 miles) in a car. That's largely because denim is produced in countries like China and India where coal is the main source for electricity. Speaking of which, ASOS has 23665 workers in China and 40787 in India. Further to this, working in a denim factory can also be fatal. Take sandblasting for example. This method uses high pressure hoses to spray sand against denim to create a worn look that has become popular with consumers. For workers who inhale the small particles of sand, the process can cause a deadly lung disease called silicosis.

‘Sustainability without compromising your unique style. All the feel-good vibes.’ This is the slogan for ASOS’s Responsible Edit, which endeavours to demonstrate ethical practices by selling clothes made from recycled materials, such as these denim shorts. The tone of this slogan further demonstrates ASOS’s half-hearted approach to sustainability. Not only is the actual sustainability of their ‘responsible’ products contestable, but the vast majority of their products are produced at great detriment to the environment and social inequality.

Having said this, ASOS are ranked 7 out of 200 on the Fashion Transparency Index, which involves many global brands, and they have signed with IndustriALL Global Union to address the implications of lack of mapping along the supply chain. This is promising to some degree, although there is very little information available on ASOS’s website to imply that change has been enforced. ASOS claim to be working on circularity but this seems to be more performative and experimental: they are in partnership with the Centre for Sustainable Design at London College of Fashion, co-creating a curriculum on circular product design, although this does little in terms of cutting down the vast swathes of waste from the manufacturing and disposal of ASOS’s products. In sum, given that this product is advertised as being sustainable and responsible, there are very few facts to demonstrate material changes to ASOS’s policies, which given their responsibility as a multi-million-dollar corporation with a vast global reach is shocking. ASOS should be ashamed of their blatant greenwashing and should set much higher standards for themselves by making more of their products contain sustainable materials at least, but also increasing greater transparency across the whole supply chain.