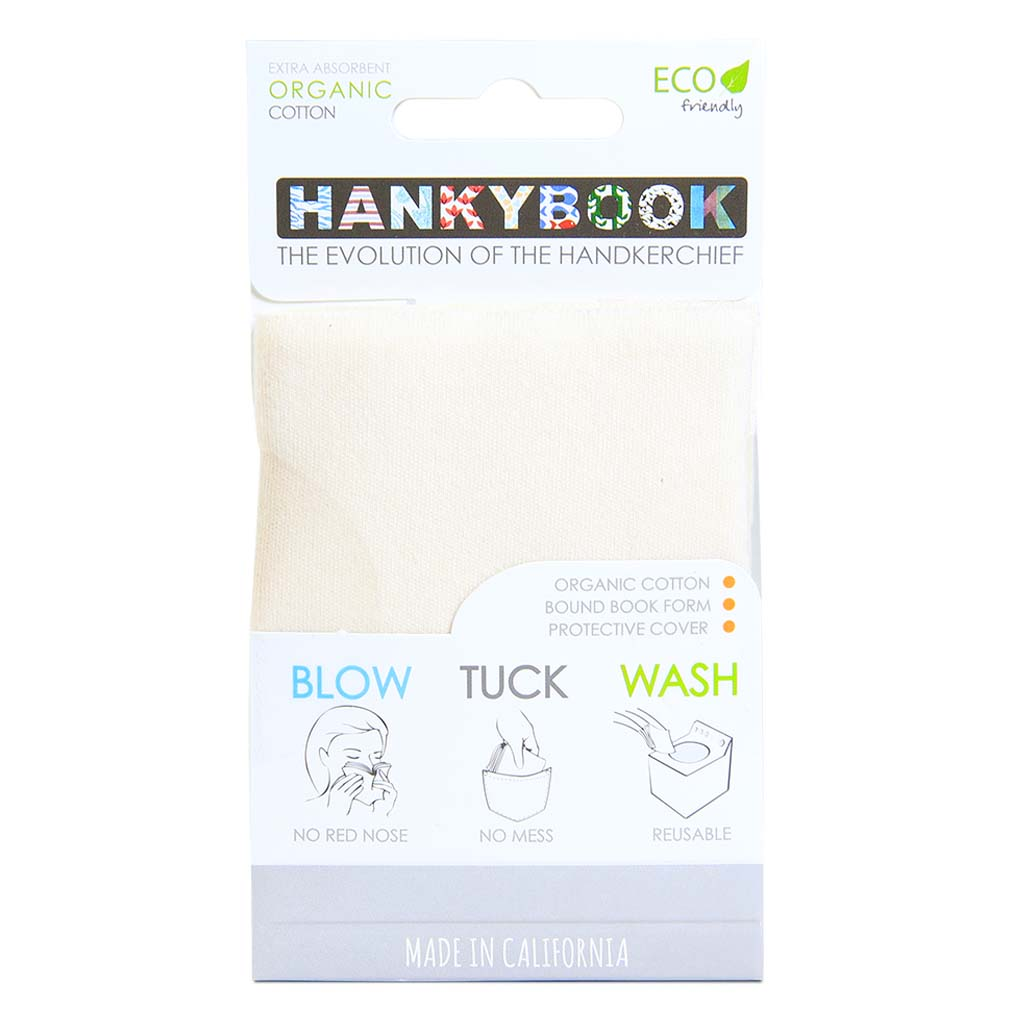 Though I have a positive impression of this company and product, I need a lot more information about its operations and impact.

All HankyBooks are made of 100% certified organic cotton, all of which are milled in the U.S.A. Though there a few other companies using bamboo, organic cotton is ultimately the best material for handkerchiefs. It isn’t clear whether you can compost the HankyBook at the end of its life cycle, but it should last at least 500 times. This is definitely much better than disposable paper tissues, but the HankyBook could also be made out of upcycled material.

HankyBook packaging, on the other hand, is less straightforward. Though it looks like it is made of cardboard, it might not be widely recyclable. It could also easily be replaced with a compostable and minimalist design. Even though it is better than Kleenex packaging, it does not compare to some other handkerchiefs. I believe the packaging is just as important as the handkerchief itself, since it takes up the same amount of space, and is much more disposable.

The HankyBook is definitely worth buying. The company claims that it “pays for itself in a few months and lasts a lifetime”, comparing it to tissues. Compared to other organic cotton handkerchiefs, the pricing is similar. There are also cheaper handkerchiefs, but the design of the HankyBook allows 8 clean, straightforward uses in-between washes. A handkerchief is an essential with many kinds of uses, and the HankyBook fulfills several needs in a sanitary and efficient manner.

All HankyBooks are sewn by hand in San Diego, California. Labor practices are fair, though some extra transparency is needed for how the packaging is made and where it comes from.

Values of sustainability and positive change give strong direction to HankyBook. I appreciate the Sustainability page of their website, but hope for much more content to be displayed in the future. There is currently no plan disclosed for making improvements. The product is YouthTrade certified, indicating that the company would be providing sustainable jobs to young people. The founder of the company, Leslie Uke, seems to genuinely care about the environment. Thus, I think that this company has the best intentions in mind, despite its deficiency in transparency.