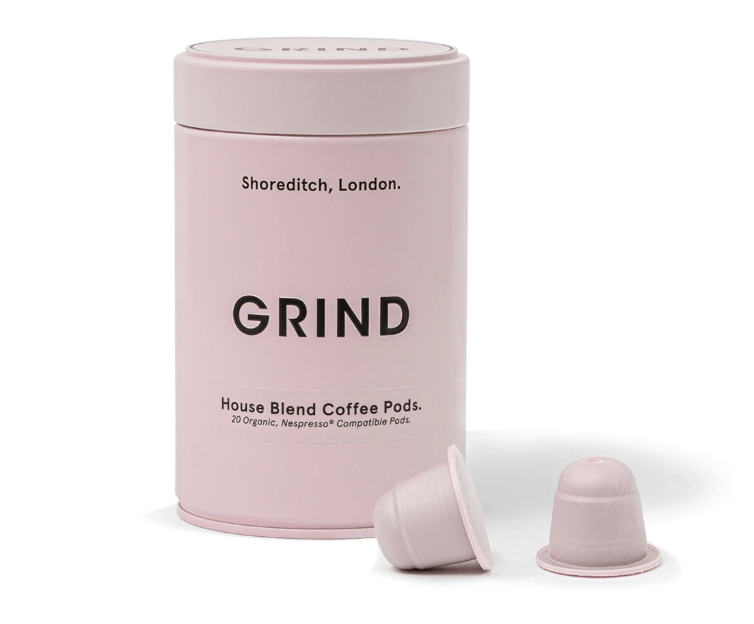 After seeing these pods advertised all around London, and being a coffee addict, I decided to review them to see how sustainable Grind coffee pods are in comparison to Nespresso pods which I regularly use. They claim to be “the most sustainable coffee pod on the planet” and I wanted to find out why. Grind is a British coffee company based in Shoreditch, London which has decided to make compostable pods for Nespresso machines due to the unsustainable nature of the Nespresso aluminium pods.  They are the UK’s first certified home compostable coffee pods and have created them with the most revolutionary technology in the coffee pod world since Nespresso’s aluminium ones were released. Pods are made from PHA and are fully biodegradable, making them earn all 3 planets in the section about what they are made of. Their transparency as a company is exemplary in most aspects, but to get the full 3 planets they should give some more information regarding their process of production and the farms where the coffee is produced as all that is mentioned is that they are sustainable. Lastly, the company that makes these coffee pods is leading in this industry and are constantly innovating whilst taking into account every part of their supply chain, which is why they deserve the 3 planets in that area.

The pods are completely organic and biodegradable. They have been able to make this happen by being innovative by moving away from plastic and aluminium pods and creating these which are made out of a polymer called PHA, which is the final frontier in the world of bioplastics, made from plant or other biological material, instead of petroleum. This means that they are home-compostable and will rarely make it to landfill; however, in the case that they do, they will still break down in landfills or oceans. The pods are constructed from bacterial fermentation, being fully organic and biodegradable as they will break down anywhere on earth within 180 days. PHAs have been described in many reports as the future of single-use plastics. Furthermore, unlike other compostable pods, due to the strong nature of this material, it does not let any oxygen into the pods, which degrades the flavour and quality of the coffee, so these pods mean that coffee stays fresh for years. All of the coffee in the pods is certified organic by the Soil Association which means that they don’t use any genetically modified produce or harmful pesticides in the coffee.

Being made from bioplastics is a huge step forward in sustainability. These coffee pods show the most revolutionary technology in the coffee pod world since Nespresso first dropped their aluminium pods. The process of making this PHA is also amazing as they are constructed by bacterial fermentation which has very little if any effects on the environment. Furthermore, they claim their coffee to be ethically sourced from sustainable farms around the world. They do not really explain their process of production but rather go into detail about how bad Nespresso’s process is and how theirs doesn’t use those materials (aluminium) and those energy-intensive processes to create it. I believe that even though this is their competition and they are an alternative for the same product, they should give more information and be more transparent about their own processes. This is not to say that they are not transparent as a company but I would like to see some more information about how they are made, where and the conditions they are made in. I am giving this section a 2.7 due to this lack of transparency but it could easily be a higher score if they provided this information.

This British coffee company is the first in the world to use micro bacterial fermentation (PHA) for their packaging. They source their coffee beans directly from smallholders around the world by supporting them to grow their farms and invest in their communities. This is great they are able to do so whilst innovating with a product which in its usual form (plastic or aluminium), has 29,000 pods go to landfill every minute. They believe in the convenience of these pods but have built upon the belief that this shouldn’t happen at the expense of the planet. They have proved to be a company that constantly innovates and try to find the best solution for both the planet and their clients. Every order on their website which is delivered is carbon negative: they have offset the carbon emissions of 100,000 orders to date and protecting over 40,000 trees in the Jari Para conservation project in the Amazon. I have therefore given them 3 planets as they are absolutely exemplary as a company and hopefully this allows more people to switch from the Nespresso aluminium pods to this plant-based alternative.