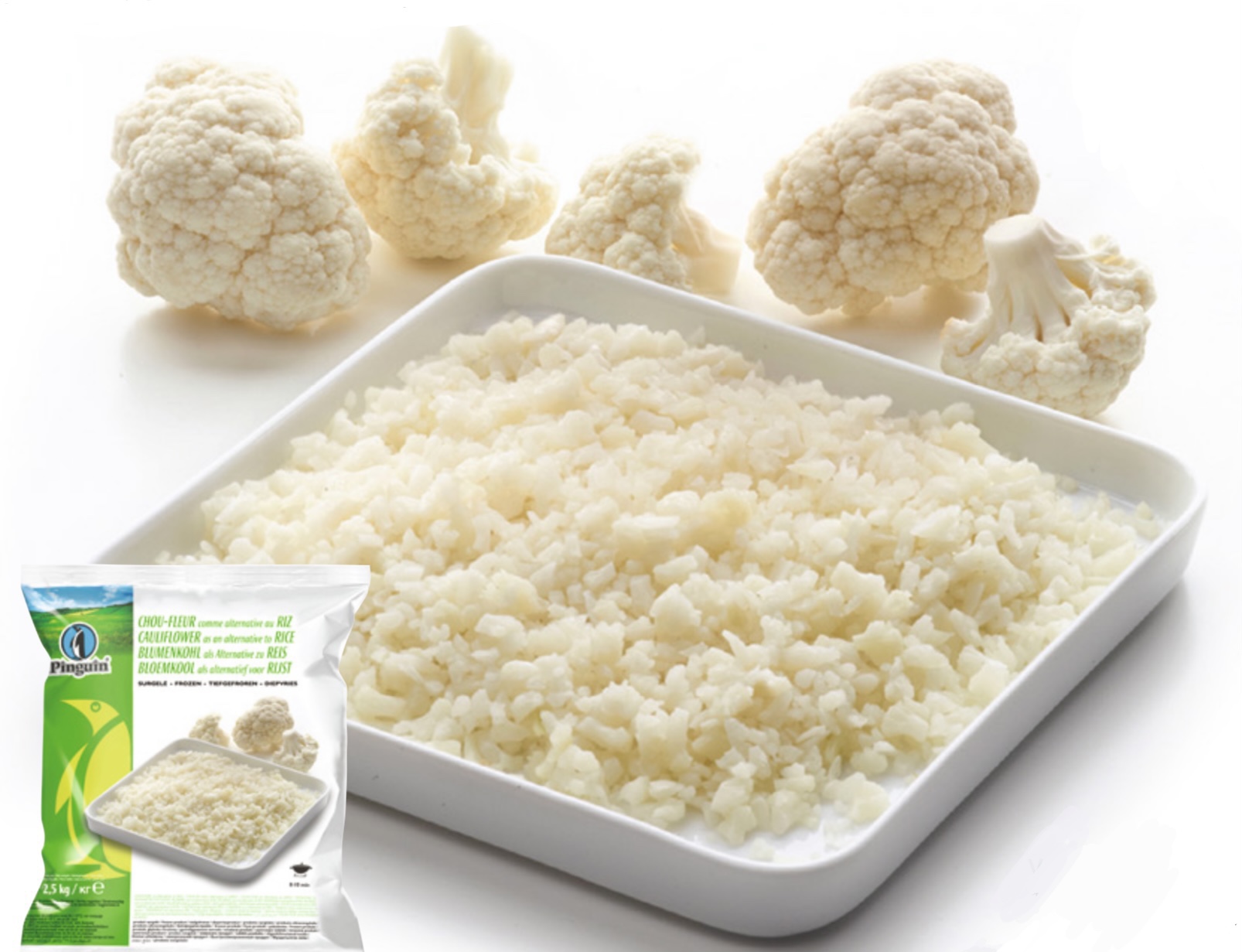 As more and more health-conscious people adopt low-carb, gluten-free, and plant-based diets, food companies are capitalising on the trend to replace white rice, pasta, and other carbs, with vegetables. Cauliflower, in particular, is used frequently because of its mild flavour, rich nutrients, and high versatility. Greenyard popularised cauliflower rice - cauliflowers that are chopped into grain size - to substitute for rice. Greenyard’s invention has good intentions of reducing food waste and providing healthy and convenient options for consumers. Cauliflower itself is also an environmentally efficient vegetable, having low water usage and greenhouse gas emissions. This product retails at $1.20 USD/kg, which is slightly cheaper than most frozen cauliflower sold in the supermarket. However, the lack of transparency in how the cauliflower rice is processed and transported prevented me from giving the product a higher score.

Cauliflower rice was initially developed to reduce food waste. Despite being perfectly edible, consumers were reluctant to accept cauliflowers’ stem, grit, and heart due to their hard texture. Greenyard minced the leftover cauliflower parts and froze them, which could be served and digested easily after a few minutes in the microwave.

Compared to white rice, cauliflower rice only has a fraction of carbohydrates, yet has double the fibre, triple the potassium, and 18 times as much calcium. The reduced carbs in cauliflower rice help people with diabetes control their blood sugar levels, while the additional fibre facilitates digestion, and the higher calcium content fosters muscle growth. However, deciding whether cauliflower rice is healthier than white rice is not black and white. For example, people with an active lifestyle may benefit from consuming white rice since carbs refuel our bodies. Similarly, fibre may cause digestive distress for some, so people with sensitive digestive systems may favour white rice. All in all, the answer to which is the better option depends on your specific lifestyle and dietary goals. Having a balanced, yet diverse diet is the key to having a healthy and strong body.

In terms of packaging, the pouch containing the cauliflower rice is made of polyethylene plastic. Although polyethylene is recyclable, the actual recycling rate depends on the discipline of consumers. Irresponsible customers may still discard the plastic to the bin, drowning landfills with plastic debris that take up to 1000 years to decompose. Every year, millions of animals are killed by plastic through entanglement, pierced organs, or starvation caused by blocked digestive tracts. Greenyard should take an extra step and play a more proactive role in reducing waste. I suggest Greenyard replace plastic packaging with compostable wraps made from plant-based resources, such as corn starch, that dissolve naturally.

Cauliflower has a small environmental footprint. 1 kg of cauliflower uses about 285 litres of water, which is only 10% of what white rice needs. To further save water, Greenyard plans to adopt precision farming, including installing sustainable drip irrigation systems for their crops to eliminate water waste from evaporation. This way the irrigation efficiency can be improved drastically.

Cauliflower plantations also produce fewer greenhouse gases than white rice. Cauliflower rice’s carbon footprint is half of that of white rice. Moreover, while cauliflower does not contribute to methane emissions, rice is a major contributor to this greenhouse gas. Methane is 28 times stronger than carbon dioxide, accelerating the greenhouse effect and global warming by trapping longwave radiation in the atmosphere.

Greenyard never disclosed the emission level of processing, freezing, and cold storage of the cauliflowers. However, it is known that the refrigerants used to freeze food, such as hydrofluorocarbons, have a negative impact on climate 1000 times greater than that of carbon dioxide. Similarly, chlorofluorocarbons damage the ozone layer, which protects us from the sun’s ultraviolet radiation. Greenyard has provided the sum of their annual environmental footprint that covered all of their products. However, for clarity’s sake, I hope Greenyard can break down the environmental impact of each individual product so buyers can be well informed of the climate-related risks of the specific goods they are putting into their mouths.

I am also disappointed to know that Greenyard’s cauliflowers are not organic. This implies that agrochemicals are used during farming, harming the natural habitat and people’s health. Chemical fertilisers diffused in water promote the excessive growth of algae which suffocate aquatic organisms and harm biodiversity. Winds disperse toxic pesticides across large areas, irritating people's respiratory systems. Greenyard did mention that it is seeking to replace chemical herbicides with mechanical weeding methods. I would appreciate it if Greenyard could specify which weeding techniques they are planning to use since not all practices are sustainable. For example, tillage weed control destroys soil structure and causes erosion, causing more environmental damage than leaving the weeds untouched. Greenyard should also address the use of chemical fertilisers and pesticides. It is important for Greenyard to address all kinds of agrochemicals equally and play an active role in limiting environmental damage.

Greenyard’s lack of transparency extends to emission information regarding product transportation. The only thing we know is that the cauliflower comes from farms within 100 kilometres of Greenyard’s production plants across Europe and America. Although the proximity between production and manufacturing sites ensures the freshness and quality of the cauliflower, it will be great if Greenyard can reassure us with the transportation medium and the estimated emission amounts involved.

Greenyard has ambitious goals to create sustainable food chains. One of its main objectives is to reach zero waste. Hence, Greenyard promised to have 100% of its consumer packaging recyclable by 2025. Greenyard also pledged to minimise food waste and help vulnerable people by donating to food charities, hospitals, schools, and restaurants. Greenyard’s commitment to improving resource efficiency through designing innovative solutions led it to receive the Food Heroes Award in 2018 and the Food Waste Award in 2019, both of which are voted for by the public online.

I am also impressed by Greenyard’s ability to respond to the changing needs of consumers looking for sustainable, healthy food with minimal preparation time. For example, I believe cauliflower rice is a brilliant invention that adds value to agricultural waste products. It is evident that the general public and I am not the only ones amazed by Greenyard, since a global community of professional managers, brand developers, and members of the trade press also voted for Greenyard in the 2018 Golden Tavola Award for creating the best innovations in the food industry. I am looking forward to Greenyard providing more creative food choices for customers and have high hopes that Greenyard, a big mainstream corporation, can lead the market trend to transit into a more sustainable food system.