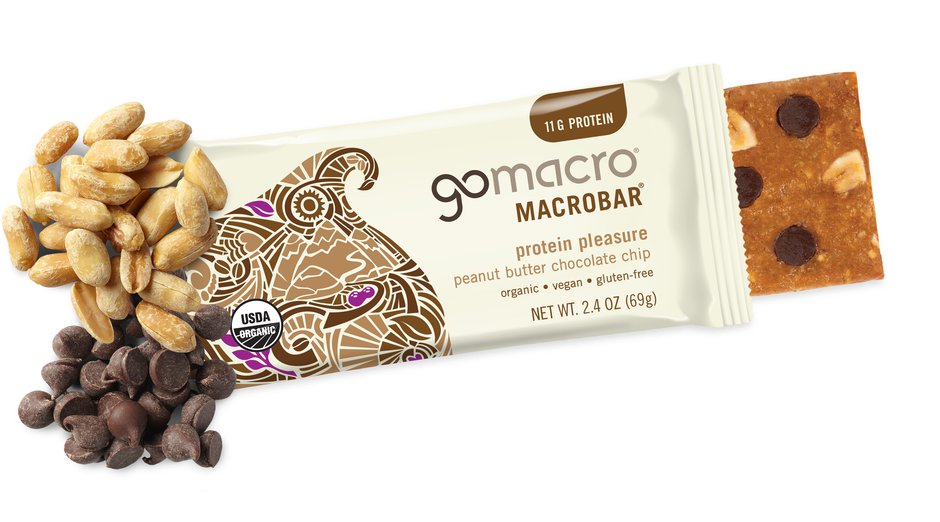 The MacroBar was first produced in 2003 and has grown to help GoMacro promote plant-based lifestyles. I came across them on my search for new protein products and was immediately intrigued by their claims of being 100% renewable-energy-based and 100% carbon neutral. I have yet to try them and cannot offer an opinion on their taste, but their Peanut Butter Chocolate Chip MacroBar is fairly sustainable. The company could be a little more transparent about sourcing and emissions but still do better than most of the protein companies I have seen. I have been looking for a while for an accessible, sustainable, nutritious protein bar, and while the company could benefit from putting out more information, I think this may be it.

The protein bar comes with a list of certifications: non-GMO, gluten-free, vegan, and USDA organic. While the USDA Organic certification does not guarantee that the entire product is made of organic materials, all the ingredients listed on Macrobars are indicated as being organic.

The protein in the bar comes from peas and sprouted brown rice. Rice production is not very sustainable, as it requires large amounts of water and the rice and its residue emit a lot of GHGs during decomposition. However, sprouted brown rice has a higher and more complete protein profile than white rice, which means less of it is needed for a given amount of protein, making it a better choice than any other type of rice. The protein extraction process can also be a fairly clean process (although GoMacro does not specify which method is used), as it can be done through natural enzymes without requiring heating. They also extract some protein from peas, which is generally a sustainable practice, as peas require less water and are nitrogen-regenerative. There are, however, even more options that could be even better for the environment, like fava beans; where peas’ protein extract is about 80% protein, fava beans can go up to 90% and are therefore even more protein-efficient.

This particular flavor also contains, as its name suggests, chocolate chips made of coconut sugar, cocoa butter, and cocoa. These are also certified as organic, non-GMO, and fair trade. Cocoa can be shaky ground for social sustainability, but GoMacro directly mentions their source: Agostoni. The company’s vertical integration allows them to be directly involved in all steps of their chocolate production, facilitating long-term relationships with—and therefore economic security for— their cacao farmers. I found their environmental factors to be more lacking, as their information is a little vague. They say that they use only natural gas (which does have lower emissions than other fossil fuels but is obviously not renewable), but have brought down their energy usage by 15-20%. This last part holds no value without more information: reduced with respect to what? Since when? Are there efforts to reduce it further or look into more renewable energy sources? Their certification of being organic also is a little confusing; only about 50% of their beans are grown organically, and I’m guessing it’s this half that provides ingredients to GoMacro. While it is nice that GoMacro is transparent about their chocolate source, it would be nice if the source itself was a little more green. The other ingredients do not have specified sources other than a claim to be “sustainably sourced.” While it might be overwhelming to reveal the sources of every ingredient of every product, I think it would be beneficial. Only some ingredients have mentioned sources, so it makes me wonder why the others are not also revealed: is there something purposefully hidden? Or is it just a choice to keep away from information overload? Since I do not know which is the answer, I cannot draw further conclusions about sourcing but would recommend the information be shown for increased transparency.

GoMacro builds their bars through cold-pressing, which means there is no heat required for assembly. The lack of heat also helps the ingredients retain their natural nutritional value, so there is less of a need for additives or fortification.

They are also certified C.L.E.A.N. (conscious, live, ethical, active, nourishing), although that certification seems to have more to do with personal health than ESG health. They do have a requirement of “low processing,” but that category includes being organic and non-GMO. That inclusion is fine, but it does not necessarily mean that a product is less processed in its manufacturing stages. The requirement does also state that the product or its components must not be heated to above 212°F, which does somewhat imply less energy expense (at least as it pertains to heating).

GoMacro is a mother-daughter owned company that values both environmental and social sustainability. They already use 100% renewable energy and are 100% carbon neutral and are now looking to become Zero-Waste Certified. In 2020, they had a diversion rate of 64.2% through recycling. Instead of throwing away food scraps or bars that can’t be sold due to minor reasons, they donate them to local farmers and organizations. One thing that stood out to me was that they are trying to reduce their non-landfill waste as well, even past the required 90% diversion rate for the certification. For example, they state that even though they were able to recycle 35,000 nut butter pails in 2020, they are working to find alternatives that would not require pails in the first place. While there are no concrete steps listed to this plan, I appreciated the fact that they recognized the importance of cutting down on all waste mass where possible.

Their renewable energy comes from rooftop solar panels and renewable energy credits from local wind farms. What really caught my attention, however, was the fact that not only do they use renewable energy but they also fund the purchase of RECs for the entire village around their headquarters; the village is entirely powered by renewable energy, either wind through RECs or surplus from GoMacro’s solar farm.

While they are carbon-neutral, some of it is due to carbon offsets, and given the transparency with most of their information, I was a little surprised to not find their company emissions. They did mention, however, that they planted 7,371.5 trees to offset their emissions, which would translate to roughly 184 tons of emissions (based on the fact that about 40 trees are needed to offset each ton of CO2). Nowhere was it specified that the trees are the only way they are offsetting, so I am hesitant to draw any conclusions based on the calculated number. Given that their listed goals include public transparency, as well as a reduction of their carbon footprint, I would recommend that GoMacro add information about their emissions and where they are coming from. This would also show consumers that they are serious about their goal of reducing emissions, as that requires they carefully track from where most of it is being emitted.