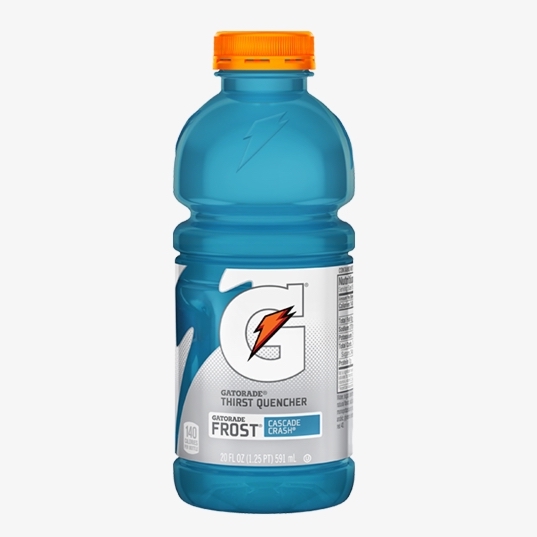 As an avid sports player and watcher for a majority of my life, I am very familiar with Gatorade and the image of incredible sports performance they promise. During the basketball and soccer games I played, it wasn’t unusual to see Gatorade bottles in a rainbow of colors around the court, field, and bleachers, highlighting it as a favorite beverage for athletes and spectators alike. As someone who’s seen more than their fair share of hundreds of the iconic plastic orange bottle caps littering the floor, I wondered if Gatorade would have sustainability initiatives set to offset their plastic output. While compiling this review I was disappointed (but honestly not surprised) that Gatorade was a less-than-stellar brand, and I was truly shocked at how bad of a drink it was for consumption, especially since it’s marketed as a product for athletes and enhancing athletic performance. Gatorade sponsors some pretty hotshot athletes and sports events, but this can be dangerous because they promote such an unhealthy product that will inevitably be sold in greater numbers as their spokespeople continue to give it their celebrity endorsement. Even though your favorite sports player may tell you that the brightly-colored drink is the secret to their success, maybe sticking to water is the best idea.

Gatorade does not list their product ingredients on their website (red flag!), and instead the nutrition facts label and ingredient list can be found on their parent company’s website, Pepsico. For a product that claims to be the most “scientifically researched and game-tested way to replace the electrolytes you lose in sweat,” the ingredients took too much time to find, and don’t really support their “scientifically tested” message by making the ingredients linked on another website, making it hard for consumers to find if they don’t have a bottle in hand. And you’d think a sports drink that’s called “thirst quencher” might have some healthier ingredients, but Gatorade’s three main ingredients are just different forms of sugar, contributing to the 34 grams of added sugars in a 20 ounce bottle. From the nutrition facts label (which lists ingredients in order of greatest concentration to least), sugar is the second highest, making it the ingredient that has the second greatest concentration in the drink. About 60-70% of sugar is produced from sugar beet, and its cultivation and production causes heavy environmental impacts through habitat loss, intensive use of resources like water and energy, discharge and runoff, and the heavy use of agro-chemicals. Agro-chemicals are chemicals used for fertilizer, soil stabilizers, pesticides, and insecticides, and can create huge amounts of chemical residue. Dextrose is an ingredient responsible for raising the body’s blood sugar, and high blood sugar releases insulin. Two other ingredients are sodium citrate and monopotassium phosphate, which are used in electrolyte replenishment. But the other ingredients– citric acid, salt, “natural flavor,” and yellow 5– are used for flavoring and color. Two other ingredients are gum arabic and glycerol ester of rosin, which are both food additives used as emulsifiers and to keep oil suspended in water. Each of these named ingredients poses an issue for human health, which is not a good thing when these issues stem from a sports drink to help athletes, who should be consuming a healthy and balanced diet. Citric acid is made from raw, natural materials and is biodegradable, but it can break down tooth enamel, leaving teeth exposed to bacteria and tooth decay. Salt serves as an electrolyte replenisher, but as for natural flavor, I have no idea what it is composed of, as it’s so vague– what is the flavor trying to emulate, and what makes it natural? Yellow 5, or tartrazine, is an artificial dye derived from petroleum. Petroleum is a major red flag in the sustainable energy industry, and also poses problems in the health department, as it can increase hyperactivity in children and the risk of cancer. Gum arabic is an emulsifier used in many confectionery treats, like icings, fillings, and chewing gum. It is made from the acacia gum tree, which is a sustainable resource and protects biodiversity, making it one of the few sustainable ingredients on Gatorade’s ingredient list. Glycerol ester of rosin acts as a stabilizer in Gatorade, and is made primarily from the stumps of longleaf and slash pine trees. There is no information on how this ingredient is harvested, but if they harvest the wood unsustainably for this ingredient, that is a major concern as well.

How is Gatorade made? I’m asking you because I don’t know either. The only information I could find online was that all the ingredients are mixed (helpful, right?) into a cohesive, unnaturally colored drink. An article online also reveals that Gatorade is heated to a pasteurization temperature to kill bacteria and prolong its shelf life, but the boiling Gatorade is poured into the plastic bottles while it’s still hot. This is extremely dangerous, as hot liquids in any plastic container can cause the additives in the plastic to leach into your drink. These additives are carcinogenic, which means they can cause cancer and hormone disruption in your body. The only reason why this portion of the review isn’t less than 0.5 is because the Gatorade plant is a green building, and the largest food and beverage production facility to achieve LEED gold certification. The plant has committed to sustainability in material use (for the construction of the building), sediment control, water and energy usage, efficiency, and employee welfare. The plant recycles its energy, and has decreased its water use by implementing a waterless bottle-rinsing system. The plant is more efficient and productive, and this is a brownie point for a company that provides little else in the product manufacturing process.

Gatorade is what people nowadays would call “sus.” Their products are marketed for athletes and non-athletic people alike, but they specifically target young athletes by sponsoring popular professional sports players. The sugar content of Gatorade is extremely high, yet it is stated that Gatorade is safe for infants and toddlers to drink! It is technically “safe” for infant consumption in that it’s drinkable, but the health benefits are extremely lacking, and cause more problems than what it was intended for. The company continues to market it as a “better-than-water” alternative, yet do not tell the public in their dramatic black-and-white ads that the drink is mostly made of sugar. This is definitely not ethical and not transparent at all- and the average consumer would never know unless they took a good look at the nutrition facts label and did all the research I’m doing now. As I’ve outlined in a previous review, PepsiCo (the parent company of Gatorade) is not the best in terms of sustainability. Their nutrition facts are hard to find, and they don’t detail on how they follow through on their sustainability initiatives. Many of their smaller holdings practice sustainable methods, but the parent company itself should as well, and set an example for others to do so.