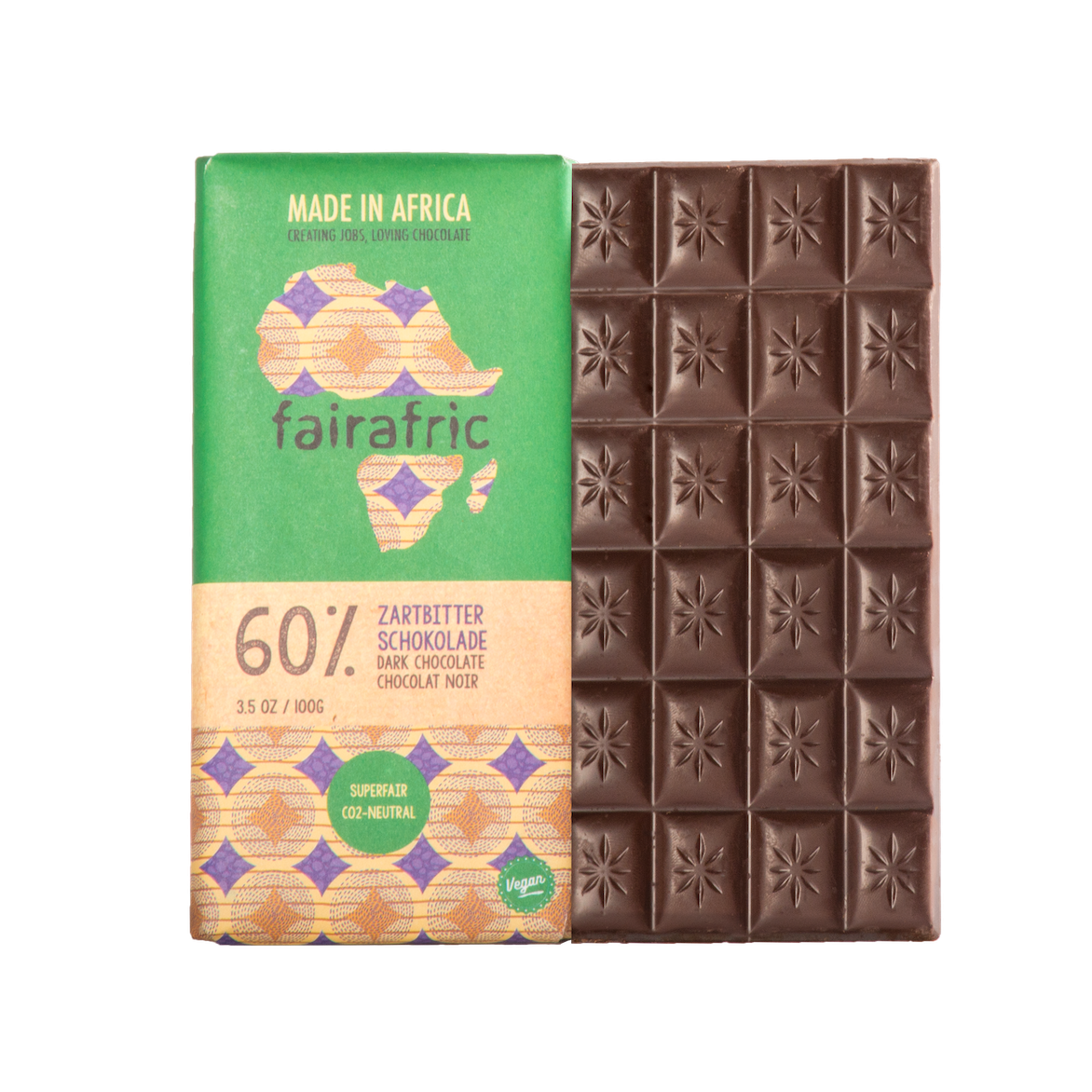 Fairafric is a German-Ghanaian owned chocolate company, and all their chocolate has 100% organic ingredients. Their business model is unique because they do not import the cocoa beans from the cocoa-producing country; they buy the finished product from Ghana. This practice allows more of the profit made from selling the chocolate to stay in Ghana. Their efforts to be sustainable and organic comes at a cost (640 g of chocolate costs 19.90 euros). They sell the chocolates in physical stores in Germany but also on their online store. I wanted to review this chocolate because the company is very transparent about sourcing and their efforts to be sustainable. I was also impressed by their ability to make fully organic chocolate and their unique production model. I hope we see other chocolate companies adopt this model.

The chocolate is made from cocoa beans which are farmed and processed into chocolate in Ghana. They also use milk powder and sugar to make the chocolate (along with other ingredients to make the individual flavours). They explain that the sugar cannot be sourced organically in West Africa, so they have to get it from farms in Mozambique that produce fully fairly traded and organic raw cane sugar. The juice from the cane is extracted, purified by heating it, and recrystallising. Their producer in Mozambique does not give information on how they get the energy for this process, or how it gets to the Fairafric factory in Ghana. I would expect Fairafric to account for hte carbon footprint of transportation over such a long distance.

The milk powder is sourced from the Schrozberg dairy factory in Germany. They explain that they cannot source milk powder in Africa, although they would like to, because there are no suitable producers. The milk is organic (cows are fed 100% organic fodder and are often outdoors). The milk is certified Demeter standard, which means that the dairy farms are committed to animal welfare and biodiversity preservation. The Demeter standard is the strictest standard for ethical and ecological farming, ensuring that the farm environment is biodynamic (practices take into account the local ecosystems, and animal welfare). The farm is audited by Demeter once a year to ensure they are maintaining this standard. This is stricter than the EU general regulations for dairy farming, so I am happy to see that the company is going above and beyond to ensure correct treatment of the animals and environmental preservation in both milk and sugar sourcing.

The packaging is now fully compostable (by home and industrial standards) as they are using the NatureFlex material from Japanese company Futamura. This is made from cellulose from wood pulp, which Futamura says comes from sustainable farms. Previously, they used to use aluminium packaging, which although recyclable, was generally not recycled in practice and is energy intensive to produce. I think it’s great how they took the initiative to invest in biodegradable packaging even though aluminium is fully recyclable.

The ripe cocoa pods are harvested and the pulp is removed, leaving just the beans. These are fermented for six to seven days and then dried in the sun for a further five or six days. It is now ready to be processed in factories. The factory (owned by the partner Chocomac) is less than two hours away from the farms. This means that they minimise greenhouse gas emissions from transportation in Ghana. From the beans, several cocoa products are obtained (butter,powder, liquid, mass). The cocoa liquid and cocoa butter are mixed in different ratios depending on the desired final product (for example dark chocolate). Sugar is also added accordingly. The chocolate mass is then pressed and conched (heated in various steps to ensure the bitter tasting compounds are evaporated). The cocoa butter mixture is added to get the right consistency and additional ingredients like nuts are added. It is then moulded and cooled. It can now be packaged. They do have unpackaged chocolate that is put in large containers and shipped to Germany, where they can be bought loose.

This is an energy intensive process as there are multiple, long heating steps. Fairafric’s factory is solar powered in order to minimise reliance on fossil fuels for the production process. This is amazing as it shows that renewable energy can fuel such an energetically demanding process. I hope to see other manufacturers rely more on renewables.

The finished product is then shipped to Germany using a reefer. They say that a single journey of the ship from Tema in Ghana to Hamburg in Germany releases 1208 kg of carbon dioxide, due to the humidity and temperature controlled atmosphere. In comparison, a normal ship would release only 876 kg of carbon dioxide for this journey. They have invested in carbon-offsetting causes with natureOffice (a German to compensate for these emissions. One of these is for reforestation in Togo, where their partner (natureOffice) planted 1.5 million trees and four wells. The second project was to supply people in Ghana with clean cookstoves, reducing their reliance on charcoal, which causes breathing problems and higher emissions.

These initiatives do help reduce carbon emissions and are a step in the right direction but it is unclear if they outweigh the high emissions from transportation completely. I hope that they release statistics about their annual emissions/energy usage so we can see if they’re trying to reduce it as much as possible, although these causes they’ve invested in definitely do help the local communities as well as lower emissions.

There are 861 cocoa farmers that produce the chocolate Fairafric buys, and they are all part of the organic cooperative called Yayra Glover Ltd. The cooperative pays for the farmers to become certified organic, along with training them on sustainable farming practices and increasing yield. The cocoa is fully organic, so therefore, fully traceable to these farms. The farmers are also trained in sustainable and organic farming, which Fairafric claims increases their long term yields, showing that organic farming does not decrease yields.

Since Fairafric buys the finished product from Ghana, the country can make a lot more money as they’ve added a lot of value in the manufacturing and production stages. This is relative to the traditional model where companies buy the cocoa beans and import them to the country the company is located in. 43% of the price of the chocolate (excluding VAT) goes to Africa, along with the new jobs generated in the processing and production centres. A further 42% goes to the retailers and the remaining 15% goes to Fairafric itself.

Relative to other certifications, Ghana earns more per tonne of cocoa beans when the chocolate is sold to Fairafric ($10,000 per tonne). Fairafric pays an additional $600 premium per tonne directly to farmers. In comparison, companies which buy the cocoa beans pay Ghana around $2,350 per tonne and a much smaller premium, depending on the type of certification ($240 for fairtrade,  €102 (+5%) for UTZ). This means that Ghana can better profit off of its natural resources if the jobs that generate the most value in chocolate production are based in Ghana itself. According to the World Bank, each job in agro-processing generated 2.8 additional jobs in the wider economy. This would allow cocoa-producing countries like Ghana to rely less on imports, contributing to the decolonisation of the chocolate industry.

Fairafric production employees have free health insurance and commuting, working 36 hour weeks. The starting salary (converted from Ghanaian cedis) is approximately $225 a month, much higher than the Ghanaian minimum wage of $55 a month. This means that there is higher employee satisfaction and loyalty to the company.

Fairafric also has a zero-tolerance policy for child labour on its farms. The farmers are educated about the importance of educating their children to ensure their future, rather than working in the farms. This is part of the sustainable training they receive from the cooperatives Fairafric works with. Fairafric says that most of the additional money the farmers receive from them goes towards their children’s education. This shows that they’re paying the farmers enough so they don’t have to resort to child labour. Since the reason behind most child labour is low wages for the farmers, the Ghanaian government gives farmers additional payment of $400 called the living income differential, which helps bridge the gap between the paid wage and the living wage. Fairafric’s premium helps this further, but they acknowledge it needs systemic change in the wage system and the global chocolate market to create a long term solution.

Overall, I am impressed by their ability to create a fully organic and traceable chocolate product. Their business model of producing the chocolate fully in Ghana allows for the decolonisation of chocolate. I really like how they are committed to ensuring fully ethical conditions. Obviously, this comes at a cost to consumers, but we must be willing to pay more if chocolate production can go on ethically.

FAQ – fairafric – Chocolate Made in Africa

How is a cocoa tree cared for? – fairafric – Chocolate Made in Africa

fairafric is a climate-neutral company for the second year in a row! – fairafric – Chocolate Made in Africa

‘It cannot really be used with a clear conscience:’ Chocolate brand Fairafric on its decision to ditch aluminium foil for wood pulp alternative (foodnavigator.com)

Child labor in the cocoa sector – fairafric – Chocolate Made in Africa