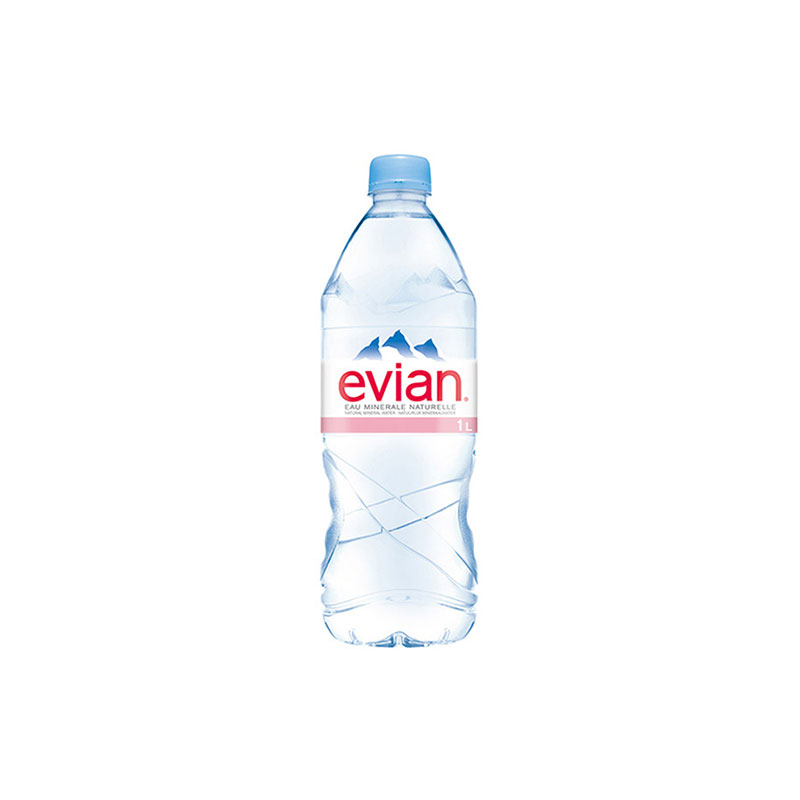 Evian is a French company most well-known for bottling and commercialising mineral water from sources near Evian-les-Bains on the south shore of Lake Geneva. Although the water at Evian has been found to have health benefits, many disagree with the foundations on which the company is based since it produces over 2 billion plastic bottles per year to people who, for the most part, already have access to clean water. Without considerable efforts to make the processes clean and sustainable, it seems unlikely that the supposed health benefits can outweigh the environmental damage caused by bottling such large amounts of water.

This review will be based on the ‘everyday range’, which is the most popular subsection of products.

Recycled polyethylene terephthalate (rPET) is used to package the water. This results in 50% lower greenhouse gas emissions compared to using virgin PET for packaging production. The plastic bottles used in the ‘everyday range’ are made from 25% rPET (excluding the label and cap). There is significant progress that can be made here and, although there are collaborations in place with Closed Loop Fund to increase collection and recycling rates for example, there doesn’t appear to be much actually being done to resolve the issue. There is little information available stating how the product is disposed of at the end of its lifecycle.

Evian appears cautious of the environmental impact involved with sourcing their water. There is active work being done alongside local communities in the source area to ensure a sustainable future. As well as this, Evian co-founded the Association for the Protection of the Evian spring Water Impluvium (APIEME) alongside 13 other municipalities over 25 years ago to help preserve the source and promote agricultural practices in the Evian-les-Bains area.

Evian has a unique bottling site, running on 100% renewable energy generated from both hydropower and biogas. Both ISO 50001 and ISO 14001 certifications have been awarded for sustainable practices, proving that action is actually being taken to support claims.

Transport is an area acknowledged by the company to require improvement, and there claims to be a continuous effort to lessen environmental impact by increasing efficiency where possible. 75% of bottles are transported from the factory in France to harbours since trains produce a carbon footprint 10 times smaller than trucks or other motor vehicles. By partnering with the Environmental Defence Fund Climate Corps programme local transport carbon emission reduction is advanced. The logistics team is equipped with a carbon calculator so that carbon impact can be incorporated into decision making.

Evian is a Certified B Corporation, meaning that it meets high standards of verified performance, accountability, and transparency from employee benefits and charitable giving to supply chain practices and input materials. This does not however necessarily translate to positive behaviour since only 80 out of 200 available points are required for certification, and so a company can meet B corporation requirements despite degrading the environment in other areas where they did not obtain points.

In April 2020, Evian was globally certified as carbon neutral by Carbon Trust. Carbon Trust is a reputable group and so the carbon neutral label can be trusted. As well as this certification, Evian publishes information about their energy producers and their plans to offset remaining emissions to ensure maintenance of carbon neutrality. There is little information available about any worker’s rights or the diversity of the workforce.